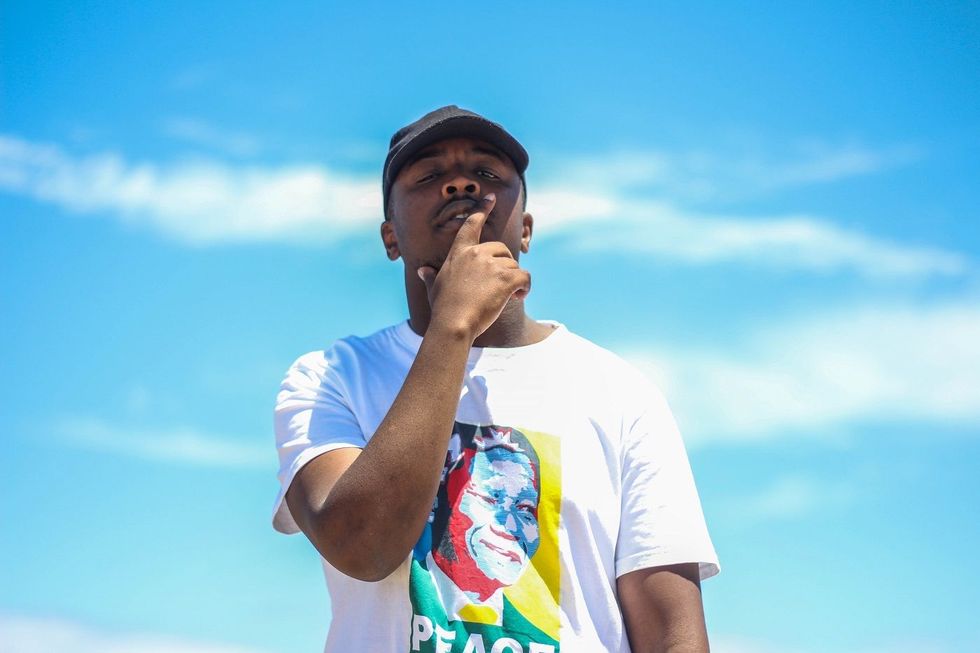 For a long time, professionally shot music videos were nothing but a dream for a majority of artists – especially hip-hop artists – in the black townships of Cape Town. Only the rap crew Driemanskap, which was signed to the indie label Pioneer Unit, had proper music videos.

In the past two years, that has changed with the emergence of a young filmmaker Mpendulo Mabindisa, who is from the township Khayelitsha. Under his belt, Mabindisa has videos by notable Cape Town artists like Driemanskap, Andy Mkosi, Amilca Mezarati and Phoenix, among others, and more videos by Rattex, Phresh Clique and Kanyi are in the works.

Mabindisa, who also calls himself Motion Billy, saw a gap and filled it. “I’m willing to take the money that the big production companies don’t want to take,” he says during a chat I had with him in Woodstock, Cape Town. “These artists are making really dope music.”

What ties together most of the videos Mabindisa has directed is his persistence on being conceptual. For instance, the set for a video he shot for the up-and-coming duo Hype Team, is minimalistic yet refreshingly creative. There’s a scene with a bed in a desert, where the story revolves. The video, which he shot last year, was the first of his work to get playlisted on MTV Base.

“I challenge myself,” says Mabindisa. “These days it’s easy to shoot music videos, with the cameras we have at our disposal. But I want to separate myself. I will take a bed to a bush, I will go to a dead space, an old car museum, and give those environments life. I just like to be more artistic with it. I want to use the stuff I have around me. I don’t want to tell the same story in the same tired ass way.”

I’ve been on set with Mabindisa many times. He admits working with artists he grew up listening to, like Driemanskap and Kanyi, was intimidating, but he’s either being modest or just knows how to hide it real well on set. He handles himself like a virtuoso. One thing you can’t take from him is his skill and confidence. “I won’t forget to tell you that I’m good at what I do,” he says with a chuckle. “Because no one did me any favors. I worked hard. I used to holler at a lot of local artists but they ignored me, but now they’re the ones hitting me up.”

Mabindisa’s journey started at the private college, Damelin, in 2010, where he studied sound engineering, but couldn’t graduate because his fees weren’t settled. Like, for real, fees must fall. During the two years he was studying sound, he developed an interest in film. So when he couldn’t graduate, he volunteered at a film company for a year, specializing in lighting on sets. After a year, he got employed by the same company. But after a year of employment, he quit and went to study film at the Cape Peninsula University of Technology. “I just felt like there was a lot I still needed to learn,” he says.

The first video Mabindisa did, in his first year of studying, was a collaboration with a friend who had just graduated. The video was for a song from a compilation Mabindisa had put together by artists from his hood, Khayelitsha.

His growth since then has been nothing short of amazing, getting called up by established directors to assist on set, mostly with lighting. “I was on set with Ice Prince recently,” he says. “For his video for ‘Excellency’ in Camps Bay, Cape Town. I’ve helped on sets with the likes of Emmy Gee, Jah Prayzah, Tweezy, Bigiano and a few more.”

I ask him about how difficult it is for him as a young black filmmaker to work in a very white industry in an equally white city like Cape Town. He’s keeping mum about the details, and gives a safe answer: “Having had to work on sets, I’ve seen how the game is, and I just use that to grow my own hustle, like, ‘Work hard, start your own shit.”

As we chat, the man looks deprived of sleep, with dark rings under his eyes. Almost every weekend, he's up as early as 4am to travel to the shooting location, where he will either shoot all day until as late as 10pm, or will finish around 4pm and head off to another shoot. He stays up editing until past midnight, sleeps for about two hours. Then rinse and repeat.

But all that hard work doesn’t necessarily equate to a fat bank account. “I’m super broke but I’m at a happy place,” he says. “I just shot six music videos in two weeks, and they all look dope.” Working with artists who have a very limited budget means sometimes he will spend all of it on production costs, and be left with nothing for himself. Several times, he has exhausted the artist’s budget and dug into his own pocket. One such video is the aforementioned Hype Team video. “I funded that video with my own money because I really wanted to see the concept come to life,” he says. “Some people who are close to me questioned that.”

Mabindisa has always had a do-for-self attitude since we became friends circa 2010, starting his own music blog to cover artists most media platforms would otherwise overlook. He believes one of the reasons most black filmmakers don’t succeed is that they are afraid to try and fail. “Some are stuck in toxic jobs, because they feel their way forward is there,” he says. “Most black filmmakers are waiting to be discovered.” His tone changes to a didactic one when he says, “black artist, stop waiting for a fucking cosign. People are waiting. What the fuck are you waiting for?

“Shout outs to Ofentse, though,” he interjects. Ofentse Mwase has shot stunning music videos for most of the indie label Ambitiouz Ent artists—the likes of Emtee, Saudi, A-Reece and Fifi Cooper. “He’s doing some great work. For a young black man to be in that position, it shows that there is hope. He’s one of the busiest music video directors in SA and he’s also a great cinematographer. I just like the aesthetic. He pays attention to detail. Black filmmakers who specialize in music videos hardly ever reach that level.”

Even though Mpendulo likes shooting videos for artists in the hood, it won’t be long until the mainstream catches on to his creativity. He wants to carry on shooting music videos, but also foray into commercials, promo videos (like this one he did for the street brand Mos Wear) and documentaries. “I want to start building relationships with young entrepreneurs mostly in the township, and shoot promotional videos with them. I also just want to grow as a director, because sitting here now, I know that I know nothing.”