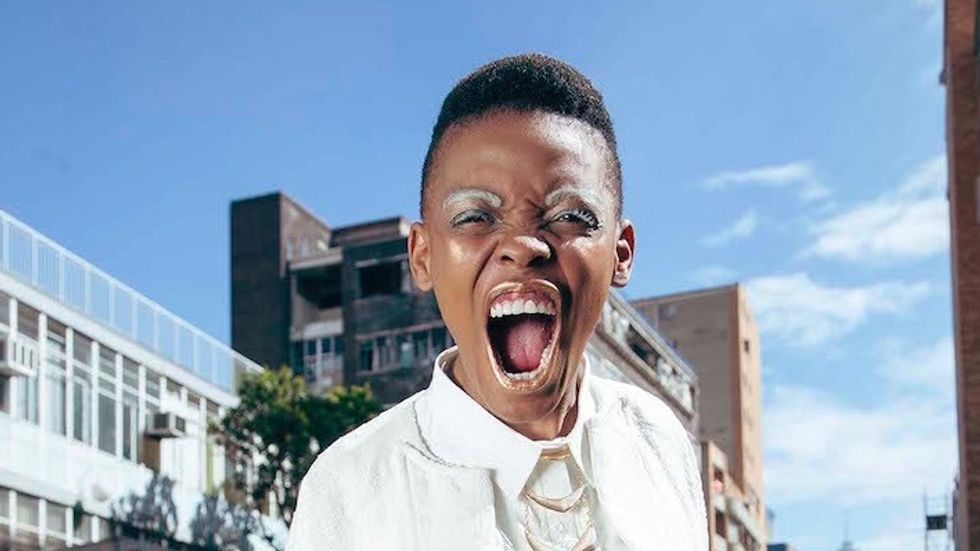 'Lost In The World' tells the story of a South African police officer seeking revenge after her girlfriend is raped and murdered.

Xolelwa ‘Ollie’ Nhlabatsi’s Lost In The World tells the story of a South African police officer seeking revenge after her longtime girlfriend is violently raped and murdered. The cop, played by Johannesburg-based actress and stylist Honey Makwakwa, loses her mind and soul in the process of looking for the perpetrators.

After making its world premiere at Pretoria’s Independent Mzansi Short Film Festival in July and its European premiere at Greece’s Thessaloniki International LGBTQ Film Festival in September, the film will have its UK premiere this week at London’s Film Africa, where it’s been nominated for the Baobab Award for Best Short Film.

The film’s Swazi-born, Wits-educated writer and director says his style is a mix of Neo noir and dark comedy. Nhlabatsi, who tells us he wanted to write a film about “love lost and revenge,” says he found the inspiration for his latest project from listening to Kanye West’s My Beautiful Dark Twisted Fantasy standout “Lost In The World,” which he interpreted as a song about “losing someone close but finding the strength to overcome it.”

At the time, Nhlabatsi was assisting a group of German journalists who had come to Johannesburg to investigate corrective rape. “After listening to the stories and hearing that the police hadn't solved any of the cases, I wanted to make a cathartic film for the victims and to a larger extent anyone who had suffered similar that maybe they could find some hope or strength,” Nhlabatsi writes in an email to Okayafrica.

On the main character, Whitney, Nhlabatsi says she is an independent, fierce police officer. “Being both a female and lesbian it made her career especially difficult as other female officers didn't engage with her and most male officers found her either distasteful or a source of laughter,” the filmmaker tells us. “She found her strength with the love of her life Palesa, but when she couldn't save her it turned Whitney into a wraith with one single purpose.” Nhlabatsi says he based the character off of Helen Mirren's role as Jane Tennison in the Prime Suspect series.

Ahead of the UK premiere, Nhlabatsi’s Blackweather Productions has shared the film's powerful trailer along with a bold, Johannesburg-shot editorial starring Makwakwa. “The theme of the photo shoot was to make Honey an angel of revenge,” Nhlabatsi tells us. This was then interpreted by the film’s co-producer, Mzu Nhlabati, and photographer and production designer, Gugu Khumalo.

Keep up with 'Lost In The World' on Facebook and Twitter. The film features original music composed by BLK JKS drummer Tshepang Ramoba.