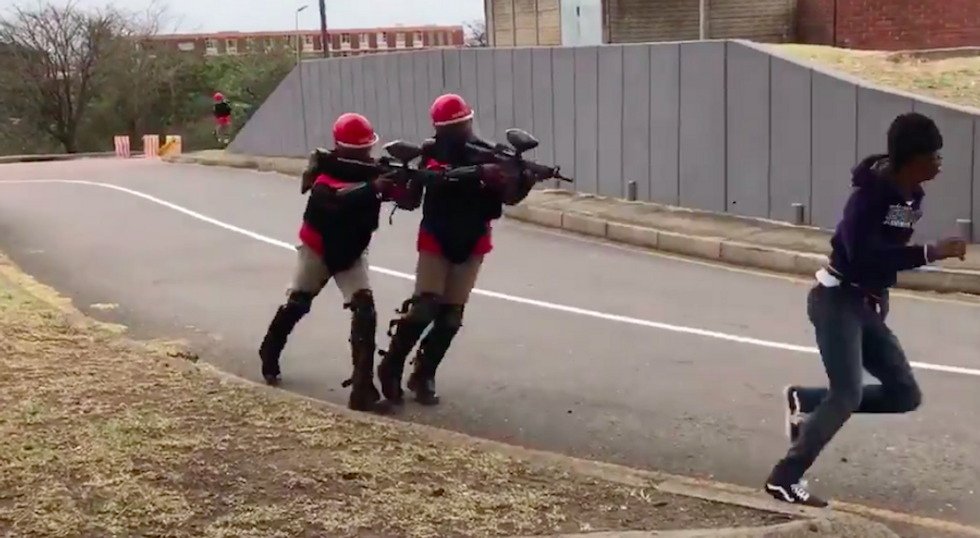 "Media says we're protesting slow wi-fi, but it's way deeper than that."

South African students at the University of KwaZulu-Natal (UKZN) in Durban, have run into clashes with the police after protesting their school's substandard living conditions.

Classes were cancelled earlier this week when the protests first began and up to 18 students were arrested during a walk-out. The situation escalated once again on Friday when student protestors were met by police forces who dispensed teargas after students allegedly pelted police water cannons with rocks and set fire to a guard house. So far, seven students have been arrested in today's run-in, South Africa's East Coast Radioreports. Campus is currently a "no go area."

A video shared on Twitter shows students being chased down by police officers.

While several reports have emphasized the student's complaints about slow wi-fi, many students have taken to social media to show that the protests are about much more than just wi-fi—though reliable internet is absolutely necessary for students to do be able to do their work. Many have shared images of the poor, unworkable conditions of their living quarters using the hashtag #Kwazekwanzima.

Please don't diminish the reasons for the #ukzn strike by highlighting the wifi issue problem and not the problems… https://t.co/vdj8nOHDvT
— 𝑘𝑒𝑟𝑖 (@𝑘𝑒𝑟𝑖) 1534504795.0

Since i got to ukzn. Students have been striking for same things and the university doesn't really care. I have bee… https://t.co/l5lBjvL7LR
— Leadership speaker (@Leadership speaker) 1534192024.0

Images from social media show rat-infested dorm rooms and kitchens, inefficient laundry rooms, storage rooms used as makeshift dorm rooms, and other adverse conditions that have left students vulnerable to further harm. One student, Twitter user ZeeCrabby, says a fire broke out when one of the kitchens was converted into a storage room, which led to student's belongings being burnt.

Other students had similar stories to share of roof leakages, broken showers and more. 'Media says we're protesting for poor WiFi but it's way deeper than that,' wrote one student.

#kwazekwanzima @ Ukzn this is our so called "laundry" with two working washing machines and two dryers while the r… https://t.co/iqlhkOfiIQ
— Bongiwe_senamile (@Bongiwe_senamile) 1534349909.0