7 Times South African Women Have Made History This Century 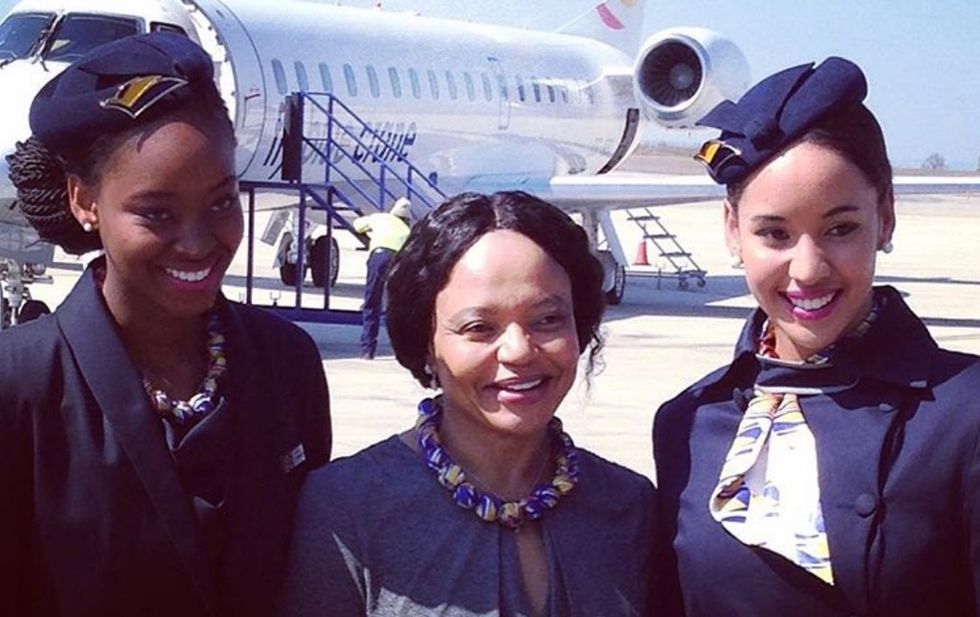 As Women’s Month comes to a close, we look back at just a few of the glass ceilings shattered in South Africa since the 1956 Women's March.

Throughout August, South Africa celebrated 60 years since Charlotte Maxeke, Helen Joseph, Rahima Moosa and many other fierce activists led a march of over 20 000 women to the Union Buildings in protest against the use of passes by women. Here at Okayafrica, we've been reflecting on the achievements of phenomenal black women, like these eight writers who changed South Africa's literary game.

As Women’s Month comes to a close, we look back at just a few more of the glass ceilings shattered since the 1956 Women's March. Below, we reflect on seven times South African women have already made history this century.

South Africa’s print media, as with many other industries, has long been dominated by men. The 2004 appointment of Ferial Haffajee, then 36, as the first woman to edit a major South African newspaper was a tremendous milestone for women in the newsroom.

“As a female editor, in South Africa, I will bring a different touch to the M&G. I will want to use our investigative resources to look at some pretty serious gender problems we have - like the rate of rape and the rate of sexual violence,” Haffajee told AllAfrica at the time of her appointment as the editorial head of Mail and Guardian. “I hope that we will be able to profile the many young, black or coloured women who are coming up through the ranks, be able to show a different form of leadership in the way that I represent, I think, a different shape of leadership.”

After leaving Mail and Guardian in 2009, Haffajee joined City Press as Editor-in-Chief. She resigned from the post in July. Next up for Haffajee? She'll join the business news publisher Bloomberg as a writer beginning in September.

After being implicated in corruption with his financial advisor, Schabir Shaik, Jacob Zuma was axed as the deputy president by former president, Thabo Mbeki, in 2005. It came as a welcomed surprise when Phumzile Mlambo-Ngcuka, then 50, was appointed as the country's first female deputy president.

Although women had been an integral part to the struggle, Mlambo-Ngcuka’s appointment marked the first time a woman had come to occupy such a high position in government. With the dawn of a female deputy president came the hope that South Africa can one day elect a woman president. During her tenure, she oversaw programmes which were centred on poverty alleviation with a specific focus on women.

In 2013, Mlambo-Ngcuka was appointed as the Under-Secretary-General and Executive Director of UN Women. "By providing more opportunities for women…we can ensure that women can play central roles in the rebuilding of our nations,” the UN Women ED said in a statement on World Humanitarian Day this month.

The distinguished Nkosazana Dlamini-Zuma, former Minister of Health and then Home Affairs, was appointed in 2012 as the first woman to chair the African Union (AU) Commission, a body focused on promoting cooperation between a number of African countries. Taking over from her predecessor Jean Ping, this was yet another significant boost to the recognition of women in senior political positions on the continent and a testament to how this would indeed be the African Women's Decade.

Under the leadership of Dlamini-Zuma, the AU declared 2015 the Year of Women's Empowerment and Development.

This year marks the end to Dlamini-Zuma's tenure at the AU and there is much speculation that she could very well become the ANC's next presidential candidate.

Thuli Madonsela Faces Off with Zuma

Thuli Madonsela, an advocate and the Public Protector of the country, came under the spotlight in 2014 when she boldly stood up against corruption in light of the claims of the president having allegedly spent an unsolicited amount of R250 million on his homestead, Nkandla.

This year marks the end of her seven-year tenure as the Public Protector. In an August interview with Marie Claire, Madonsela opened up about her plans to take a sabbatical wherein she hopes to teach and resume practising the law and write her memoir.

In 2015, South Africa saw its largest student uprising since 1976. Students from all over the country came together and marched to the Union Buildings protesting against the proposed fee hikes in tuition at universities that threatened to financially cripple and exclude many students. The movement was largely begun by two young women forces, Shaeera Kalla and Nompendulo Mkhatshwa, outgoing and incoming presidents of the Student Representative Council (SRC) respectively at Wits University. As with the march 60 years ago, the spirit of Imbokodo Lead, women taking front and centre, was alive in our young women and saw the president agreeing to a 0 percent increase in fees.

Sizakele Mzimela, then 49, smashed the aviation ceiling last year when she became the first black woman to establish an airline. The former South African Airways (SAA) CEO made history in 2015 when she co-founded Fly Blue Crane and went on to launch the airline's first international flight earlier this year. Mzimela has broken through some of the boundaries and barriers which often impede the road to success of many women, especially black women.

Asked to offer some advice to women in an interview with Runway Girl Network, Mzimela shared, "Understand that we [women] just have to work harder. It’s unfair, but you spend less time complaining and more time finding a way to move on and break through regardless of the difficulties."

After a lengthy break from the track, Caster returned to fly the South African flag high in Rio this month. The 25-year-old middle-distance star breezed past Burundi's Francine Niyonsaba and Kenya’s Margaret Wambui into first in the final of the women's 800m, making her the first black South African woman in history to win an Olympic gold medal.

In the face of snide and underhanded responses from competing athletes, Semenya remained gracious and South Africans continued to fiercely defend against attacks on the Olympic champion.

Semenya herself later took to social media to thank South Africa for their continued support. "Thank you everyone for supporting me throughout the championship, for showinme love and for believing in me. To my fellow South Africans. Here is our medal. We made it," she said.

And once again, we present to you, our Queen of 800m & Olympic Gold medalist Caster Semenya, our Golden Girl pic.twitter.com/F6uJvdw7i4