#ZumaMustFall: South Africans Take to the Streets In Protest 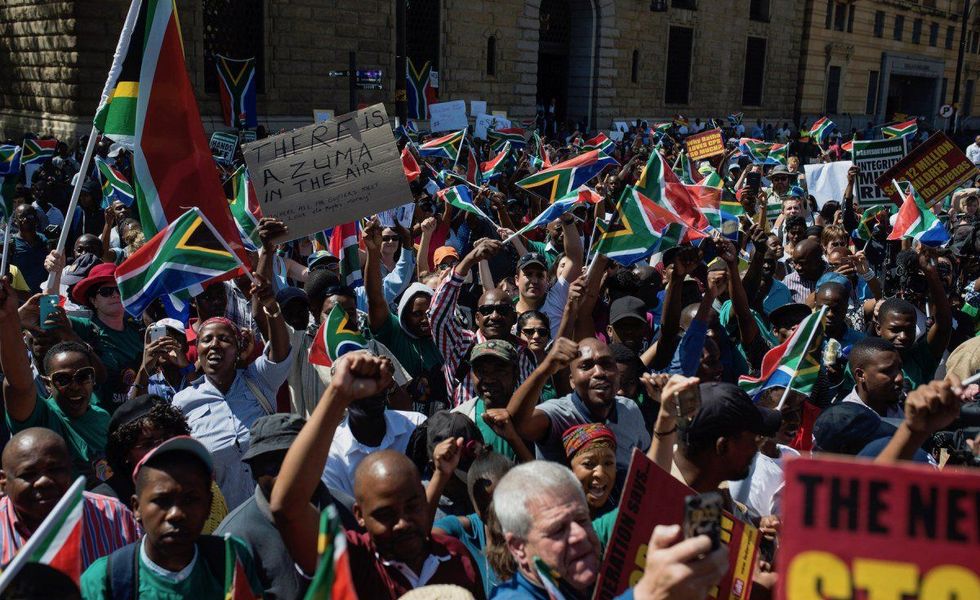 South African in Cape Town, Johannesburg and Pretoria are gathering for anti-Zuma protests.

South Africans across the country have gathered in the streets today to protest corruption and demand the resignation of President Jacob Zuma.

Protesters made plans to gather near the ANC's headquarters in Johannesburg, leading to increased police presence in the area. Crowds also met at the compound owned by the wealthy Gupta family, who maintain ties to the president.

BBC reports, that police fired tear gas and rubber bullets at protesters during one of the demonstrations in Johannesburg.

Others have assembled in Church Square in the capital city, Pretoria.

Scores of people have gathered in #ChurchSquare in support of #ZumaMustFall campaign #AMLive#sabcnewspic.twitter.com/tS4GYZggf5

Not everyone who believes that #ZumaMustFall are supporting the protests, however. Many Black South Africans, question the movement's authenticity, and have accused white participants of co-opting the protest in an attempt to save face.

That awkward moment when it wasn't for sale in 1652 either and yet, here you are pic.twitter.com/c4RTIdbXDx

The only thing I've learnt from the #AntiZumaMarches is that white south africans are embarrassingly inexperienced at protesting.

White South Africans rightly have no Struggle songs, they can only sing about Conquest #AntiZumaMarcheshttps://t.co/0FotFCW5n9

White South Africans are really the most delusional group of caucasians hey, it's crazy

So in between stealing land and mispronouncing our names you want to claim unity and participate in selective protesting? #ZumaMustFallpic.twitter.com/A00kB2hksM

It seems that despite widespread opposition, Zuma still maintains a fair share of supporters. Members of the ANC party's youth wing also gathered outside its headquarters at Luthuli House to shield it from protestors. Others have expressed support for what they believe are the president's plans for "radical socio-economic" change, reports the BBC.

Earlier this week, Zuma dodged a request from allied parties to step down from power.