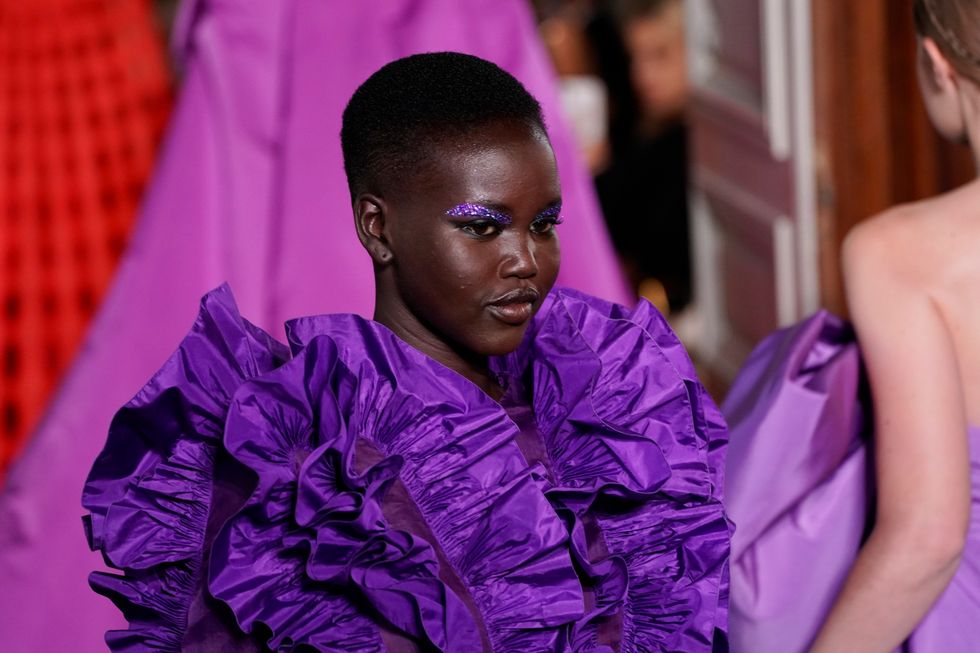 Adut Akech walks the runway during the Valentino Fall/Winter 2019-2020 show as part of Paris Fashion Week on July 03, 2019 in Paris, France. (Photo by Peter White/Getty Images)

"I feel as though this would've not have happened to a white model," said the South Sudanese-Australian model after an image of another model was published alongside her interview in Who magazine.

South Sudanese-Australian model Adut Akech has expressed rightful disappointment after a major publication published a story of her with an image of a different model.

"I feel as though this would've not have happened to a white model," said Akech in a statement shared on Instagram after a photo of fellow model Flavia Lazarus, was published alongside an interview with Akech in Australia's Who magazine. She stated that she felt "angry" and "disrespected" by the blunder. "Not only do I personally feel insulted and disrespected, but I feel like my entire race has been disrespected," she wrote.

The public relations agency responsible for the mixup has apologized, OPR, apologized for the mistake on Monday. "The error was administrative and unintentional and we sincerely apologise for this mistake and any upset it has caused to the models involved, and our client the City of Melbourne," OPR said in a statement shared on Melbourne Fashion Weeks Instagram page. Akech is an ambassador for Melbourne Fashion Week.

Melbourne's Lord Mayor Sally Capp met with the model on Monday to discuss the incident, according to Australia's ABC Adelaide newspaper. OPR is employed by the council.

"I want to say how frustrated and deeply disappointed we are at the @cityofmelbourne regarding what's occurred with our incredible @melbfashionweek ambassador Adut Akech and MFW model Flavia Lazarus," she stated in response to the incident. "Adut is right, we need to do better."

The occurence undermines much of what Akech—who spent part of her childhood as a refugee in Kenya—discussed in the interview. She discussed both race and the treatment of refugees in the article, according to ABC Adelaide.

The incident, once again, highlights racial biases amongst white people, who often see black people as homogenous, despite obvious dissimilarities in appearance. For black people and other people of color, this is a common occurrence in workplaces and classrooms, something which Akech echoed in her statement.

"Whoever did this clearly thought that was me in that picture and that's not OK," she wrote. "By this happening I feel like it defeated the purpose of what I stand for and spoke about. It goes to show that people are very ignorant and narrow-minded that they think every black girl or African people looks the same. I'm sure that I'm not the first person that's experienced this and it needs to stop."