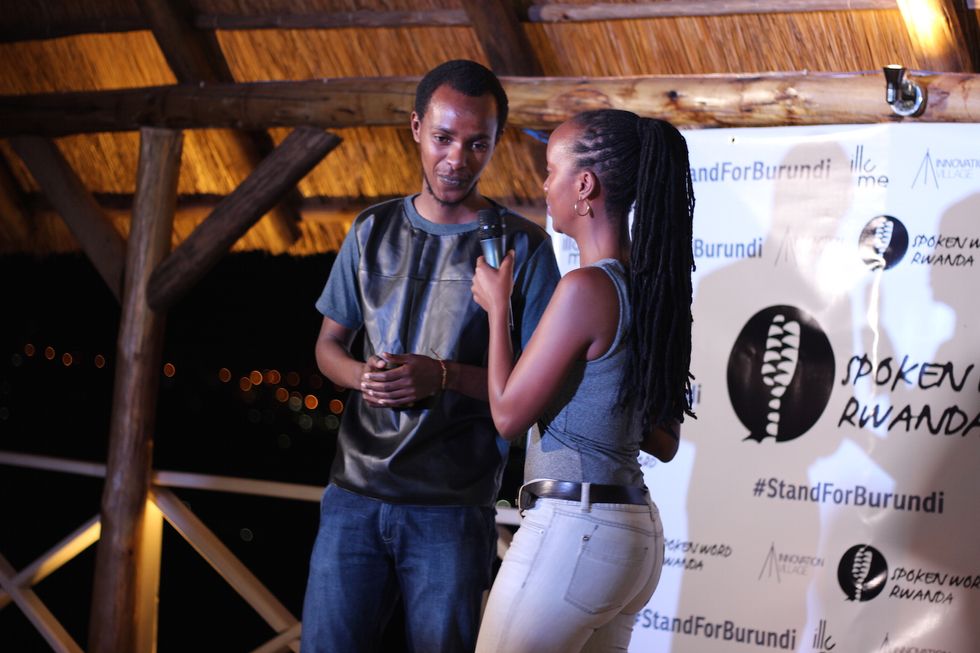 In Kigali, Rwandan artists and poets gather for cultural healing in solidarity with Burundian refugees.

Photo taken by the author at Spoken Word Rwanda's #StandForBurundi event in Kigali.

A visit to Kigali’s National Genocide Memorial draws an eerie resemblance to modern day Burundi. From the coded hate speech of public officials, to politically charged cartoons, to the photos of bodies in the street—the terrifying reality is Kigali 20 years ago looks like Bujumbura today.

On the evening of December 30th, Spoken Word Rwanda held their monthly show at Pili-Pili Lounge in Kibagabaga with #StandForBurundi as the theme. Proceeds from the event were donated to the Mahama refugee camp in Eastern Rwanda where thousands of Burundian refugees have relocated to since violence engulfed the country last spring.

“Think about all the people, whether it’s your family, relatives, friends, and people you don’t even know and what it must feel like for people in Burundi right now,” said Diana Mpyisi, founder of Spoken Word Rwanda and co-MC of the event as she opened up the night.

Rwandans share more than a history of colonization, enforced ethnic divisions, distrust and violence. They also share similar food, dance, language, resilience, and consequently empathy. An empathy it seems the international community finds itself incapable of in order to save lives.

Under the thatched roof of Pili-Pili lounge, poets, singers, painters, Rwandans, Burundians, Africans, family, friends, natives and refugees practice healing through the arts. The lounge is a sister establishment to the well-known Bora Bora lounge on Lac Tanganyika in Bujumbura. The obvious choice of this venue for the monthly event was to provide a home away from home for those close to the conflict. On the second floor’s seating area, guests were treated to the sight of Kigali’s twinkling city lights.

“I have a dream that we will soon celebrate Burundi’s recovery and resilience. Look there, the beautiful lights, 20 years ago, they were filled with blood,” offered Samantha Teta, a first-time performer. Teta’s words of hope especially resonated with those, like me—those of the Burundian diaspora.

My family has yearned for two decades to return to our country where our home, neighborhood, family, friends, and memories wait for us to return. For a long time, it was never a question of if we would return but when it would be safe to. No place in the world could replace our beautiful, tiny country, even if it went through cyclic waves of violence.

“I didn’t plan on doing this but he talked about hell and fire is one of my biggest fears so, here I am. I have to speak,” said Teta as she stood before the crowd in a vibrant red African print shirt, tightly buttoned at the collar. Though her voice quaked, she continued to speak.

Photo taken by the author at Spoken Word Rwanda's #StandForBurundi event in Kigali.

In a confidential memo written by the UN’s Department of Peacekeeping Operations (DPKO) outlining the scenarios in Burundi and possible UN responses, the DPKO worryingly cautioned that all the peacekeeping possibilities it presented to the Security Council "offer limited scope" to prevent atrocities because of logistical complications. In any scenario, "these options also highlight strategic gaps that the United Nations in unsuited to fill," said the document, adding that despite being charged with civilian protection, the UN would be unprepared to handle a genocide-type environment.

The international community’s unwillingness to properly plan and respond is a sign we’ve all seen before. In this lounge, I hold no hope of rescue for my small country. As systemic rapes, arbitrary arrests of hundreds of young men, and training camps in remote areas of the country continue to grow, the inevitable seems to approach.

My mother told me to pray for peace to break the awkward silences that inevitably fill any conversation about the safety of those back home. Prayer has always worked miracles for my mother but I cannot help but grimace at the notion. Imagine using the tool of the church implicit in the colonization and enforcement of the ethnic tensions that lie at the root of the cyclical violence that we’ve all endured. It’s a strange cycle, but it’s the only comfort we can afford.

Performances at Spoken Word Rwanda continued to vary. Without a single utterance, Willy Karekezi, a local Rwandese painter, stepped on stage with a blank canvas, an assistant, and several bottles of paint. The DJ played KRS-One’s “Step into a World” and Willy got to work. By the end of the song, Willy had completed a full 3x2 foot painting of an intore dancer/warrior.

The inadequate responses from the international community leave a terribly vacant spot for a Burundian-led rebellion to put an end to the conflict, similar to the Rwandan Patriotic Front that put an end to the 1994 genocide. Reports of rebel forces being formed in Rwandan refugee camps aided by the Rwandan government have been adamantly denied by PresidentKagame.

“I think Rwanda is similar to Burundi, so I decided to use this. What’s happening in Burundi is not good, it is like the end of the world,” said Karekezi. Karekezi explained that intores were originally warriors in pre-colonial Rwanda, before they became dancers for the king in times of peace.

Both Kagame and Nkurunziza were the first to lead their countries after both countries were broken by violence. Nkurunziza led Burundi to a decade of relative peace after the signing of the Arusha Accord in 2005 ending a ten-year civil war, as Kagame led the RPF into Rwanda to end the genocide.

Both leaders have sought third-terms this past year, but through very different avenues. Rwanda offered a referendum voting option to citizens to allow an amendment to the constitution to enable the president to run for a third-term. Burundi saw mass protest and backlash to Nkurunziza’s announced run for a third-term. Kagame answered the answers of his country, while Nkurunziza, ignored the requests of his people to answer the call of his political party. The stark difference in leadership styles of the two presidents have ultimately both been met with the disapproval of the U.S. despite the stark differences in the democratic and dictatorial approaches.

Many of the performers, as well as the crowd, were young professionals and students, the typical crowd for any spoken-word venue. The special dedication of the event to the people of Burundi brought out an even more eclectic group, as many self-identified Burundians of all ages proudly presented themselves by hand when asked by the MC. One couldn’t help but to think that this is also the prime demographic targeted by police forces and the Imbonerakure militia in their reign of terror these past months.

Seeing faces that are familiar and knowing they see themselves or their loved ones in my features is to feel at home. To hear my mother’s tongue spoken by friends, strangers, taxi drivers, someone other than my mother, gives my body a sweet rush only known to those displaced. Something about hearing my name being pronounced properly warms me, wonderfully.

Before the final performance, the organizers gathered the crowd for a small vigil and moment of silence for all of the lives lost in Burundi. As candles were distributed throughout the crowd, a voice asked, “Can everyone stand up? Find a moment in your heart to say a short prayer for them, and let’s just remember that we are here in solidarity. Small gestures like this can go a long way.”