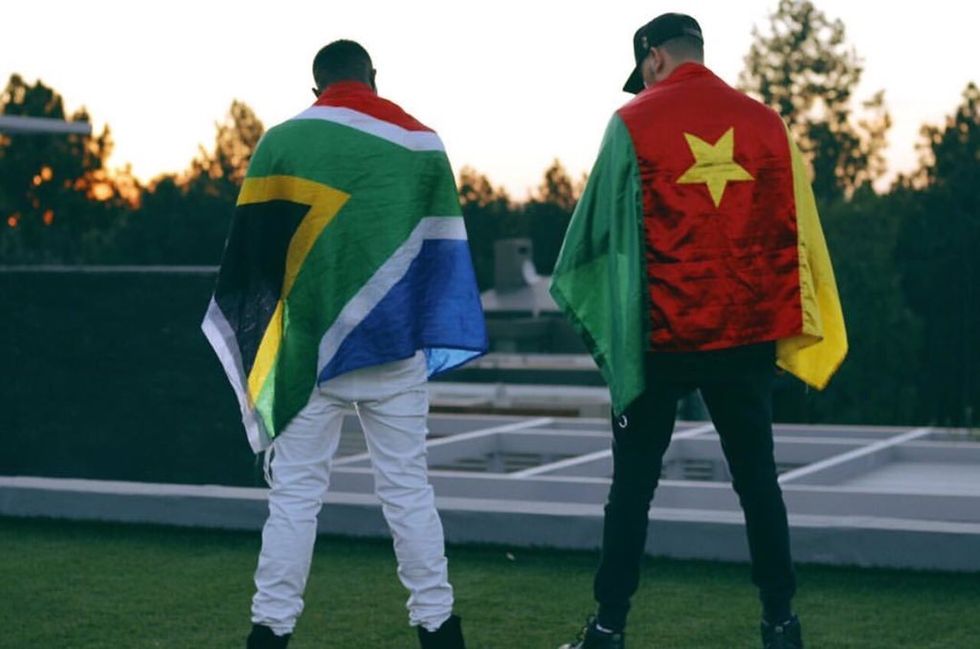 Stanley Enow (left) and AKA (right). Courtesy of Motherland Empire

After putting out the first rap collabo between a Cameroonian and Moroccan artist, Stanley Enow continues to make African hip-hop history this week. The Cameroonian rapper’s new single with AKA marks the first hip-hop collaboration between the two nations.

Enow tells us he first met AKA back during the 2014 MTV Africa Music Awards in Durban. Enow, who beat out Burna Boy, Phyno and Uhuru to take home Best New Act, mentioned to AKA that he’d love to work with him sometime.

Nearly two years later the conversation has resulted in an AKA-assisted remix to “Bounce.” Yaoundé-based singer Locko also features on the track.

Working with AKA was a lot of fun, says Enow. “He always delivers and he so did on his verse on ‘Bounce.’”

For Enow, collaborating across the continent is important. “It helps to bring (and keep) Africa together as one” the rapper tells Okayafrica over email. “To be played and heard in other places on the continent one needs to cross collaborate.”

Enow of course is no stranger to pan-African collabs. In 2014 he enlisted Ghanaian superstar Sarkodie to jump on a remix of “Njama Njama.” The West African collab resulted in one of the biggest chunes of the year. Earlier this year Enow teamed up with Ice Prince on “Yours” and with Morocco’s H-Name on “We Live Together (Nga Yan).”

Now Enow has his sights on the southern tip of the continent. It’s a historic moment for the Cameroonian and South African urban music industries, the rapper says. “Both our countries are great football nations and it was high time we come together through music too.”

Watch the Johannesburg visuals for “Bounce” below. Listen closely for AKA’s Fela shoutout: “Fela said music is the weapon.”