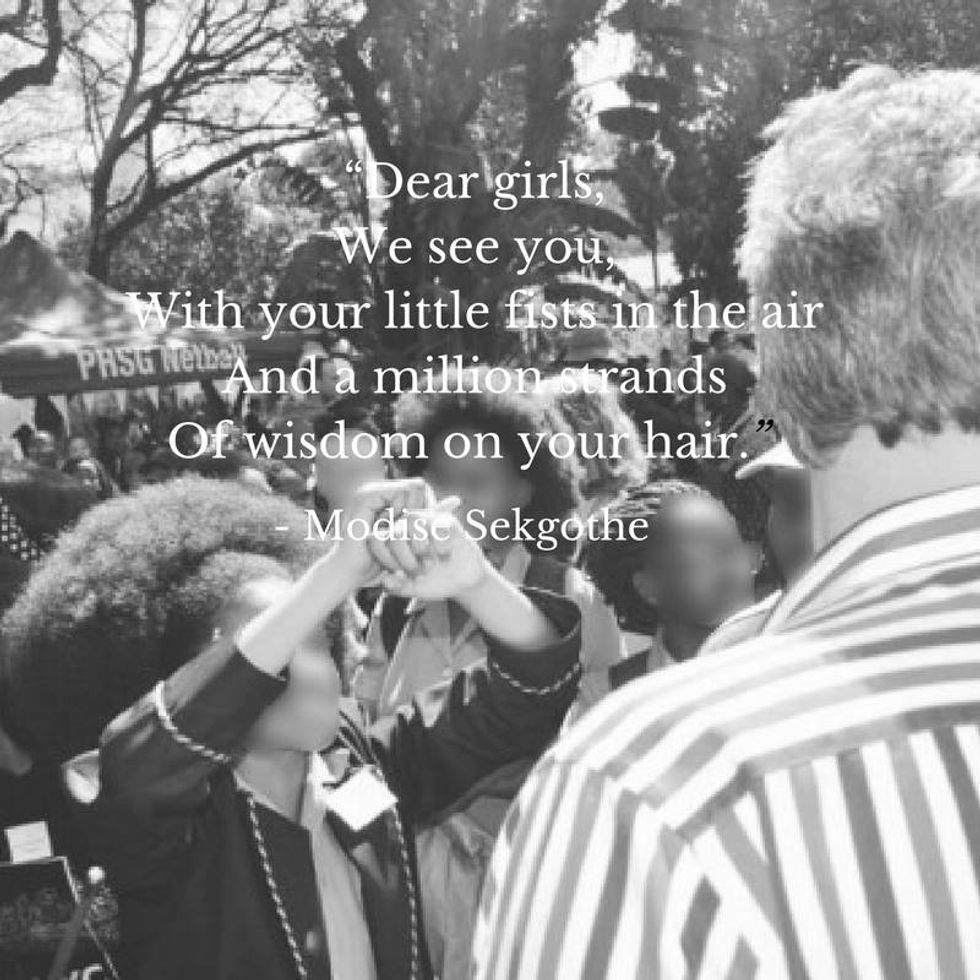 The biggest story out of South Africa today––and perhaps the definitive #BlackGirlMagic moment of 2016––is that young black women are demonstrating against institutional racism at Pretoria High School for Girls, a Model-C school in the nation’s administrative capital. At the heart of the matter is white people’s policing of natural hair.

The protest action began on Saturday at the school’s annual Spring Fair, where a group of students organised a silent march around the school to protest against rules and regulations on the hair of black students. The march was the culmination of a series of incidents involving black girls’ hair and allegedly racist and inappropriate comments by teachers, reports The Daily Vox. During a civvies day last week (a day in which students are permitted to wear casual clothes), a group of students dressed in all black and doeks were surrounded by school guards at an outdoor assembly. Their clothing was regarded as “politically motivated.”

Saturday’s peaceful march, consisting largely of grade eight students, had a heavy police presence. It came to an abrupt end when teachers and volunteering parents threatened to call the police to have the young girls arrested.

Videos and photos from the protest made their way to social media. A hashtag, #StopRacismAtPretoriaGirlsHigh, began to trend.

In the face of arrest and heavily armed police, the schoolgirls continued to fight and carry on the protest today.

Inspired by these brave young women, South African poet, playwright and performer Modise Sekgothe penned a poem for the black students of Pretoria Girls High. Here it is below, re-published in full with permission from Sekgothe.

With your little fists in the air

And a million strands

Of wisdom on your hair.

We heard of all the hate

They hurled at you,

And how you held your own,

With tooth and claw and afro-comb.

You stood your shaky ground,

Even before you could walk.

You wore your crown,

And sang for its sacredness

Even before you could to talk.

You turned them to stone,

And how your locks

Have mocked their bones.

We saw your gaze

For we have grown

To turn a blind eye

To the rainbow nation

Of where colour burns lives

And only the darker shade dies.

But in you resurrects sinews

And so they bring you

To stand for truth.

Strand by strand of ancient beauty

For in you resides their roots.

But the tree grew to frighten brutes

Who would kill you to straighten views,

That turn you against yourself

And pin you against your skin

Then skin you and your kin

To spin you into confusion.

They have taken your tongues,

Your crowns are all you have left.

They come while you’re still young

And replace your crowns with thorns

And tongs and throngs of self hatred.

But I can see it in your eyes,

You will write the story different.

We have awaited your fiery kind,

For the prophesies spoke of Indigo child,

Who would release black light beams

From inside her mind.

For inside is a mine

And the gold lies in your tongue.

From where insight will arrive

When you speak out against the times.

For in time you will find

That they were trying to sever your ties

You are desert fresh air,

And drown them in their hatred,

And move along to redefine your history sacred.

Who knew that a little girl would take back

Black from centuries of an identity tainted?