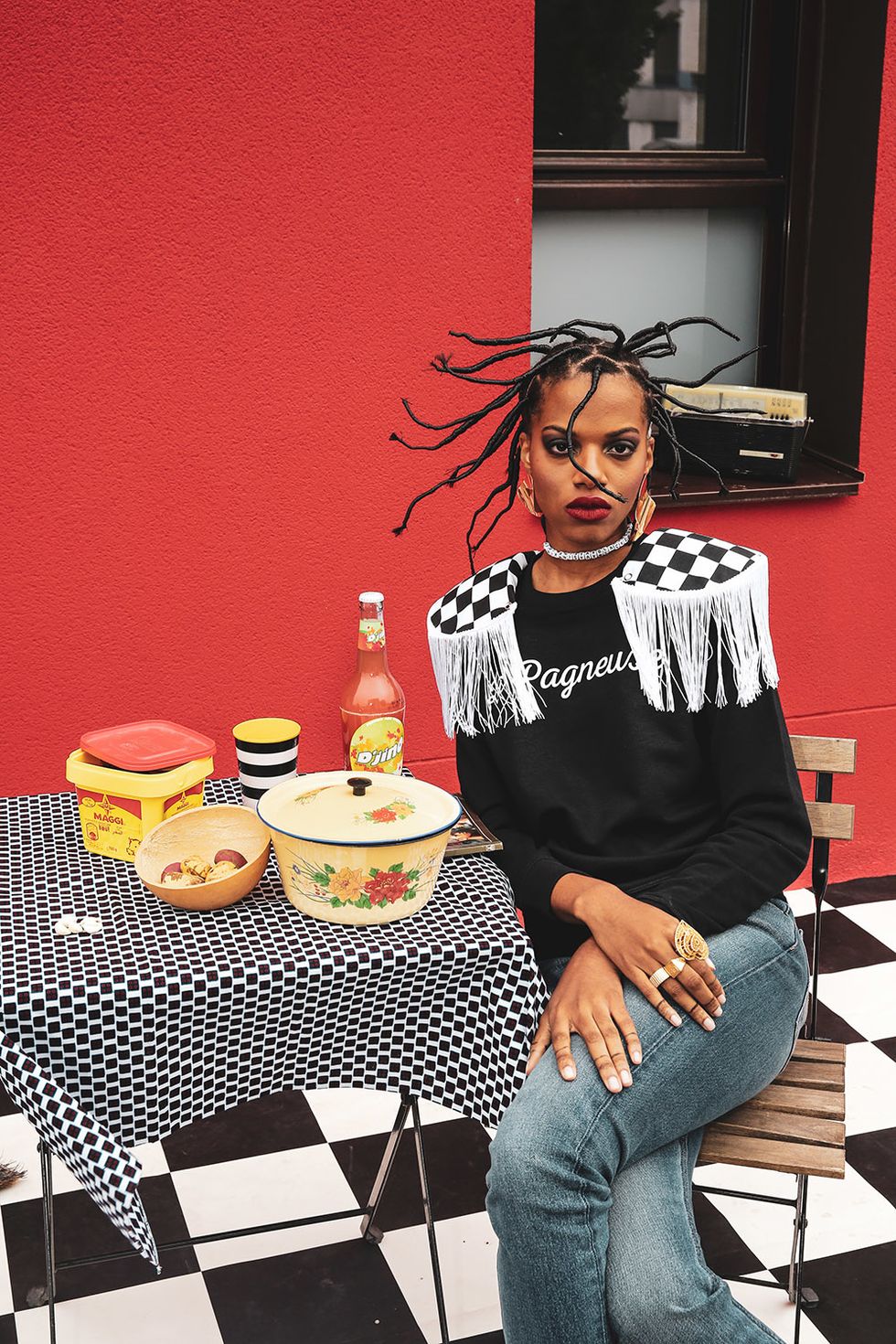 We catch up with Cameroon's own Marina Wilson of Black Square to learn more about her collaboration with Beyoncé-approved fashion brand Afrikanista.

During Beyoncé's time in South Africa after performing at the Global Citizen Festival, she celebrated the artistic diversity of the continent by wearing clothes solely from African brands.

In one of her ensembles, she donned a T-shirt from Afrikanista's previous collection. Her stylist Zerina Akers discovered the fashion brand—created by Aissé Ndiaye in 2014—on Instagram and loved it. The brand recently launched a new collection, Bal Poussière X Afrikanista, a collaboration with Marina Wilson, a Cameroon-born, multi-disciplinary artist and now fashion designer who's the mind behind Black Square—a platform promoting black creativity.

We spoke to her about her collection with Afrikanista, her transition into the fashion world and more.

Aude Konan for OkayAfrica: Can you tell us more about the film Bal Poussière, and why was it such an inspiration for you?

Marina Wilson: My African heritage impacted the way I approached the project because I grew up in Cameroon. I didn't have the chance to watch films with characters who look like my family members or whose background and setting looked like the city I was living in. With Aissé, who created the brand Afrikanista, it was really important for us to show how rich African culture is, especially in terms of fashion and cinema.

Bal Poussière is a film directed by French director Henri Duparc and was released in 1989. Shot in Ivory Coast, it shows the daily life of a polygamous family like many others that you can find in the motherland. The film inspired us because it portrayed characters that are rarely seen on screen, mainly housewives who showed their personalities through their nicknames and attire, mainly the "ankara-addicted women" who believe in traditional values and the "dress-addicted women" who are modern.

How did you meet Aissé Ndiaye, and how did the collaboration go for you both?

Aissé Ndiaye and I have known each other for 4 years now. We're both part of the Parisian black arts scene. Since we were always bumping into one another at the same events, with her as a designer and I as either as a DJ or working for my media company Black Square, we got to know each other. I suggested that we should work together on this project and this is the result you're seeing now.

Were you involved in the technicalities of creating a fashion brand?

Creating a clothing line is a totally new experience from me. I've always loved fashion—especially streetwear. For 3 years, I've organized a streetwear trade show but it's the first time I am on the other side, as a creator behind the scenes and I find it incredibly inspiring.

What do you want to achieve with the new collections?

African fashion is becoming trendy again and there are a handful of new designers now. What do you think of it and how do you want your brand to stand out?

I believe that it is a great thing that so many creatives are inspired by African fashion. The more they are, the better it is. With our line, what makes it so unique is that we want to expand it beyond just the Francophone black scene. We want to do that by showing how various art forms—literature, fashion, and various ideas—can create a world just as inspiring as what English-speaking Africans have done until then.

We have planned to add more clothes to the line, mainly shirts and denim items.

What advice would you give to aspiring fashion designers?

Be patient in the way you approach your creative process; get a broader knowledge base because you can find inspiration anywhere and try to look for the concept of frugal innovation. You'd be surprised by all the amazing things one can do with very little means.

You're a jack of all trades, what are your next projects?

With my Black Square team, we are working on creating new visual content and events around black creativities. As a solo artist, I'm currently working on a few musical projects that should be dropping in 2019.