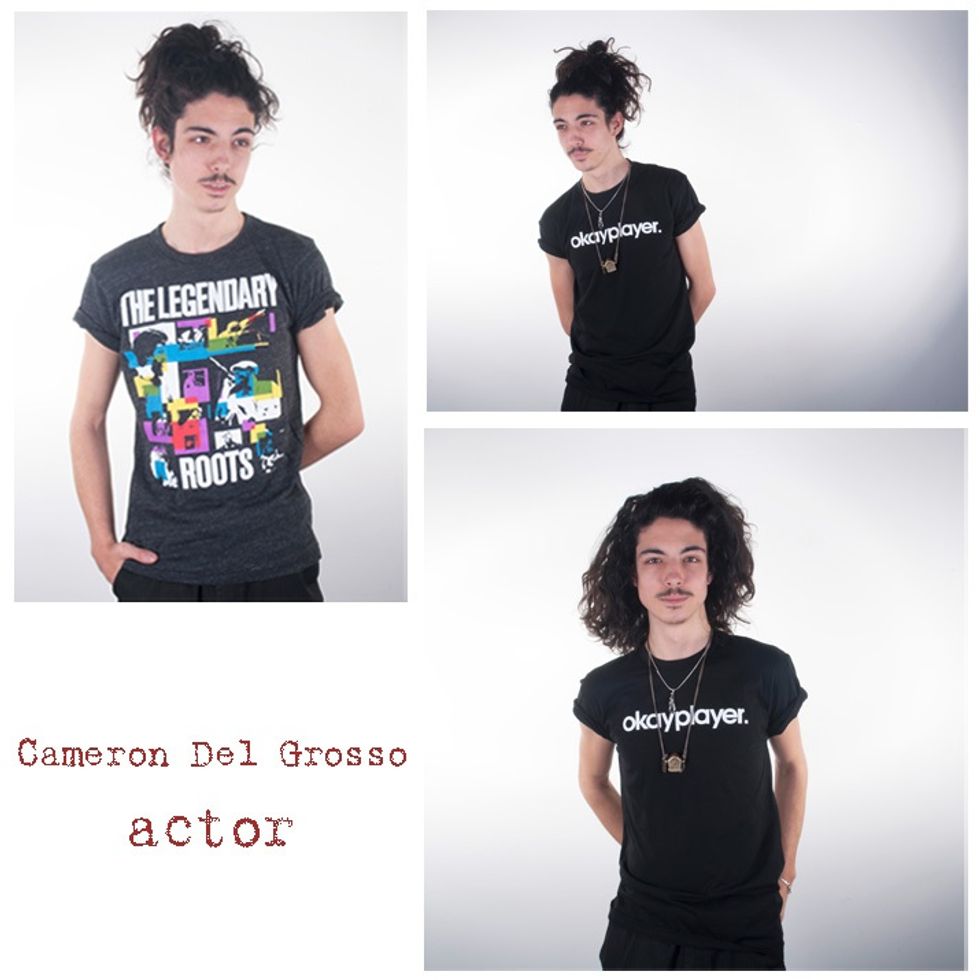 It is about Actor Cameron Del Grosso sporting Okayplayer Tee-shirts and talking about style.

We spotted Cameron Del Grosso while we were looking for an Asian model with long hair and tattoos. He was hanging out in Bedstuy and the second we saw him, we knew we needed to have him on board to sport one of our great OKP Logo and Legendary Rockers Tee. He 's got style despite his natural attitude "I just woke up like this, put this on me and I don't care what you think, whatever."

Okayafrica: You got style. How would you describe it in 3 words or less?

OKA: Do you have a style icon?

C: To be honest, no, not consciously. Though, I'm constantly told my style, my look is reminiscent of Johnny Depp, which I guess I can't help but see every now and again while styling myself or being styled. Other than that, I just like to play with different styles, and different ways that I can make myself look. The actor in me informs the model, I suppose.

OKA: Tell us a story from your childhood. Is there one story that your parents or siblings tell that encapsulates what you were like as a kid?

C: As a kid I used to love the woods. My friend and I would always be running thru the woods finding cool stuff and exploring. One day when my friend was on vacation I went on my own to explore one particular patch of woods behind a certain grumpy neighbors yard. After discreetly navigating around the yard and dashing wildly into the wood for a certain time, I slowed down to find myself face-to-face with a copper head snake, the only lethally poisonous snake in Maryland, about four feet in front of me. We both stayed perfectly still for what seemed like ten minutes (in reality probably no more than a minute) just regarding one another. I never had the feeling I was in danger so much as that feeling of being in the presence of something both incredibly strange and familiar all at once. He sat and watched me with the same wariness and curiosity that I gave him... After that extended moment, I simply turned around and walked back home. I assume he did the same... minus the walking.

C: That would have to be these really dope orange vintage pants a friend gave me earlier this year. They're these slim fitting, moth-eaten costume pants from the 70's and they're fly as hell!

OKA: What’s your favorite item of clothing to remove from a female fan?

C: Y'know, I find the little things really enticing. Like a hair tie just to let it fall freely, or a pair of sunglasses to get a solid look into her eyes, or just unbuttoning the first two buttons of a shirt to let her continue the rest.... I guess the motion starters are my favorites.

OKA: If you had your own cologne – let’s just say you bottled your body odor – what would you name it?

OKA: What are you working on right now – what’s exciting?

C: A lot! So, right now I'm working on a production of Hamlet with a theatre company called Theatre of WAR. We're performing May 9th-19th at the 133rd Street Arts Center. I'm actually playing Hamlet so right now I'm getting extremely busy between rehearsals, promotional efforts and randomly awesome stuff like learning how to fight with rapiers and sabers. It's just plain old FUN!