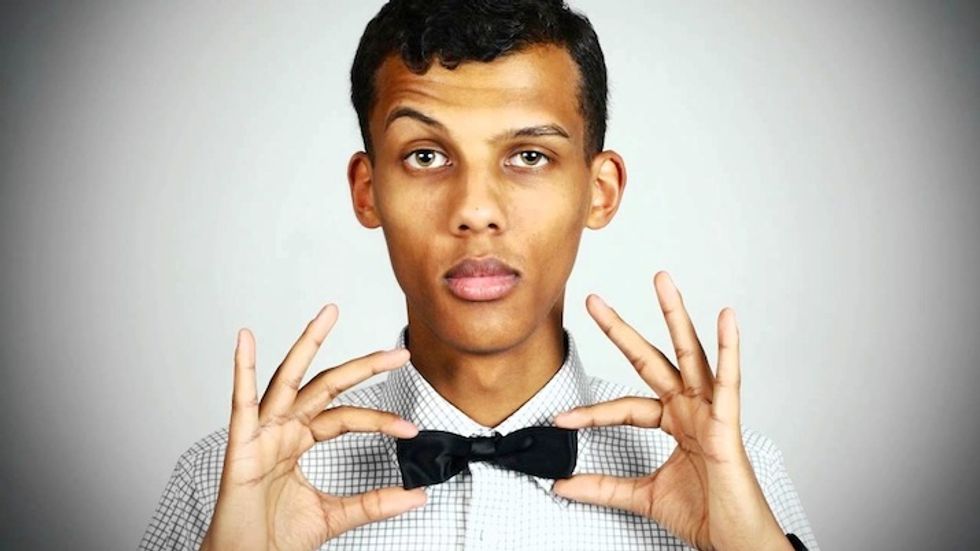 As he showed in his past music videos, Belgian/Rwandan singer-songwriter Stromae (an inversion of Maestro) has a clear visual sense. Having already shared the strangely beguiling video for his song "Papaoutai" and the dryly hilarious one for his soccer anthem "Ta Fete," the former film student now drops a different yet still engaging video for the song "Ave Cesaria" from his Racine Carrée LP.

Unlike the Wes Anderson-like precision of Stromae's previous videos, "Ave Cesaria" is shot in a very loose, almost jumpy style that perfecly matches the Beirut-esque jubilee of the song. Taking place in a rather bare yet comfortable banquet hall, the video features Stromae performing the song live with a full band in front of a jovial crowd of dancing men and women, one bright-eyed older man singing along in his chair, another man just sitting at a table and watching.

Like Tony Allen's recent "Go Back" video, Stromae's latest cinematic experiment is, really, a portrait of both joy and melancholy. Interestingly, though, the video also manages to be about one person– Cesaria Evora, the late Cape Verdean singer who, as she was called throughout her career, Stromae describes as "the Barefoot Diva." Mentioning Evora's habits of drinking and smoking while expressing deep respect for her, Stromae further shows himself as a beautifully sensitive lyricist and storyteller with "Ave Cesaria." He never judges Cesaria but doesn't overly praise her, either. In the end, like the excited, child-like nature of the video's camera, Stromae just observes, trying to have fun in the process.

Watch the video for "Ave Cesaria" below.