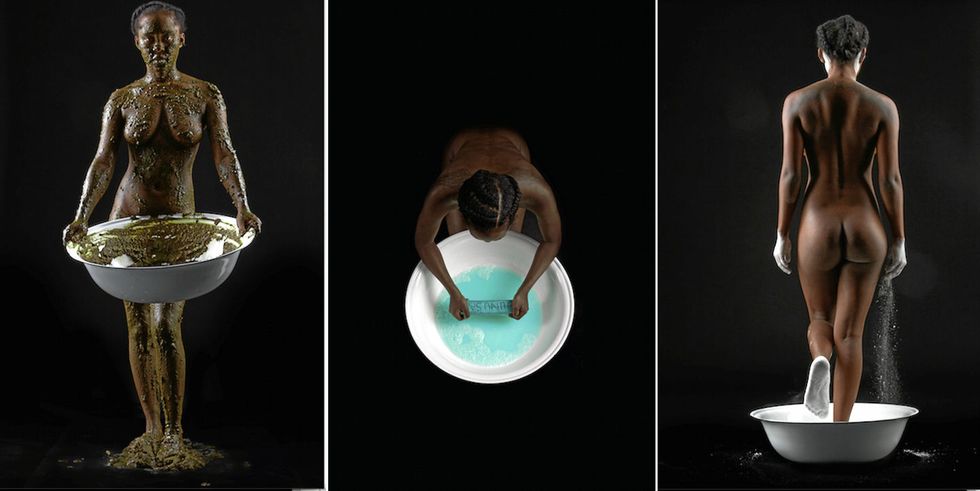 Whether it's here or in another realm, you need to meet Buhlebezwe Siwani, a South African Sangoma and artist expressing double consciousness through the mediums of performance and visual art.

In South Africa, those who practice traditional medicine and divine healing are known as iSangoma. Siwani’s latest solo exhibition, Ingxowa Yegqwirhakazi, is an exploration of African Spirituality, Christianity and the black female body through performance art, video and installation.

The idea of double consciousness as it comes across in Siwani’s work has to do with channelling her ancestors as she uncovers the duality of revealing and concealing. Working with a green soap that is a staple in many homes on the continent, Siwani conjures feelings of nostalgia while using her body in performance to look at ideas of purity and cleansing.

This exploration of Siwani’s infinite selves—manifested as Ingxowa Yegqwirhakazi—began at Michaelis School of Fine Arts, where she recently completed her MFA as the youngest student at that point in time and the only black student.

Ingxowa Yegqwirhakazi features a video installation of Siwani’s performance Ngenzelephantsi which sees the artist plucking chicken feathers off her body. Consider for a moment that chickens are used in some traditional cleansing ceremonies during funerals; Siwani as iSangoma, who cannot attend funerals, turns to Siwani as an artist, to cleanse a body which is multidimensional.

We visited Siwani in her workspace at Cape Town’s Greatmore Studios, a windowless space filled with the scent of the same green soap that forms a component of Ingxowa Yegqwirhakazi.

So we’re here to speak about your new body of work, Ingxowa Yegqwirhakazi. What does the title translate to in English?

The witch’s baggage or luggage. Because certain words in isiXhosa have double meanings, so as you translate them, it, I think, is your choice as the artist which translation to use.

Ingxowa Yegqwirhakazi is basically about the many ways in which I was cleansed and washed and how I feel about how I’ve grown up and my memories surrounding that, regarding Christianity, colonization, being a black female body, history, culture, all of those things, and the violence around the black female body in these spaces.

You mentioned double meaning, and I find it very curious that you are both an artist and a Sangoma. Something that I picked up in your work, especially in the video of you plucking yourself as a chicken, is that you use your body as both artist and Sangoma to do things that you may not be allowed to do in one realm and enact them in this physical realm.

I think there’s so much more to kind of uncover and to write about and to make work about concerning revealing and concealing. Because the thing is with secrets is that we all know the secret actually. Nothing is really hidden. we all know how these things work, it’s just the language we develop in understanding them. Some people understand them better than others because they’ve been a part of the rights of passage, the rituals, that have to do with this particular, secret.

It's interesting that the gallery where your work is, WHATIFTHEWORLD, used to be a synagogue. So you your work is touching on African spirituality, Christianity, and then you have Judaism being the space that is holding this conversation.

I actually like that idea of taking over. We have so much work to do as a people and everybody else needs to understand that we needed to have started here. So taking over that space totally means a different thing for me. And I think it needs to be understood in that sense. Because if we are not to take over in our own spaces and we allow everybody to take over our own space, that means that, okay everything is still free for the taking, Black people are still not free in those spaces.

Let us talk about performance art as a practice of self-love through the confrontation of fear. The images of you going into water, into the ocean. Even that again is you transgressing your limitations as a Sangoma, but then performing as an artist and conquering that fear that you have for yourself.

My fear is very very very directly linked to being iSangoma. There are different kind of spirits that we have as iSangoma. It might happen to be mainly water spirits. And ever since I was a child, water seemed to like me more than I liked it.

For me going into water is journey of just, I have to conquer, I have to do this. And there are rituals that take place in the sea. But you know as an artist, I had to find a language to translate that fear and to substantiate, to kind of show how big and endless this body of water is.

So it is a practice of not self love, but, because I love my ancestors because they are the reason I am here, I am their vessel, I am not a lone human being. I work with them. So everything I create I create with them in mind and I create it with them, and in that sense it becomes Our art piece.

Another thing I’d like to speak to you about is the soap. That was the first thing that struck me when I walked into the space it was just the smell…because it was filling up everything. So I like the way that you’re playing with sensory awareness in the space.

I started with the performance, Qunusa! Buhle, which grew into a photographic series.

The whole thing came from a memory that I have of being washed by my aunt at my grandmother’s house. And I was washed in the kitchen that day, like many days, but the difference is that there was just a lot of people. And that particular today, my aunt said qunusa! Which means bend over, you know, because she wants to wash your cooch. And I was just, first of all, I’m about ten years old, I can wash myself, but you’ve chosen to take me from the streets playing with the boys, and you’ve decided that it’s time for me to wash and to look like a girl now.

I kept on thinking about that, it became this idea of purity and how we cleanse in order to be spiritually sound, and also just desirable. I just wanted to grapple with the idea.

At that point in time when I was just beginning the material, I had my memory understanding of it and then I wanted to understand the material now. Because this green soap used to be brought home and it would be cut up in pieces. And it would be used for washing dishes, washing clothing, washing you. It would be cleaning the house. There were all sorts of purposes for this long bar of soap.

And it’s so wild that this is not the way Africans would clean themselves before.

And now, it’s extended into every aspect of our domestic space, and it’s actually poisonous chemicals.

So yeah, I also was looking at other ways of washing in African spirituality and how they cleanse and how they believe bodies are clean.

Because cow dung, which is also used on the floor, it’s a thing that cleanses the spirit in African spirituality.

And then holy ash is also used widely in African churches, but Zion, ZCC, so it’s African led churches. Churches that would use drums and all this kind of stuff. Not necessarily using the bible but parts of it. But it’s still think that those a very patriarchal, they can be very patriarchal, and the ideas are very patriarchal which is also problematic, which is what we need to deal with- the church is patriarchal, the whole bible is patriarchal. So these are the things that we have to contend with. But also ubungoma, has elements of patriarchy of because of culture. But it really isn’t patriarchal. It’s crazy. It’s just that people like turning things into what will suit them and what will suit their agenda. So we always constantly have to be careful about who purifies us and in which way.

I always like to think of my body as a costume. Not as a, you know, naked body. You know we always as artists, I you’re going to go out in the world and put a nude there, or a video where you are not clothed, it is totally something that is in here, for you you need to go into that space with the idea that my body does not only belong to me, it belongs to every single African woman.

I read somewhere in cyberspace that you grew up in different places around South Africa. Johannesburg, you are based in Cape Town, then there’s KZN...

And the Eastern Cape

So how would you say then that your nomadic experience of your identity as a South African plays into Ingxowa Yegqwirhakazi?

Wow, that’s something I’ve never been asked. It’s taught that we are really the same people and we exist in the same way. Yeah. But it’s also taught me something interesting about art being a marker of the times. And how people take back what’s theirs. I learned something interesting about how tribalist we can be. Because I can speak all of these languages and I can speak them mostly properly…

What languages can you speak?

And of course English and Afrikaans, which I just refuse to engage with actually anymore. And then what’s that other one? There’s another one, I probably just can’t think of it now. Oh! But my best friend is also Tsonga, and it’s also very close to Shangan. We really are very very close to each other. But going to all these places had me wanting to learn about my history and my people, my clans and all these things, even more. Yeah. So I guess that’s something that influences my work. These bowls are a memory for everybody. Washing is a memory for everybody. But it’s how you translate bodies of work that matter and how you execute the work. So moving around has taught me how people relate differently to certain things and how similarly we relate to the same thing.