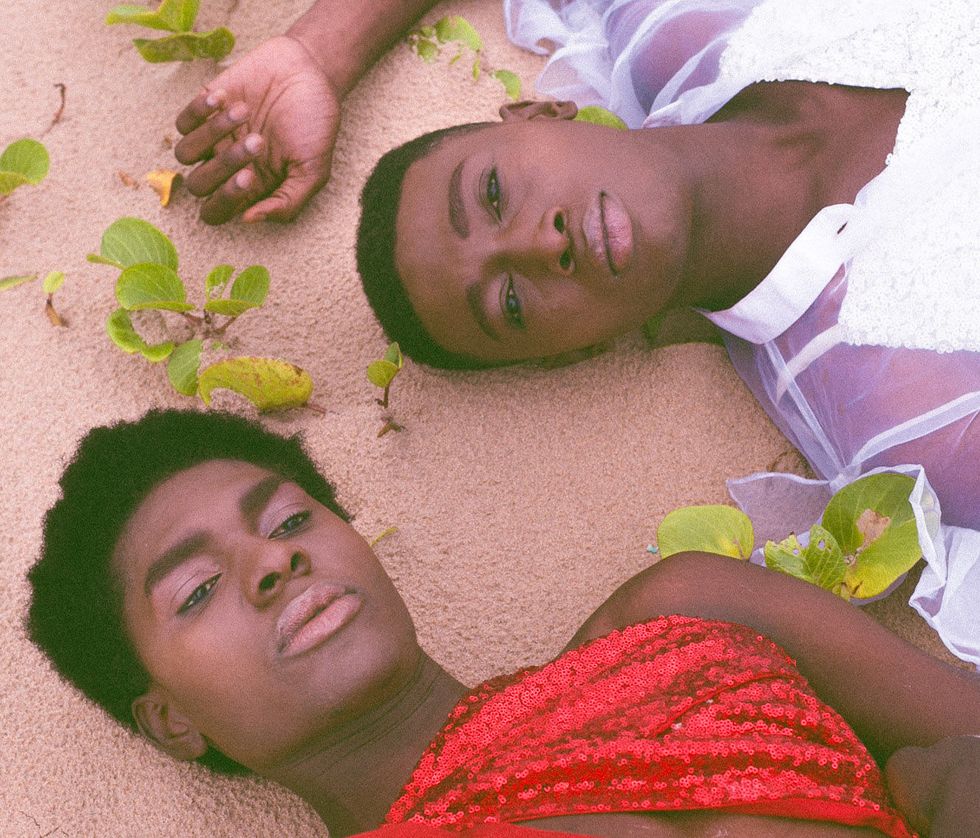 We speak with the creator of 'A Nasty Boy' magazine, the publication widening definitions of masculinity in Nigeria.

Actively challenging social expectations around gender and sexuality is a groundbreaking act in and of itself. Creating an outlet solely dedicated to this mission—in a place like Nigeria—is radical.

Nigeria's conservatism and wide-spread sexual intolerance is well documented. It's a country where 'homosexuality' is more than just "frowned upon"—it's punishable by jail. None of this has prevented Lagos-based journalist and publisher, Richard Akuson, who we first connected with back in 2014 upon the release of his lookbook "My Dark Twisted Fantasy," from creating A Nasty Boy, a high-fashion magazine vehemently pushing for inclusion in Nigeria. The negative attitudes that exist around sexuality and gender identity have only propelled the journalist, turned PR agent, turned publisher to move further into his passion of telling diverse stories.

We spoke to the Akuson about the creation of A Nasty Boy magazine. He tells us that though he's faced some opposition, he's also gained supporters in his mission to broaden representation in his home country.

Damola Durosomo for OkayAfrica: What prompted you to start A Nasty Boy magazine?

Richard Akuson: It was a culmination of several things. First, my personal experience growing up, and that of people that I know, my friends. The amount of bigotry that I noticed in Nigerian media. I would look at certain publications and the comments section would be so hateful. These many things came together to push me towards this.

How did you come up with the name A Nasty Boy?

To be honest, there was no epiphany. I really just wanted a name that would stick. I wanted a name that would linger, one that would be disarming. Besides having the courage to start the publication finding the right name was the second hardest thing, because I kept coming up with so many different names, but I would check 'name feed' and it would say 'this name is already taken.' So it took a lot of time, but once I came up with it, I ran it by a few of my friends and I just waited to see how they would react to it. A lot of them were puzzled for a second, like 'what is that?' It was that thing that I could see come over them that I found most interesting, and I just had the gut feeling that it had to be that.

What made you take the leap from being a journalist to creating your very own outlet?

There were so many times when I would pitch stories, and you know, Nigeria is a very conservative country—pretentious as well—so a lot of topics were off the table and considered taboo. I always thought that fashion could do more than look beautiful and elegant, I always felt like we could actually question society. We could push for more.

Thankfully I was with a publication that allowed me this free range, and so I could work a lot, but what I realized was that in the comments section you would see a lot of people calling out the publisher like "how dare you allow Richard to push a 'gay agenda'" and stuff like that. Each time I tell this story, I always think about a story that I wrote about EJ Johnson, and how I thought that his wardrobe could inspire a lot of our reader's wardrobe. In the story I applauded his style, and the readers weren't having it. There were a lot of comments like "oh no he's pushing a gay agenda full on."

There was another time where I did an experiment and wore hot pants, and besides the fact that I got lots of stares and [rude] remarks, when I decided to snap a few pictures and talk about that experience on the publication, again, the comments section was something else. So I left and decided to go into PR because at that point I was like, you know what, I really can't joyfully express what I feel without being called out.

So I got into PR and did a bit of PR for fashion, I started a blog as well, and I found myself going back to the same types of stories. I did one where I had makeup on my face. I kept going back to these same things.

Photo by Wavy The Creator.

I know the publication has gotten a lot of attention from Western media, but what's the response been like on the ground in Nigeria?

The international press started coming in June, with Hunger Magazine and then CNN. Thankfully, we've gotten a lot of press features. It's been tremendous. I was reading an interview, that Bryanboy did with Fashionista.com where he said: "There's always this weird feeling at the back of the head like how long are we going to last, how long are we going to be in this? Are we going to be part of the history books, did we actually make a change or a difference in the industry? It feels like we're scamming people and the sham is going to end tomorrow."

I always just felt like, "Oh this is just going to be for a bit of time," after a month everyone is going to get tired and then they'll get back to business as usual. But it's amazing that enterprise keeps coming, and it's beautiful having our story told to a global audience—you know you can never have enough of that.

But that being said, when we started out, a lot of Nigerian publications were bashing us. A lot of people didn't understand what it was for. Even when I tried approaching a few investors they were like, "How necessary is this? This is not fully necessary, can't you do a regular publication like any other person? Yes it can be high fashion but it doesn't have to push for any sort of agenda." That sort of thing. I always responded that A Nasty Boy isn't pushing any particular agenda, we're about inclusion and diversity, and that's a very wide spectrum that includes so many things—so many aspects of the human existence. We're just saying that exclusionary narratives and singular narratives are not the way forward. We should broaden our minds and allow ourselves to understand other people's stories, and appreciate that. But once we started getting the press, people started warming up. Particularly there was a publication that did a story on us, and it wasn't the most pleasant story, but after the CNN story, they literally did another full piece where it was all praises and stuff, and I just could not understand why the sudden change in their point of view.

But now, things have changed, we have a growing community and A Nasty Boy has expanded. Initially, I always imagined that our readers were going to be only Nigerians, I didn't think that we'd have readers from America, from the U.K., from South Africa, from Ghana and Brazil. Just knowing that our stories are globally appealing and that we have readers from all these other countries, it really goes a long way. We very much have Nigerian readers, 40 percent of our readers are Nigerian actually, and so I see that there's a community. Sometimes, I'm here in Lagos, and I'll go to dinner, or I'll go to a party and people introduce me like, "Oh that's Richard from A Nasty Boy."

It's a community and it's growing everyday, and I couldn't be more appreciative.There are still the negative responses, but I've chosen to dwell on the positive, and the good things we're doing and how it's impacting all sorts of lives, as oppose to bothering myself with the negative that does no good.

Where does your motivation to keep the publication going come from?

Getting to meet the people who are reading our stories, and actually following every single thing we do. You cannot begin to imagine how much it means to me just seeing that. Whenever I start to feel tired, I'm like no, literally the reaction on that person's face, the last time I saw the person, was priceless. That alone pushes me. I can't say, "Oh no the Western attention doesn't do good," it does in the sense that now I know our stories can be told, and that they appeal just as much to a Nigerian as they do to an American, and they're not just visiting once but they're returning just to see what the updates are.

We get emails from Nigerians and non-Nigerians and a lot of creatives, and because we've made it a point to only work with emerging talent, just getting to see how excited they are when the receive an email from us. Or if it's a DM from a Nigerian celebrity who in some way has pushed for gender equality. I woke up to a DM and I couldn't believe it. They were like, 'Let's make magic. There's no way you can say no to me. If you do I will jump of a bridge." There was such gratitude in his message. In my mind I was like "hold on" [laughs]. Just seeing how very excited people are about the prospect of working with us—that alone is just beautiful. The positive responses that we keep getting is motivation enough to encourage us to do more.

Photo by Wavy The Creator.

Going forward, what kind of content can we expect to see from the magazine?

We started out with more content about sexuality, but now we're scaling up to gender and feminism as well. Because these issues are very dear to my heart and A Nasty Boy as well. Because what I would hate is to promote, or be about, a singular narrative. I'd like for A Nasty Boy to be mostly issue-based than anything. We discuss issues with creatives and get to know about what they're doing socially and culturally. We're currently working on a list, it'll be called "Nasty's 50 Creatives Class of 2018," it's supposed to celebrate the talent that we believe will be doing more in 2018. We're covering more issues, girl power, gender issues and stuff like that.

Lastly, what do you hope to accomplish ultimately with your publication?

What is important to us is that we are able to cause a change, I can't begin to imagine for a change in policy, because we know what Nigeria is like. But, I'd like that whoever comes across A Nasty Boy gets a sense of what we're about, and [as a result] we're able to influence the way they think—just a change in thinking. If for instance, we have a daily readership of 10,000 people, and 10,000 people can see things the way we do—that's more than enough. If we're able to reach a million people all over the world through what we do, that's enough. Just pushing for more acceptance, more than tolerance—tolerance has a limit—but true acceptance, inclusion, and diversity is what I'm pushing for. There's different kinds of Nigerians and different kinds of Africans, we have to allow everyone to fit into our definition of "African." We want there to be room for other narratives.