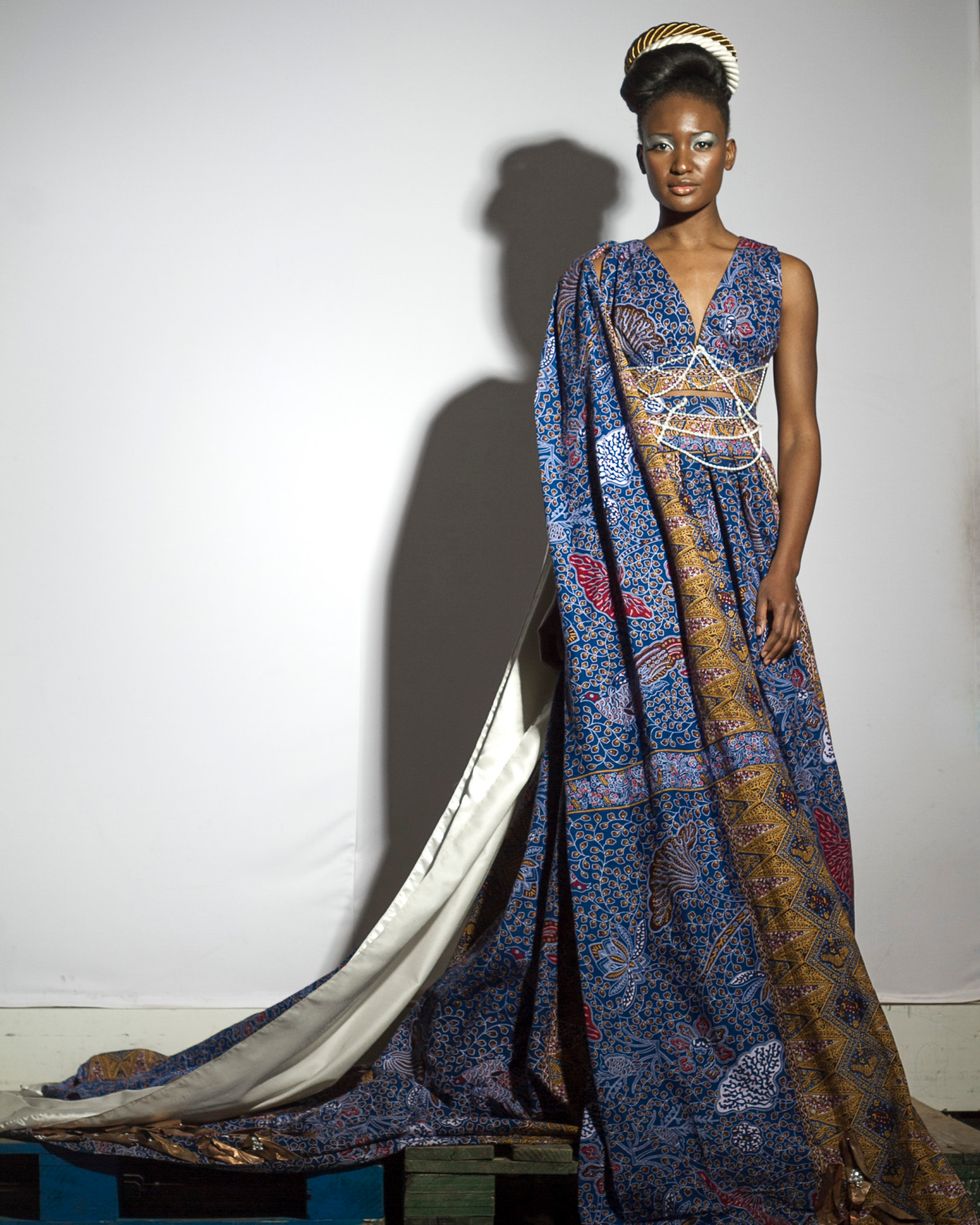 SUPAFRIK enlisted seven talented designers from Africa and the diaspora to create garments using water as their muse.

Curator and designer Chinedu Ukabam backstage with his design, The Offering. Photo by Jalani Morgan.

A collection of beautiful garments at Toronto's Royal Ontario Museum showed us that fashion and art aren’t mutually exclusive.

“Water Carry Me Go,” curated by Chinedu Ukabam of SUPAFRIK, is meant to foster a deeper conversation about water. Seven designers hailing from Africa and the diaspora created wearable garments that reflect aspects of their culture, use materials from their environment, or speak to current events such as the migration crisis.

“The history of the African Diaspora in the Western Hemisphere begins from a journey over water,” Ukabam writes. “Hundreds of years ago, millions of enslaved Africans did not survive the forced journey across the Atlantic Ocean to the Americas. Today, many African migrants are meeting the same fate of a watery grave while journeying across the Mediterranean Sea in search of a better life in Europe. Water has been a passage for displaced people around the world.”

According to Ukabam, the designers had the freedom to create their designs without being confined to commercial fashion.

“They have created garments that are a window into the cutting edge of African and Afrodiasporic fashion design while approaching the subject matter of water in ways that are deeply personal,” he says. “Nevertheless, these works cannot be separated from the historical and cultural context of the communities in which the designers are rooted or find themselves inhabiting.”

Check out the designs from “Water Carry Me Go” below, with a quick word from each designer on their thoughts on the theme, as well as why they decided to be a part of this project.

"It’s an interesting conversation on the significance of water in Africa. I wanted to be a part of that conversation."

Khumalo’s piece challenges us to perceive African women who do daily domestic work to be just as important as those who do economic work through their attire. She rethinks the clothes women wear when they carry water on their head as a uniform, just like we wear uniforms to go to work.

"The theme of the exhibit, water, has been and continues to be a vehicle for our dispersion and a source of our mythologies, and is a salient theme in our identity as Black diasporans."

This design pays homage to the orisha Yemonja, whose name stems from the Yoruba words Yey omo eja, which roughly translates as, “Mother whose children are the fish." Yemonja is widely worshipped throughout Latin America, Cuba and Haiti, with the strongest following in Barreto’s native Bahia, Brazil. The hues of blue reference the Atlantic Ocean and the white elements reference the dress of the Afro-Brazilian religion, Candomblé.

"Our earth is made up of large bodies of water connecting us all. I thought about our histories before petroleum—before we could fly—we moved on water to get from one place to the next."

Inspired by the single tear of a young Caribbean woman crying into the sea, Young’s design tells the story of the raw beauty found in her knowing her own existence is tied to the bodies of water that forcibly carried her people to new lands. For Young, the woman resolves what she feels from the past and her present reality of wholeness and humanity.

"The spirit of water is always evolving, and this evolution is dependent on how beings on the planet interact with it."

McFarlane designed this garment to capture and magnify the energy of water. She used ample amounts of fabric to convey water’s fluid movement. The copper elements also reference the Yoruba orisha, Oshun, the goddess of fresh waters.

"As soon as I saw the project title, 'Water Carry Me Go,' it brought to mind one of the biggest stories of the summer—the migrant crisis. So many men, women and children were drowning as they got into unseaworthy boats and crossed the Mediterranean in search of a better life."

Onwuka’s design contemplates the plight of thousands of migrants who die at sea while making the journey to a perceived better life. She chose white Ashoke fabric to symbolize hope and new beginnings.

"I am very passionate about connecting Africa with its Diaspora, and this was a great opportunity to do that. Water connects all of humanity."

For Ukabam, his design is a gift from a fisherman to appease Mami Wata (the water spirit) before embarking on a dangerous sea crossing to Europe. The dress includes all the things she is believed to like, such as white wine silver jewelry and fruits. The shape of the dress is reminiscent of the Abang dancers, who represent femininity, beauty and grace, from the Efik ethnic group in Nigeria.

"It will sound a bit mystical, but my first interest began with my deep love and slight obsession with water in general."

Olwendo Iwa Mazzi means “a welcome drink” in Buganda. Water is used to welcome any visitor or loved one who enters a home after a journey. Inspired by the clearness and movement of water, Wavamunno’s garment aims to demonstrate water as it exists in its many forms.