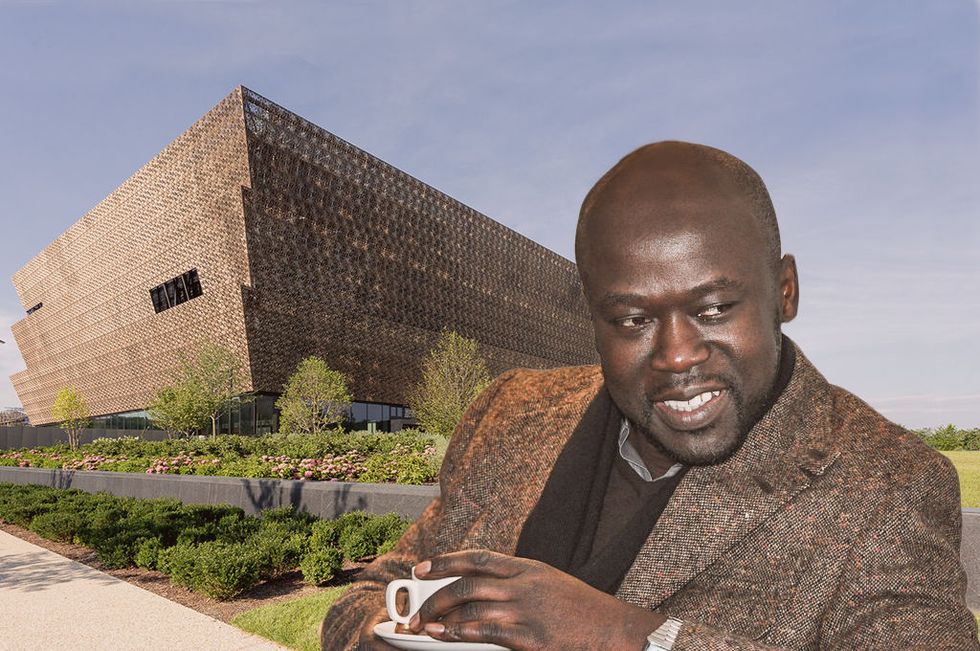 The British-Ghanaian architect behind the new National Museum of African American History and Culture wants to dispel misconceptions about African architecture.

Since its initial release in 2011, and second compact edition published last fall from Thames & Hudson, Adjaye, Africa, Architecture, represents a culmination of 11 years David Adjaye’s efforts to put together a comprehensive guide to the African continent’s wide range of building projects. It features six terrains, the Maghreb, Desert, The Sahel, Savannah and Grassland, Mountain and Highveld, and Forest, each with their own dedicated section. Essays from established architects and academics on each area, along with an essay and travel notes by Adjaye himself, richly describe each area and city.

Adjaye was born in Dar es Salaam in Tanzania, but as his father was a diplomat, he’s moved around and lived in almost every region on the continent: East Africa, Central Africa, West Africa and North Africa.

“We were placed in the emerging cities, the new cities that were rising,” Adjaye tells OkayAfrica. “For me, the continent of Africa is therefore a group of rising metropolitan, modernist cities and that memory has been powerful for me.”

The more portable version of the book comes at an important time for Adjaye—he was the lead designer for the National Museum of African American Historyand Culture that recently opened on the National Mall and was knighted by the Queen of England in December—and for Africa, as Adjaye notes that for architects today, the rapid expansion of the cities on the continent offer tremendous opportunity.

As Adjaye documented these buildings over time, he found most surprising that, though some of modernism’s great experiments were played out in the biggest cities on the continent, many of the citizens of these cities co-opted the universal form of construction that modernity presents and made it something local.

“In cities such as Abuja, Accra, Kinshasa and Maputo, I saw ways of constructing architecture that combine the science and technology of our age with their own identity and cultural nuances,” Adjaye says. “Working on the book taught me that you can’t understand Africa until you realize that it has six distinct climatic zones. Each one is very precise and extreme—each place, of course, has its own particularities, but culture grows from climate.”

This is why Adjaye organized his book into six terrain sections, as the diversity between each place lends itself to unique design needs. “If you look at the metropolitan centers and capitals as just individual phenomena—what I call population density and GDP—you miss how to understand the nuances between them,” Adjaye says. Over the course of several years as he was collecting information for the book, Adjaye realized the best way to understand the differences was to understand the geography.

“Foreigners look at Africa with its dozens of countries and find it bewildering,” he says. “But if you think of it as six climatic zones, then you can start to understand it. An American architect can look at Mali and Chad and relate to them as an Arizona-type region, or see Ghana and Mozambique as a bit like California.”

Combining cities in each zone also serves as a way to abstain from isolating any one architect or historic movement, and instead find, “architecture as a collective identity, not a series of freestanding icons.”

When photographing each of these cities, Adjaye says he was looking at the layering of architectural types and influences. “Despite the colonial tabula rasa and the blanket of modernity that engulfed many African cities after independence, the cultural, aesthetic and social references of Africa generate a very specific kind of architecture” Adjaye says. “The cities reflect and support a particular social dynamic that is distinct from other cultures, while the traditional, rural architecture responds to the specific geography of place—environmentally and culturally.” In other words traditional African architecture and the way it was built offers useful lessons in working with climate, topography and cultivating a sense of place.

For architects working within these cities, keeping Adjaye’s climate notes in mind is imperative. “The political, economic and educational support for architects in Africa has been missing until recently,” he says. “Things are very different now. We have entered a new age for African architects who are benefitting from growth across the continent and we will begin to see the physical manifestation of this new generation’s work very soon.” Many countries, Adjaye says, are wanting to build new administrative centers that reflect the modern world, so this new architecture needs to be used in a way that helps them establish a relationship with their citizens.

“We need to start taking our records more seriously and start organizing them as part of our DNA,” Adjaye says. “We need to start building institutions that look after these places, that value these places, so when you come in to build, you are directed to spend money on improving that quality, which becomes the uniqueness, which will make something like Jamestown the Soho of Accra with a unique identity.”

Adjaye notes that there is now a new generation of architects working to establish a contemporary African architecture that’s more responsive to the idea of place, and will embody lessons from vernacular African architecture, combined with a contemporary sensibility. “I want to dispel the Western world misconception of Africa as an impoverished or unpeopled expanse and to explore the important relationships between the modern world and the ancient as well as the importance of geography rather than political boundaries to the DNA of African cities. I wanted to give a sense of an entire continent with all of its diversity as well as its consistencies. I set out to create snapshots—images which would convey the intensity of life on the continent—the social interaction and the animation that architecture has.”

Though many countries on the continent are in flux, the prevalence of democracy and the transforming economic potential as a result are what excites Adjaye most. “To date there has been more output from countries like South Africa, Egypt and Angola, but there are also lessons to be learned from places, which have a strong heritage—such as the desert architecture of Mali,” Adjaye says. ”I have also started to see a pride of place in Uganda, Kenya, Ghana and Nigeria. It is very exciting. I hope readers will be able to see that broader picture.”