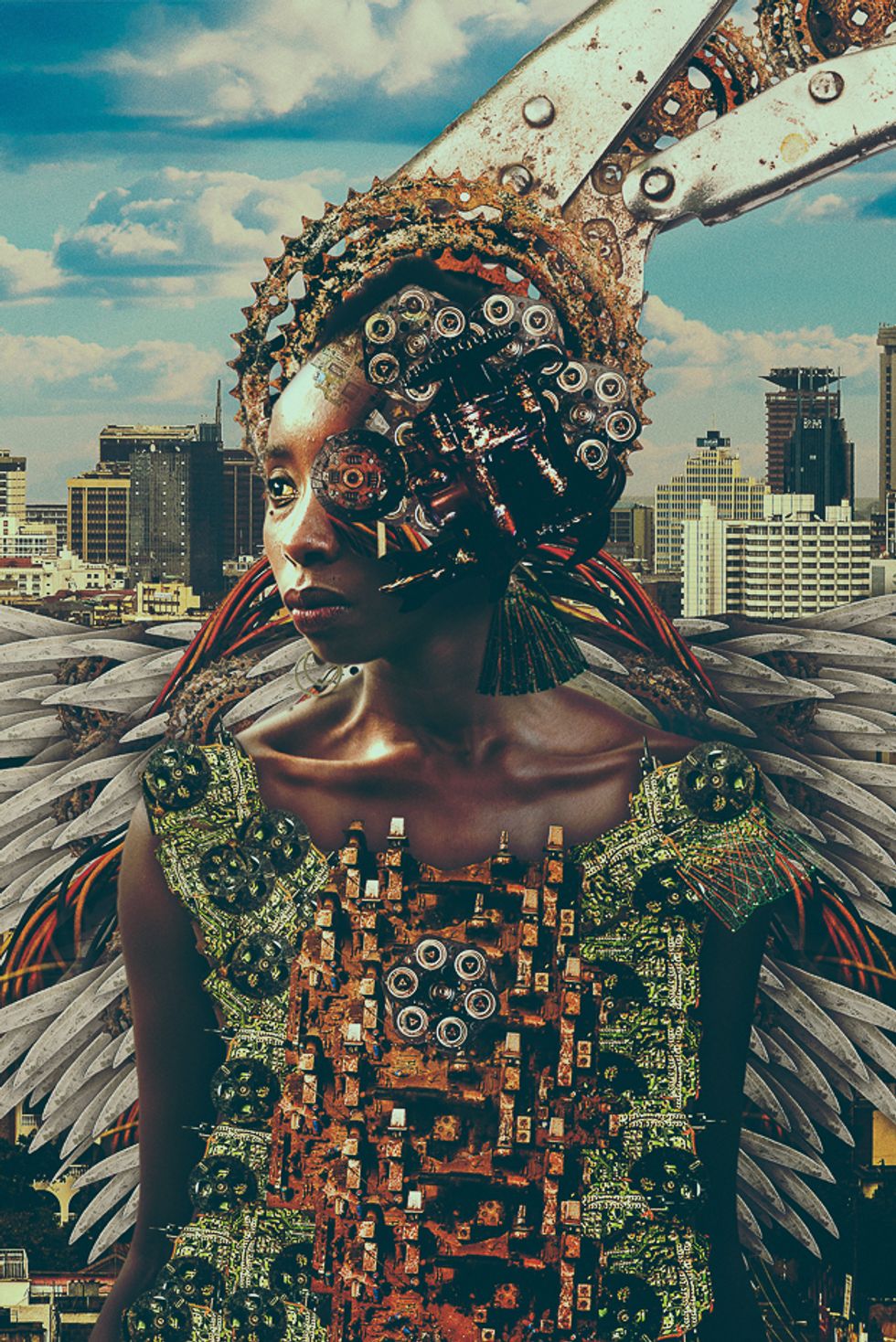 Tahir Carl Karmali takes us behind the scenes of his stunning portraits of Kenya's 'jua kali' workers.

The photos from Kenyan visual artist Tahir Carl Karmali’s Jua Kali series are straight out of Mad Max, if Mad Max was in Nairobi and starred Kenyan artisans.

Born and raised in Nairobi, Karmali moved to New York two years ago to pursue his Masters of Digital Photography at SVA. For Jua Kali, he worked closely with found object artists and sculptors to explore the theme of the Kenyan economy and how the informal sector, the jua kali workers, are fueling the city of Nairobi.

The incredible images recently took center stage at a new exhibition in Brooklyn. We caught up with Karmali this week at the United Photo Industries Gallery in Dumbo.

Jua Kali is inspired by the informal sector in Kenya, and more specifically in Nairobi. Basically how the informal side of the Kenyan economy is a huge wheel within our day to day and how we experience living in Nairobi.

Jua kali for me has been an inspiring point of reference whenever I think about my city and the resilience of the people that live there and the creativity that goes behind what they create and what they make. The exhibit itself are portraits of people that have inspired me, portraits of people that have shown this philosophy of resilience and pushing forward to create the world that they want to live in, that's not dictated by the formal industry.

Who are the people in the pictures?

They all have different roles. Some of them are dancers, writers, fashion designers, performance artists, photographers, sculptors. Mostly people that work within a creative industry. That's really the focus of the Jua Kali narrative is that it's about creation, it's about thinking outside of the formalized way of working.

Can you tell us a little about the making of the pictures?

The images are basically a portrait, a background and individual bits and pieces of things that can be recycled or repurposed into something. All of them I sort of found in dump sites and recycling areas and places where people go and look for objects to repurpose and recreate them into something else.

Where were they shot?

One of the backgrounds is in Nairobi, and quite a lot of them are sort of like the “epic African landscape” as it were. Some of them are in Ethiopia. All the people I shot in Nairobi, and all the bits and pieces of junk and stuff that's for repurposing was shot in and around Nairobi as well.

Is each picture saying something different?

Each picture has a different narrative. It concentrates on different characters and different ideas. And so the idea of Jua Kali is so that people who see the image can for just that brief moment believe in this surreality, just believe this brief moment of wonder. Either are they a superhero or an angel or a cyborg? Or what are these characters? And then slowly look at the image and understand how the image has been created in terms of collage. Because it’s very collage, so when you go close to the image then you understand how each of the bits and pieces are put together. Because it's a very flat and two dimensional image and doesn't have that sense of depth that you would have with that photorealistic composite. What I wanted is that people would believe this reality for just a moment and then understand how it actually fits together.

What do you feel the reality of Nairobi is?

Nairobi right now is a hub of creativity. There's a whole bunch of things that are just bursting out of Nairobi and just wanting to be seen and wanting to be noticed, not only internationally but within the continent. Nairobi as not just a center for where the U.N. is and all the NGO organizations are, it's a place where fashion is created, where photography is. There are far more photographers in Nairobi coming up within the past five years that I've seen and artists and dancers and theater, and writing especially, all of this is just coming up. I'm really proud of the Kenyan creatives and what we have been able to show in our narratives.

Do you consider your work Afrofuturist?

I mean, it has been told that it's Afrofuturist to me. I never made the work with an intention of it being Afrofuturist. I think the concept is what drove the imagery to look like that. I think that Afrofuturism is a cool movement, it's a cool idea and I do enjoy looking at Afrofuturist work, but I think Jua Kali itself was more focused on the concept of the informal industry and the concept of how these things work together and how can I, in my head, put together these characters, these icons using the materials that people who repurpose and recycle and sample these kind of objects.

Could you expand on what you mean by informal economy?

Jua kali itself means "fierce sun". All of these portraits that are taken, none of them are taken within a studio, they're all taken outside using sunlight and a canvas backdrop. There was no set-up where it's shot in a studio and with lights. If you look at the light on the face and you look at how people are lit, it's all lit with sunlight, which is kind of fun. Jua kali means "fierce sun" and initially referred to the people who used to work in labor intensive jobs in the sun. And this idea of being outside in the fierce sun, so the jua kali workers.

Then this slowly evolved into the informal industry which is basically people who work outside of the formalized economy, that's the city, that's things that are governed by tax, that's monitored. People who sort of wake up one day and decide to create, so they make furniture, they make kitchen items, anything. They make pretty much anything. Over the past few years the term jua kali has sort of been referred to and used colloquially as something that is substandard because of its connection to the informal. From my experience and my understanding the whole philosophy behind jua kali and the whole idea of jua kali is about resilience, it's making due with what we can because the bar of entry to certain businesses in Kenya and all over Africa can be really difficult. The honest truth is people just want to relate to each other and sell to each other what they've created and not follow such a huge formalized business structure.

How is the series received back in Kenya versus here in New York?

When I showed the exhibit in Kenya, I think that people lent themselves more to the fantasy of it and just sort of look at the images as seeing themselves in a different light from what is usually depicted in either fashion or journalistic photography or whatever is seen internationally. There are a lot of artists in Kenya who focus on depicting a different narrative than what we're used to seeing in mainstream media. People in Kenya lent more to looking at it as a point of surreality and fantasy and seeing themselves differently, and the idea of jua kali differently.

Here in the United States and around the world, people are more interested in the “what”. What is this? Why is this? Jua kali in Kenya is something very intrinsic in our culture so we understand it the moment it's said, but everybody pretty much outside of Africa probably are very inquisitive and wanting to know what does this mean. What are these pieces? Why these pieces? Who are these people? What are these people? What do they do and so on. One is believing in fantasy and the other one is trying to rationalize the fantasy.

Can you tell us about Value, your upcoming show at Brooklyn College?

It's photographs of [Nairobi-based] male sex workers with their most valuable possessions. What the exhibit looks to do is question your perceptions of value and perceptions of this idea of being a sex worker. What does it mean to be a sex worker and more so this idea of men being sex workers and the African perception or the Kenyan perception of what men should be doing, what [they] should not be doing. Should they be sexualized, should they not be sexualized and so on. It also has these undercurrents of questioning homosexuality. And also having people relate to them by seeing what their most valuable possession is. What do they value the most and how is that different from what you value? How is that different from anybody else in the world really?

Are you working on anything else right now?

My next project is something that addresses my heritage. My father is fourth generation Kenyan from Indian heritage and my mother is from the Seychelles and met my father in Edinburgh. I see a lot of artwork from Africa, the Armory Show and so on. The narratives that I see and what I see are not things that I relate to directly. My experience growing up in Nairobi was different from the narratives that I see in the fine art scene. What I want to do is broaden the narrative for what African artists can and cannot be. This idea of exploring my own heritage, my own Indian-Kenyan heritage, my Seychellois heritage and what it was to grow up in Kenya as both a mixed race person, as a person with multiple cultural attachments and also watching other Kenyan cultures around me and relating to those. How is that part of my character?

A lot of the time, what is considered as African art is usually tropes that are determined by things essentially that are tribal or things that are essentially to do with skin, like masks and fabrics and beads and landscapes and all these bits and pieces. What I want to do is open up the conversation to say like, "Hey, there are other populations within Africa that have a varied narrative and we don't all fit within the same cookie cutter mold of what African art should look like."