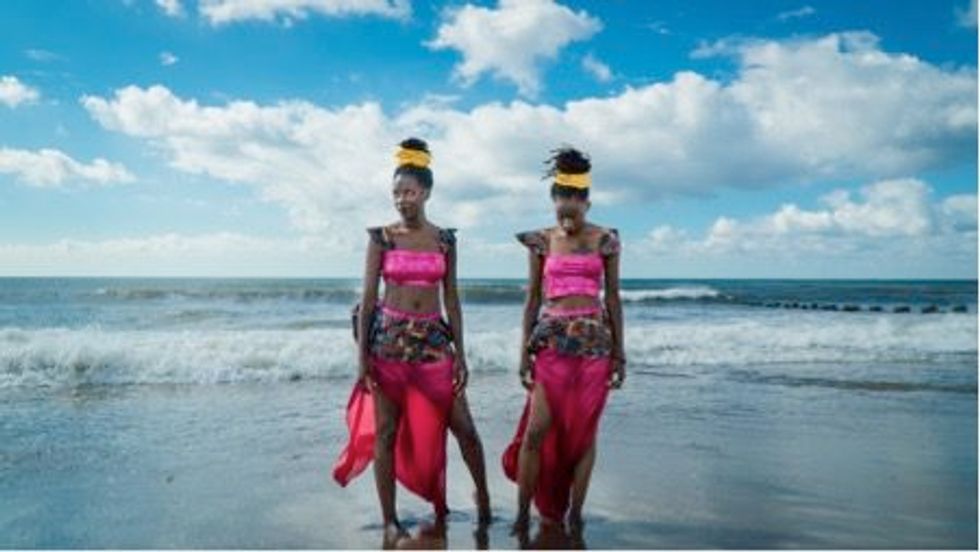 Ben Bronfman and Teachers team up with South Africa's DJ Spoko in this '80s inspired video for their new single.

You might not know the name Teachers but you’ve heard their work.

Bronfman and Teachers are now channeling the sounds of South African ‘bacardi house’ and kwaito for their latest single “Ocean.”

The track sees them join forces with Pretoria’s DJ Spoko, who produced the beat for “Ocean,” on a breezy, dance floor exploration into love and lust.

The single's music video, premiering here today, was inspired by a long-lost afro-disco video from the 1980s.

The video follows Bronfman and a pair of dancers to NYC’s Rockaway Beach, as they dance across areas affected by Hurricane Sandy with the backdrop of artist Katharina Grosse's outdoor installation, Rockaway!

Check out the “Ocean” video above and grab the single here.

Below, we spoke to Bronfman about “Ocean,” his Kanye West productions and what’s on deck for Teachers.

Was there a '80s afro-disco video in particular that inspired the new video for "Ocean?"

Not really a specific one, it's just what happens when you watch hours and hours of African '80s and '90s videos on YouTube (laughing). But we did try to make sure the video has an environmentalist theme, even though you can't really tell.

We shot it out at Rockaway Beach at the Fort Tilden installation by Katharina Grosse. She does art installations after natural disasters like Hurricane Katrina or Sandy. The houses in the video were destroyed by Sandy. I was saying to someone the other day that it's insane that we keep naming these natural disasters after women, we should be naming these mega storms after the large corporations that continue to pollute the earth without paying for it!

How did you create the beat of the track? It sounds a bit like South African kwaito.

DJ Spoko from South Africa made the beat. He lives in Pretoria. When I first heard it I just knew the band could do something really exciting with it. I had a bunch of ideas for vocal melodies immediately. I'm happy we were able to come together make something out of it. It's really nice to blend the electronic drums with real drums, add guitars, overlay extra keyboards etc. I think the track really came to life.

Tell us about the two dancers featured in the video. Who are they?

The dancers in the video are sisters named Ntangou and Ngonda, they're from the Young Paris crew and they normally dance with him. I recently produced African Vogue, which is a mixtape by Young Paris and so I found myself playing guitar for a Young Paris live show we did at Central Park SummerStage [Okayafrica's SummerStage showcase].

Ntangou and Ngonda were dancing during the set and I remember getting the idea to shoot the video while we were playing our set. They couldn't have been nicer about the whole thing 'cause we ended up shooting it like three days later. They came up with their own outfits and also came up with the dance movements as well. It really worked for the video and the song. It was nice to see them get so into it.

Is there a new album on the way from Teachers? What can you tell us about it? Did you guys collaborate with other artists on it?

There's something on the way for Teachers, for now we need to remain hush hush, but all I can say is just stay tuned. We've got tunes boi!

Is African music having a resurgence in New York and the American scene?

I do see a resurgence but to me it's always been here. African sounds were always around me because of my mother—my mother's side of the family goes back to West Africa and my father's side to Eastern Europe. Growing up in NYC, my mother was always taking us to the African Art Museum, the Schomburg Center, or taking us to book readings about the African or African-American experience.

So to me it's something I've always lived with which I guess is really interesting—because we were always very conscious and aware of "Africa" more than just being African-American, Jewish family. The first time I went to Africa was when I was 14 and, of course, remember when Paul Simon made African sounds really mainstream in the '80s.

So it was there when I was a kid, and then again as a teenager when I got into Talking Heads and Fela Kuti. When I was in my late teens I toured with Keziah Jones, and so we spent a lot of time talking and thinking about African sounds of past and present. Recently, I was just in eight African countries, so you know, I'm into this shit proper!

Your productions for Kanye West sound like they could've been influenced by African polyrhythms and syncopated melodies.

You know, again it's like one of those things where because the rhythms are inside of me and are pumping through my blood it's tough to say "oh, this was African" or "this wasn't"—to me, I hear everything in polyrhythms, if I hear a beat, I hear four others on top of it.

The vocal rhythm on the "Monster" beat has an African chant influence. So yeah, on one of them, there's a direct African influence.