Eyes on the Ground: Terror in West Cameroon 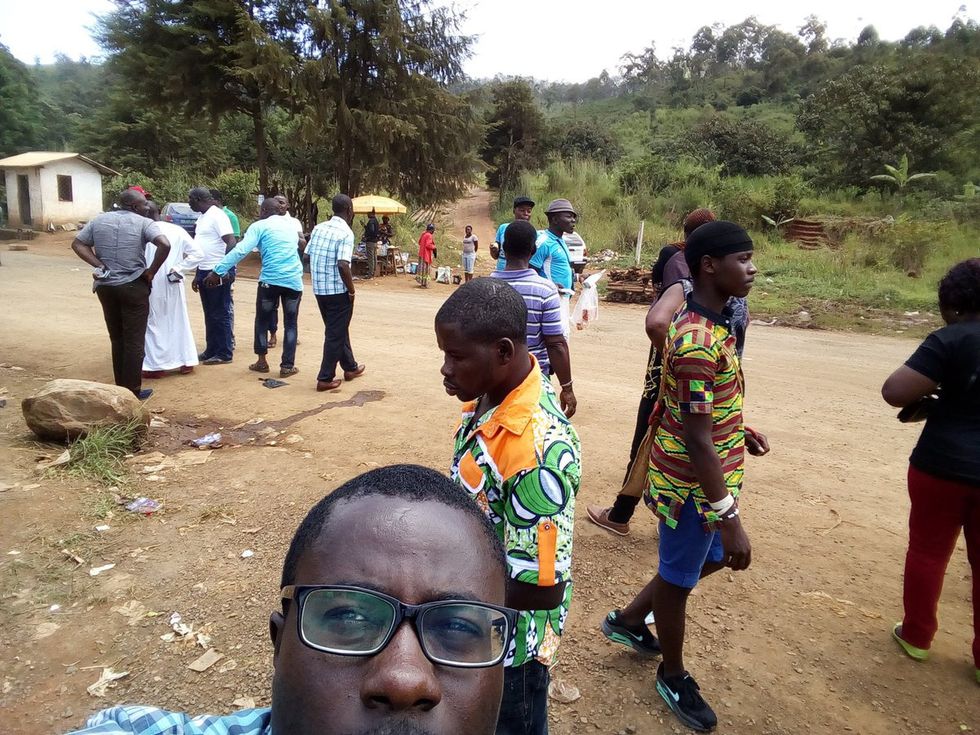 A diaspora Cameroonian tours the breakaway region to see for his own eyes what life is like under occupation.

I wasn't very sure I'd be granted entry into Cameroon on September 20 when I landed at the Douala International airport. I had been advised, by some, to enter through Nigeria. I had already seen ample evidence and read stories that such fears are founded, given the number of Cameroonians from the diaspora being turned back at the airport.

In addition, there are stories abound of Cameroonians entering the country and later on being rounded up and dumped in the dreaded Kondengui maximum security prison in Yaounde.

To make matters worse, members of Paul Biya's government had made it clear that the social unrest in the western part of the country was being sponsored by Cameroonians residing in the diaspora.

This in essence, made every Cameroonian residing abroad, good foil for security forces to target. It was against this backdrop of resentment that I found myself being fingerprinted and photographed at the Douala airport.

After this, the young lady at the police security booth took a look at me, handed over my passport and then waved my through. I was in and at least some of my fears were eased.

I heaved a sigh of relief and made my way to the oppressively hot, chaotic and crowded baggage collection area.

Sweating profusely, I succeeded to haul my bags off the carousel to the 'customs area' where an unsmiling officer asked me to open one of the bags. After a few seconds of looking, he told me to put my bags on the airport cart and be on my way.

Just as I was about to exit through the sliding doors, the same lady who had earlier gone through my passport, after we alighted from the plane, confronted me:

"You no fit just commot so. Give me chocolate," she said.

Figuratively, she was asking for a bribe or a tip and it took me a couple of seconds for it to sink in. I reached into my wallet and pulled out a 2,000 Franc CFA note—which I had saved just for something like this—and pressed it into the palm of her hand.

Her face lit up and she let me through.

The journey from Douala to Bamenda by public transport took me through towns like Tiko, Ekona, Kumba, Mamfe (in the Southwest region) and Widikum, Batibo, Bali (in the Northwest region).

While traveling to Tatum, a village in Banso, NWR of #Cameroon, I bypassed a number of military trucks heading to #Kumbo. #AnglophoneCrisis pic.twitter.com/Bbk6jRq1MR
— Israel Ayongwa (@iayongwa) September 29, 2017

Traveling by night during this tense climate of social unrest, which has paralyzed activities in West Cameroon (English-speaking regions of Northwest and Southwest) for the past 12 months, is not something I would gladly advice anyone to do, especially if you haven't already been in the country for some time.

Before embarking on this trip, I had taken the extra disposition to get an ID card, because using a passport as a form of identification is not recommended, considering the number of security forces and a regime stuck on a false notion that civil unrest is being masterminded by Cameroonians in the diaspora.

Just before we arrived in Tiko, the first town on the way from French Cameroun into English Cameroon, we reached the first (of many) security stops, manned by at least 20 heavily armed, combat ready military operatives—majority in balaclavas. This was like a scene from the movies with commandos all set for a raid. The only difference here was that we were all just unarmed passengers living in the reality of a police state.

All passengers on the bus were ordered (in French) to dismount and show their ID cards, by someone who I guess was the commander of this security post. We all obliged.

Next, the driver of our bus was ordered to open the cargo area and every bag was pulled out. Each passenger had to identify his or her luggage and open it for 'checks.'

I stood back in amusement and watched the commander ask everyone to dig through the contents of every bag.

When it came my turn, the commander insisted on seeing what was at the bottom of the bag. So I had to pull out packs of Vaseline I had bought for my family, clothes, shoes and other items I had brought as gifts. Not once did I ask what he was searching for. Common sense told me not to ask. During stops like this, you don't question the almighty security. You just obey.

After the search for nonexistent arms was over, our bags were loaded once more into the cargo area and we were on our way.

We passed now fewer than 5 security stops before we got to Bamenda. At every stop we had to get off the bus, show our ID cards to an officer, and walk for about 50 meters where we'd board the bus again. The only thing we were spared from was another bag search.

With all these checks and interruptions, a journey of 7 hours (378 km) ends up being 9 hours and if you're the type who naps during long journeys, it's not the trip for you.

Not much has changed in Bamenda in the five years since I was here. A few new buildings have cropped up here and there but what changed for worse is the state of the roads around the town. It's fair to say some of the roads linking the regional capital of Bamenda and neighbouring towns like Bali and Bambili are in a relatively better shape than roads around town.

When looking for reasons why Bamenda is one of the bastions of the current social unrest, you just need to look at the abysmal nature of the roads, disproportionate youth unemployment and decaying infrastructure. There's a feeling among many here (and rightly so) that the deliberate neglect in development in this part of the country is a punitive measure on a people who have traditionally sided with the opposition SDF party.

The internet shutdown for a second time in West Cameroon is not helping the government's image in this part of the country either.

Seeing is believing. Last 48 hours I've been in #Bamenda without internet. Only got connected now around #Santa, gateway into NWR. #KeepItOn pic.twitter.com/fz9AEhvs4V
— Israel Ayongwa (@iayongwa) October 8, 2017

These two towns, just like other towns in West Cameroon, witnessed protests on September 22 and October 1. On my way to Tatum, I bypassed military trucks (in the car I was traveling in), which was headed for the town of Kumbo, not far from Tatum.

Despite the heavy military deployment, some of the residents I spoke to in Tatum told me, come October 1, that they'll go out and celebrate the independence of Southern Cameroon (former trustee territory under British rule) and not even the military would stop them. I even met a young man who was rehearsing the Southern Cameroons anthem for the event. Kids as young as 5 proudly sing the anthem in Tatum and for many in Ndop, watching the banned cable network, Southern Cameroons Broadcasting Television (SCBTV) station is the preferred choice.

So many people here identify with the Southern Cameroons movement that even if the Biya government succeeds to put down the current social unrest, the seeds for another protest have already been sown in the minds of toddlers and teenagers.

It might make more sense to look into the root causes of this unrest and seek ways to address them rather than sending out delegations of 'elites' who have lost touch with their base and continuous militarization of the region.

Something happened in West Cameroon on October 1 and October 2 after people came out to peacefully protest which has, which has been described by some as a genocide or massacre, including the human rights NGO, REDHAC.

I got testimony from a relative in Ndop who recounted how an unarmed fisherman returning home on a bike was gunned down for no reason. Another relative in Ekona recounted how many youths in her neighbourhood were killed or wounded and how her father-in-law came close to being arrested and the numerous houses broken into and property carted off by the military.

I also got first-hand accounts from Bafut of youths who sustained bullet wounds and—after being transported to the hospital and having bullets extracted—had to escape into the bushes for fear of re-arrest at the health center.

Many accounts exists all over West Cameroon of civilians getting killed or raped in their homes. Of property destroyed, abductions, mass graves and people hiding in bushes.

About 23 km south of Bamenda is Santa and the Matazem tollgate. What used to be a tollgate at the gateway into the Northwest region is now a security control where ID cards are checked. What intrigued me as I left the Northwest region was that there are 2 security posts around the tollgate area, about 50 metres apart, each performing the same task: checking ID cards.

When I wondered why there are two security posts in such close proximity, one passenger on the bus humorously replied that this was a border crossing with 2 checkpoints: one checkpoint is for the former British Southern Cameroons, while the other for La Republique du Cameroun.

At a time when the government is preaching the gospel of a 'one and indivisible Cameroon', security controls littered all over West Cameroon (and clearly absent in much of French Cameroon) only reinforce the idea that the people are under occupation, and the feeling of oneness or belonging is an alien concept.

Israel Ayongwa is a Cameroonian-born, Canadian-based IT consultant and researcher, focusing on Anglophone populations in Cameroon and African governance as well as human and digital rights. Follow him on Twitter.