'With Us Or Against Us' - Boycott Israel 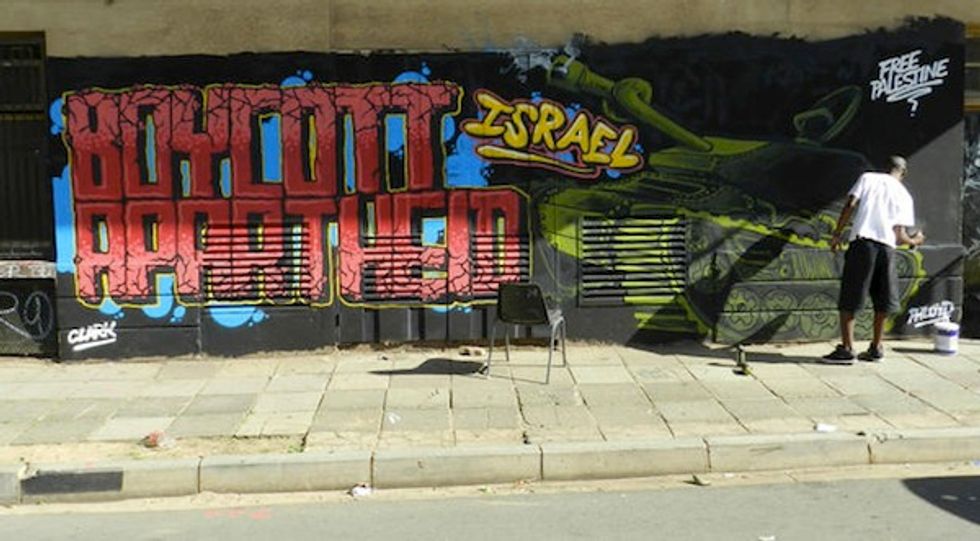 Under what conditions should South African musicians boycott Israel? This question was raised among artists asked to boycott a recent music festival in Cape Town.

A few weeks ago, the Cape Town World Music Festival was the subject of a lot of controversy with calls to boycott the festival because of an Israeli band's participation. Below features an opinion piece by South African writer/activist Tabitha Paine, as she explores the issues surrounding South African musicians, and their complicated relationships with political activism.

I fought long and hard to get seats to the Red Hot Chili Peppers concert in Cape Town. I jumped up out of my seat at work when it was confirmed that I had them. Then I heard that there was a boycott on them because they played a show in Tel Aviv, Israel back in September. It was an excruciating decision to make, but I decided not to go, sell my ticket, and give the money to the Boycott Divest Sanction Movement(BDS) instead. I stand by the decision to boycott. I went to the Cape Town World Music Festival (WMF) to find out if the same applied to Boom Pam, the rock trio from Israel.

To give the issues around the festival context, let me start by saying that the South African music industry is pathetic. It is pathetic in how it treats musicians, artists, technicians, etc. It has some incredible musicians that are original and talented. Yet almost all musicians can’t play full time, not even those that are established. They struggle to survive and don’t get many opportunities to make money off their craft. It's at events like the Cape Town World Music Festival that they are afforded the rare opportunity to be compensated for their art, so when BDS called for a total boycott on the festival, it seemed like an unfair request.

The formation of BDS was inspired by the effectiveness of economic and cultural boycotts, divestment and sanctions on the South African apartheid regime. Now it calls for an international solidarity against the Israeli apartheid government in order to put an end to the oppression and massacre of the Palestinian people. It's important to note that the boycotts, divestment and sanctions are economic and cultural. It's equally important to note that it calls for solidarity from the international community as well as Israelis. The Israeli government uses importation of culture into foreign countries as a common propaganda technique to try to bolster the country’s image. BDS called for a boycott of the Cape Town World Music Festival on two grounds: that the organisers were allowing an Israeli band (Boom Pam) to play at the festival, and that Boom Pam was sponsored (airplane ticket) by the Israeli government.

BDS contacted the event organisers and some of the musicians playing at the festival, such as Pops Mohamed and The Brother Moves On (TBMO). One of the festival’s organisers, Hagar Graiser, was asked to remove Boom Pam from the schedule but due to the timing of the request, she apologized for the oversight, while standing firm that she could not remove Boom Pan from the schedule.

The Brother Moves On (TBMO) made a public statement saying that they did not agree with the boycott and the way BDS had interacted with the musicians. They described BDS as hostile, uncompromising, disengaged, and suggested that simply bringing an Israeli band to South Africa shouldn’t automatically result in a boycott – that not all Israelis are pro-Israeli government. In addition, they did not appreciate the manner in which BDS engaged with the musicians- BDS was dictating what they should do instead of engaging in discussion with them.

It is in this context that I went in to find out what some of the South African bands and Boom Pam thought of the boycott: Do South African musicians care about the fact that Palestinians are being bombed, evicted and live under appalling conditions, and whether Boom Pam should have been boycotted?

"given the short notice, nothing could be done about this. Although the Palestine-Israel war is important, music transcends politics. While I sympathise with BDS’s cause and recognize that inviting an Israeli band was an oversight- numerous Palestinian bands endorse Boom Pam*."

Ms. Graiser explained that the festival is not a political organization, but rather a platform for musicians. Instead of boycotting, she suggested all involved parties should be more interested in conversation and cultural exchange. She emphasized that the festival was meant to bring people together from all parts of the world in a common love for music. It was not meant to be political – it was meant to unify. This sounded deeply political to me, and also seemed as if Ms. Graiser didn’t understand how cultural boycotts work. This is something I hoped BDS had tried to explain.

In the afternoon of the second day of the festival I talked to the South African theatrical, Balkan, circus rock band, Dirty Bounce. At the beginning of the interview there were six band members, by the end there were three. The general consensus of the band was that music and politics are separate. All except Roland Hunter, who was open to the idea that politics influences music and music influences politics. The band’s main point was that the purpose of the festival, and music in general, is to unite, to bring people and cultures together – in the words of Oliver Mtukudzi: “We use music to diffuse tension”. The band believes it's better for a music event to be apolitical – that musicians are struggling and that if they get an opportunity they should take it.

At the end of the night I was to interview Boom Pam. I wasn’t sure what to expect from the band and to be honest, I knew very little about them. Upon meeting them I noticed that guitarist Uri Brauner Kinrot had “Peace, Love, Unity” written on his shirt. I thought that was an interesting start. After we introduced ourselves I explained the purpose of interviewing them, and when I mentioned the BDS boycott I got the same reaction that I had gotten from some of the other bands when speaking to them: discomfort with a bit of anger crossed their faces like a shadow. And they explained why.

"Peace and unity are not what boycotts are about – they are divisive"- drummer Itamar Levi.

The band had problems with BDS’s interactions and expressed that they wished BDS had contacted them and interacted with them in a more peaceful way. They said they didn’t agree with what the Israeli government is doing. Like the other bands, Boom Pam kept reiterating that they are not political. Music (and love) comes before politics they said. Boom Pam didn’t seem to see a connection between politics and culture, and felt that their impact was cultural, not political. They said that they support whoever supports unity. They did acknowledge that the Israeli government uses bands like them to export Israeli alternative culture. But they described the cultural exchange as being exposed to people (and thus other cultures and music styles) that they otherwise wouldn’t have been exposed to, as well as exposing those people to their music and style of music. They said that this is the only support they get from their government, that they are not mainstream, and thus have a harder time making money and gaining exposure.

A couple of days later I met with Carrie Schwartz, a member of BDS' media side. I tried to get clarity on some of the issues that had arisen and the reaction I received was frustrating. I began by explaining that I was writing an article about BDS and the WMF. Her reaction was “so did you go?” I began to explain that I was trying to stay neutral, at which point she interjected that you cannot be neutral – you always take a side. This rhetoric is of course very flawed and allows no room for helping people to understand. It is in fact the opposite – it assumes you already understand and it assumes BDS already understands.

What is also frustrating is that I do take a stand: I acknowledge that my actions, intended or not, are political. More than this I am consciously political, support the Palestinians, and am in favour of what BDS is doing generally. But I'm not about to blindly accept what BDS does. I think they were off the mark on this one, and more than that, the way they conducted themselves was harmful to them as a movement. There was no room for communication in our brief discussion – I was talked at and not listened to when I tried to convey what issues the musicians had with BDS. When I asked about the fact that Boom Pam has spoken out against the Israeli government and did so again at the festival, her reaction was that they didn’t make a more explicit, precise statement and that they need to do more in order to show support. This is odd to me – surely if you say “I do not agree with what the Israeli government is doing and I distance myself from them” this clearly implies that you are against, for example, the bombing of Gaza? It seems like becoming detailed could lose people in an issue that most people don’t understand. As far as BDS is concerned, you are either with us or against us, on our terms. Sound familiar?

What do we do with this situation? On the one hand we have South African bands that see music and themselves as apolitical, and seem to be generally apathetic and uninformed about the Palestine-Israel war. These same musicians are struggling and have no support from an industry that sucks them dry. Then you have an international act that also sees music as something that can be kept separate from politics, but has nonetheless rejected the Israeli government’s actions and are sympathetic to the Palestinians’ cause. Then you have BDS who require solidarity with Palestinians, but a very specific form of solidarity, which they dictate to bands and the public. In demanding this they are hostile, uncompromising and unsympathetic. And then you have the Palestinians. We are all complicit in their deaths through our inaction, and through active divisiveness produced as a result of either or approaches instead of information being given about the war and the connection between culture and politics so that the participants can choose not to participate. The problem at hand is complex to say the least.

*This has not been confirmed.