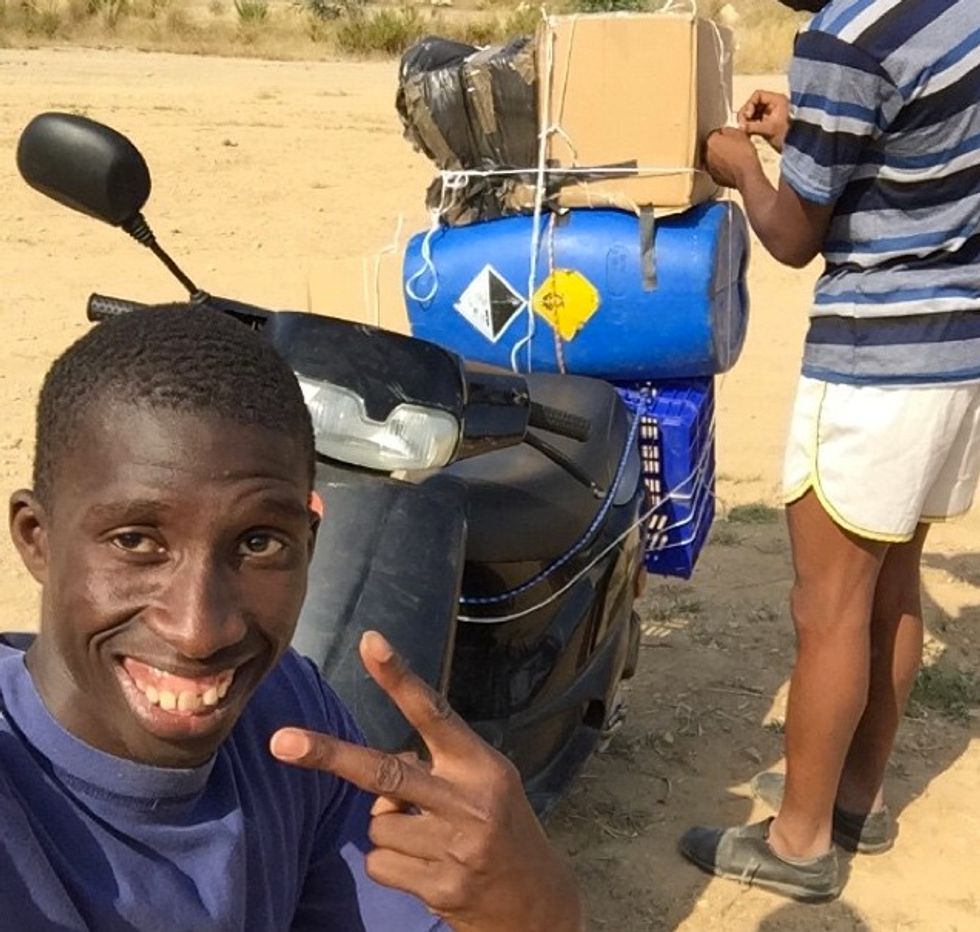 An Instagram account purportedly belonging to a Senegalese man documenting his migration from Dakar to Spain was revealed to be a hoax.

Yesterday, in an article titled "Migrant' Instagrams His Perilous Journey By Truck And Rowing Boat To Reach Spain From North Africa," The Huffington Post UK reported on the recent appearance of an Instagram account purportedly from a Senegalese man in his early 20s documenting his migration from Dakar to Spain through a series of selfies. The account, which launched a week ago, was attributed to the user "Abdou Diouf" (@abdoudiouf1993), and features a series of fifteen selfies and accompanying short captions describing each leg of the alleged "journey" paired with promotional hashtags like #travelgram, #bestdayever, #nopainnogain, and #foodporn.

Today, it was revealed that the account is in fact a hoax. The man in the pictures is Hagi Toure, a Barcelona-based beach handball player who was hired to act as part of the upcoming Getxophoto photography exhibition in Getxo, Spain.

According to TIME, the campaign was produced by Spanish creative agency and production company Volga, and directed by the Barcelona studio Manson, who the festival hired to produce and direct a series of videos and images that would promote the event and also raise questions about the use of photography in today’s society.

Volga's Oriol Caba told TIME that the project intended to raise "questions" about the use of self-image. "In developed countries, there’s a use of the self-image that is not common to other parts of the globe," Caba said in the TIME interview. “[We wanted] to show how the banality of the treatment of the self-image could be used to produce an image of the self but in a very different context, like the dangerous and traumatic trips people embark on to get a better life. We thought it was strong and powerful enough to make a statement and to raise questions.”

HuffPo UK reports that the photos were shot by one of the project's directors, Tomás Peña, in and around Barcelona with his iPhone in a single day (You can see the stills appear in this video posted by Manson).

Peña told BBC Trending that he didn't think everyone would be fooled by the account. "We thought it was ironic to see him using hashtags like #RichKidsofInstagram," he said to the BBC.

Ready for everything. Prepared for the new experiences. #newlook #swag#haitdos#beautifull#mua#hairstylist# A photo posted by Abdou Diouf (@abdoudiouf1993) on Jul 21, 2015 at 2:56pm PDT

The superbike for the first stage. I don't know what will waiting for. Problems tears and cold but now im positive my friend hagi take me to nouadhibou. #ontheroad#travelgram#jujuy#nicetime#discover#explore#instagood#instadaily#exploremore#backpackers#adventure

The las meal from my mother. This travel is to help Her too old to work. #yummy #foodporn #foodgasm #bestchoice #dish #foodie #tasty #delicious #eeeeeats #hungry #foodpic #getiubelly

Two days walking. The guide Says we cant stop. Or we will lose two Thousands euros i pay for the boat to cross. #backpacking#nature#hiking#friends#instamood#instafollow#bored#instagood #instadaily #travelgram #tired #instagramers A photo posted by Abdou Diouf (@abdoudiouf1993) on Jul 22, 2015 at 3:33pm PDT

Hiden in the back of a trunk. Tryng to cross the border. No air. My legs Hurt. Wish me luck. #trunk #nospace #fear #thirsty #hide #borders #instadaily #instafollow # neverendingtryp #daydreamer A photo posted by Abdou Diouf (@abdoudiouf1993) on Jul 23, 2015 at 1:45pm PDT

Thermal blankets before going to the center of internment. They call it cie. Not a good place to stay. #gold #fashion #instadaily #painnogain #thisiseurope #europe #nodreamineurope #instamood #photooftheday #photochallenge #getxophoto #picoftheday #nature #friends A photo posted by Abdou Diouf (@abdoudiouf1993) on Jul 29, 2015 at 3:12am PDT