The Diaspora Wars of 'She's Gotta Have It' 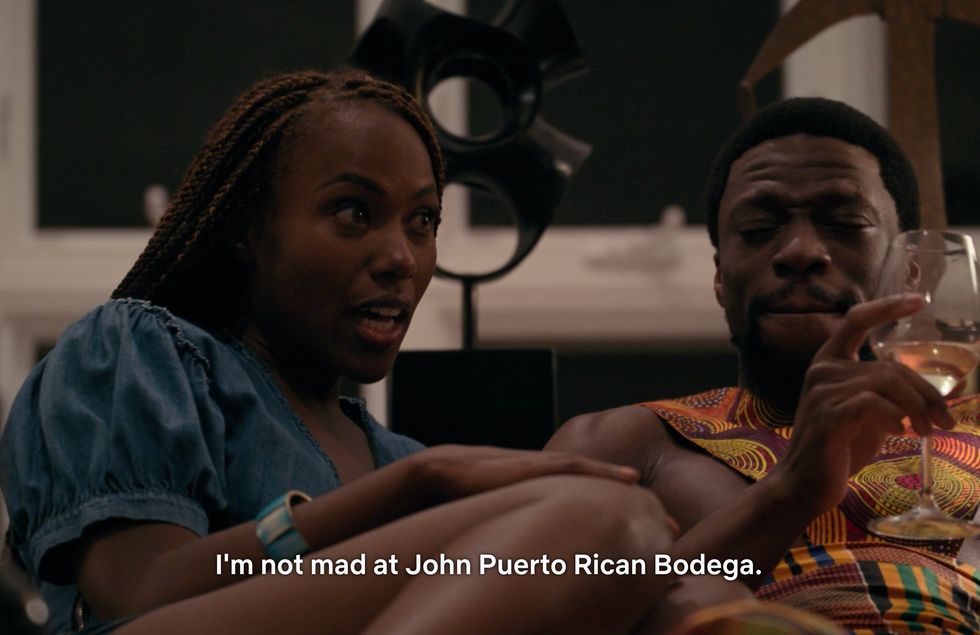 In this op-ed, OkayAfrica contributor Shamira Ibrahim analyzes the heated debate that ensued around the "#SuperFunkyCaliFragiSexy' episode on Spike Lee's 'She's Gotta Have It.'

British actors are "taking all of our roles" says Nola Darling to Olu, her British-Nigerian love interest in the latest season of She's Gotta Have It (#SuperFunkyCaliFragiSexy). "We have dope, talented, trained, qualified, black actors right here in the States—and at the end of the day, Black Brits just come cheaper," she continues, echoing Samuel L. Jackson's real-life commentary on the subject.

In response, Olu argues that Black Brits are "free of the psychological burden" of slavery and Jim Crow, prompting Nola to inform him that he "just [has] Stockholm Syndrome and fell in love with your captors"—but not before explaining the basic facts of British involvement in the Transatlantic slave trade.

The backlash from the Black Diaspora in the United Kingdom was swift: Nola Darling's sentiments were an insult to the experience of Black Brits. While a fictional character's problematic views don't necessarily reflect their creator's feelings, when taken to task for the clip on Instagram, Spike Leeresponded with a brusque "Truth Hurts?".

The scene frames the British character as the villain in the interaction—"how can someone so gorgeous be so ignorant?" Nola asks. It's an odd premise considering recent political history in the UK. Events like the fire at the Grenfell Towers, the Windrush generation scandal, and the ongoing Brexit debacle are all clear indicators that the modern Britain, like the US, has not shaken free of its white supremacist foundations. And why would Black Brits be "unburdened" by slavery when a large proportion also descended from chattel slavery? Given this clear misrepresentation, it's understandable why someone like John Boyega would push back. In the exchange between Nola and Olu who is truly the ignorant one?

In a review for the initial season of She's Gotta Have It, writer Zoe Samudzicriticized the show's inauthentic feel and stilted dialogue, noting that "the result is an inorganic character constantly uttering strained, overly witty Gilmore Girls-esque banter…who feels detached from actual experience and conversation, living in a purgatory between 1986 and now." In a series that strove to recapture the boldness of the original film's perspective of modern Black women's sexuality and life in Brooklyn, it fell short in both accords, settling instead for a paint-by-numbers plot update tethered to a facsimile of the original story, anchored with overwrought vocabulary that lacks the cadence of a genuine conversation between peers.

Season 2 continues on that note, unbound by the parameters of the original source material—resulting in a chaotic string of episodes composed of curious extended asides and plot contrivances used to make unwieldy points on gentrification, queer relationships, artistic expression and exploitation, self love, classism, and Black diaspora relations. With the latter, Lee tackles the subject with the precision of a sledgehammer.

Unfortunately Nola and Olu's tête-à-tête derails any opportunity to properly examine the ability of Black British actors to take on and do justice to roles for Black Americans. The controversy flared recently with the backlash to Cynthia Erivo's casting as Harriet Tubman and Samuel L. Jackson's comments on casting patterns in which he inaccurately described Britain's relationship with interracial dating. These nuances should be explored—but without projecting other groups' experiences, or using language akin to xenophobic tropes.

Can't lie, the deliberate mispronunciation of their names doesn't sit right with me. Not only childish but I think… https://t.co/ZXmxNDsHWr
— Ade Onibada (@Ade Onibada) 1559037646.0

There are multiple threads at play. Hollywood remains the West's largest film industry with significantly more roles available for Black actors, prompting more Black Brits to cross the pond; and with the United Kingdom education system investing in arts training at a rate that far exceeds the scope of the States, casting agents are known to openly fetishize the "pedigree" of the British imports. This tends to come at a higher cost to Black Americans due to the more limited availability of top-billing roles intended specifically for Black actors.

All of this manufactured scarcity is, of course, due largely to white production companies and various other gatekeepers. As we work to build our own platforms and tell our own stories, it's prudent to explore what equity in representation looks like in race-based casting and how we can work to expand the pool of available significant positions for Black people in the film industry on either side of the Atlantic and on either side of the camera.

It was especially jarring that Nola and Olu's argument was further undercut by choosing to mispronounce the names of Chiwetel Ejiofor and John Boyega, an anti-black trope, and turning Olu into an incoherent mishmash of West African identities—a British Nigerian with a Yoruba name claiming the Fulani tribe while casually donning Ghanaian Kente regalia.

In an ironic twist, Nola's character searches for clarity by tapping into Yoruba spirituality during a trip to Puerto Rico, failing to acknowledge the sources that she was previously so dismissive of. She is identified as a daughter of Oshun (an orisha made globally infamous after Beyoncé'sinterpolation of Yoruba iconography in Lemonade).

The present-day African diaspora is more connected than ever, and nowhere is that more evident than modern-day Brooklyn, home to a large Caribbean population, the West Indian Day Parade, the Museum of Contemporary African Diasporan Arts (MoCADA) and other Black cultural institutions. This past Memorial Day Weekend, the streets of Spike Lee's beloved Fort Greene were littered with BAM's annual celebration of African Identity, creative expression, and performance, DanceAfrica, as well as newly established diaspora traditions like Everyday Afrique. By failing to recognize the rhythms of the borough, Lee reveals just how removed he is from the particulars of the experiences of day-to-day Black Brooklyn life, and he is only doing himself and the show a disservice by allowing the show to be dominated by his voice and direction.

As Black creatives continue to tell the stories that we find important, their impacts and themes tend to resonate broadly. It's why Roots was a phenomenon that aired not just in the US but in Europe, and the story of the Haitian Revolution is universally recalled as one of Black self-determination and insurrection. That extends to marketing: BlacKkKlansman, for example, was an American story that Lee made efforts to connect with Black British audiences, similar in logic to the targeted global campaign that Marvel engaged in for Black Panther.

Engaging in the labor of storytelling is not a tradition of exclusivity; it's one of exchange and collaboration, as long as all parties arriving at the table have entered into a safe space of mutual respect and understanding. It's a loss for us all when a new piece of Black work fails to understand that framework.

Shamira Ibrahim is a Brooklyn-based writer by way of Harlem, Canada, and East Africa who comments on culture, identity, and politics. Keep up with her on Twitter.