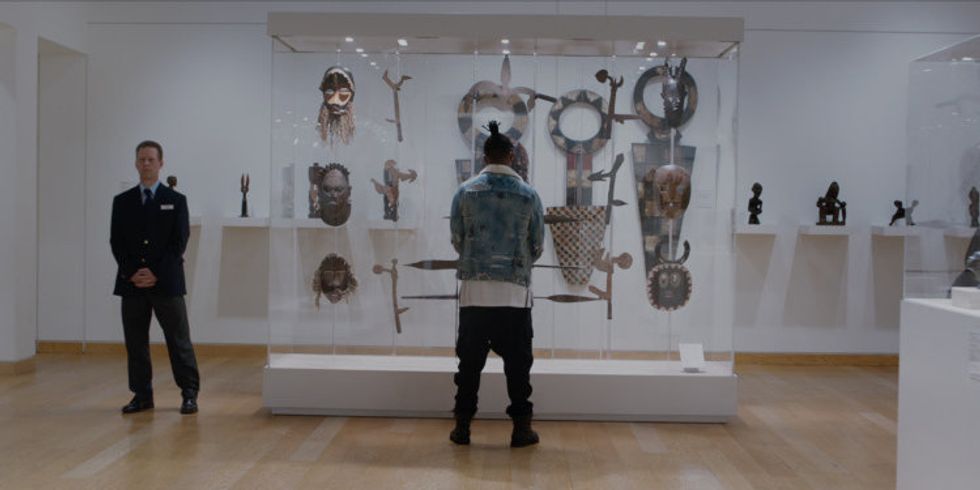 We speak to anthropologist and curator Niama Safia Sandy about the politics around the repatriation of African art.

Earlier this month, the Victoria & Albert Museum in London responded to a claim by the Ethiopian government to retrieve items taken from the 1868 battle of Maqdala by suggesting that Ethiopia take them out on a long-term loan. The items, which were taken from the mountain capital of Emperor Tewodros II in the area formerly known as Abyssinia, include a gold crown, a royal wedding dress, the bones of Prince Alemayehu, Emperor Tewodros II son who was captured and taken to Britain where he died at just 18, and more.

The audacious suggestion that the items be "loaned" back was a clear disregard for cultural ownership, a reinforcement of colonial attitudes that once again stripped African countries of their culture and agency.

The outrage that ensued was no surprise, but as we know, outrage isn't always enough to get things to change. It's also useful for those of us, whose history has been ravished by Western dominance to explore ways to reclaim it, to take by what's lost. This month as we commemorate the 150th anniversary of the end of the Battle of Maqdala, it's a fitting time to think about solutions.

We spoke to Brooklyn-based cultural anthropologist, writer and a founding curator of the Southeast Queens Biennial Niama Safia Sandy about the history of the battle, the politics of repatriation—the returning of art or cultural heritage to their country of origin—and what institutions should be doing to combat the widespread issue. Read what the expert had to say below.

As a black anthropologist and curator, how did you feel hearing about the UK's suggestion that Ethiopia take the looted Maqdala items on a long-term loan?


Sadly, I was wholly unsurprised by the Victoria & Albert Museum's stance on returning the relics to Ethiopia as long-term loan. As much as it is mind-boggling that artifacts —both religious and other items—that are known to have been pillaged, it is par for the course. The Victoria & Albert Museum's position smacks of the hubris produced by white hegemony and centuries of imperialist attitudes. Tristram Hunt's supposed "philosophical case for the cosmopolitanism" in the nature of museum collections is totally undercut by virtue of the fact that the items were stolen. Furthermore, they were stolen from places that have a tremendous amount of cultural and spiritual importance to Ethiopians.

Provenance, the method in which an item was acquired, matters. Let us not forget the "Abyssinian Expedition of 1868," from whence the majority of these artifacts came, was essentially a campaign to put Abyssinia (as Ethiopia was known then) in its place. They brought nearly 40,000 British and Indian soldiers and logistics personnel, and almost 30,000 animals including elephants to Ethiopia to retrieve about a dozen people being held by Emperor Tewodross II. Tewodross II is the first modern ruler to unite the many kingdoms of Ethiopia, hence the title negus negast or "King of Kings." He was the first to make efforts to modernize the country. They wanted to make an example of Abyssinia and show the might of the British Empire. The British military literally burned his entire citadel to the ground, but not before desecrating his body, the place he worshiped, and pillaging the entire village of Maqdala. Today there is still a lock of the Emperor's hair in the Imperial War Museum.

In the context of all of this, it is inconceivable that a reasonable person would suggest a "long-term" loan. Ethiopians, including Emperor Yohannes I and citizen groups like AFROMET (the Association for the Return of The Maqdala Ethiopian Treasures), have been rallying to return these items for over a century! The Victoria & Albert Museum isn't even the only place that has them.

What are some of the politics behind artifact repatriation? What is preventing institutions from simply handing items back?


This, and many other things in the museum world, is about power. The thinking for leadership at museums and heritage institutions is "if we return this country's artifacts, we'll have to return that country's artifacts" and it is basically a matter of blood in the water. What is to stop every country in the world outside of the West from requesting their cultural artifacts back? I agree that a fully inclusive and cosmopolitan view of the world's histories and heritages must be shown and preserved but the manner in which the items are procured really should be considered.


To your knowledge, how has this issue been addressed in the past? Can you name any examples in which repatriation has worked and items were successfully given back to their home country?

In the past museums have returned artifacts. As it relates to the Maqdala relics, some of the objects have actually been returned. While visiting London, in 1924, Ras Tafari Makonnen, the future Emperor Haile Sellassie, was given one of the two crowns in the British Government's possession as a gift to the then-ruler, Empress Zawditu. Ironically, the one that was left behind is the gold crown currently on display at the Victoria and Albert Museum. In 1965, when Queen Elizabeth visited Ethiopia she presented Emperor Selassie with Tewodros' royal cap and seal. As of last year, the British Museum is in talks to return Benin City bronzes to Nigeria and Benin. In 2015, several US museums turned over dozens of stolen Indian artifacts sold to them by an antiquities dealer.

Do you have any suggestions for a realistic solution to the issue of artifact repatriation?

The best practice is to evaluate the circumstances under which the items came into the institutions possession. If equity and upholding real histories is the true goal then showcasing objects that were obtained under questionable methods is out of the question.

Niama Safia Sandy is a New York-based cultural anthropologist, curator, and essayist. She is an alumnae of Howard University, SOAS, University of London, and the No Longer Empty Curatorial Lab. Niama is a founding curator of the Southeast Queens Biennial which debuted in 2018. Her curatorial oeuvre includes multiple ongoing exhibition projects with internationally renowned art institutions. Niama has convened panels, led discussions, and presented papers at Prizm Art Fair, the 2016 Creative Time Summit, the 2017 Midwest Art History Society Conference, and Black Portraiture[s] 2018 at Harvard University. Sandy recently contributed the preface, "Love ex Camera," to the first edition of MFON: Women Photographers of the African Diaspora, a publication highlighting the work of over 100 black women photographers from all over the globe.