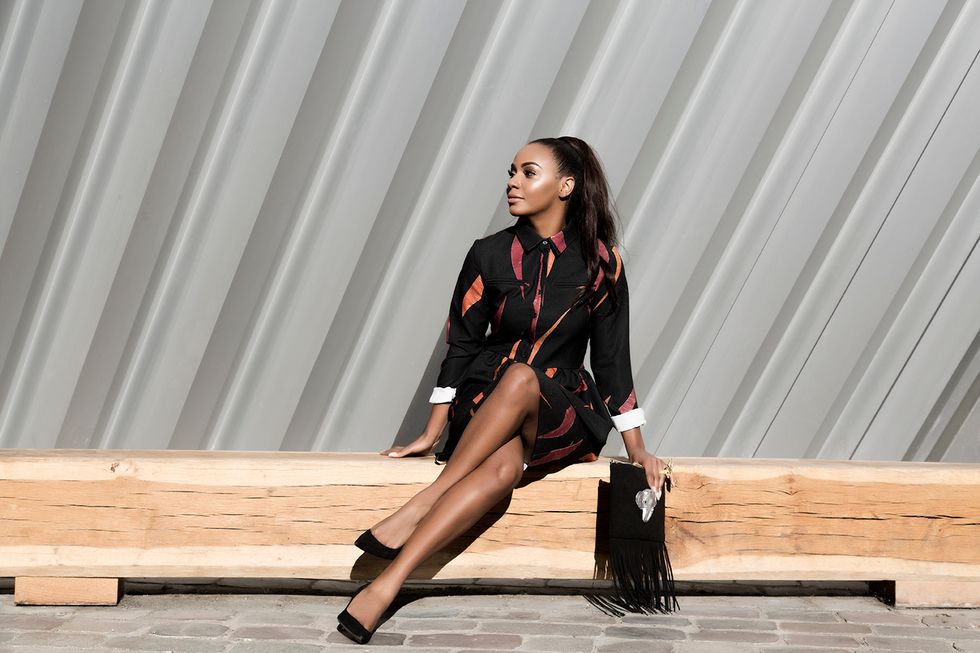 Our third feature in this four-part series highlights Vanessa Azar—the Cameroonian beauty blogger and businesswoman who does it all.

"The Influencer's Insight" is our four-part series for April's theme "The Hustle." The series features women content creators who've achieved influencer status through their social media platforms. These influencers will give their insight on how they built their brand, challenges they've faced, influencer marketing tips and more.

Vanessa Azar is the Cameroonian-Lebanese beauty content creator behind her blog, Vanessa's Secrets.

What's her secret, you ask? Triumphing over two distinct adversities: the loss of her mother and a period of severe depression brought on by terrible bullying. The details behind the latter are reserved for a blog post she hasn't quite found the strength to write, but will certainly come with time.

At 31, the trajectory of her career is one she's been working towards her entire life. Azar shares that at age 7, she was gifted a Polaroid and documented her family's travels with a photobook. As a teen, she filled a journal. The internet wasn't a thing then, but when the boom hit, a Skyblog centered around a Gossip Girl-related theme came. Later, when she moved to France from Douala, Cameroon, she opened a private blog for her sister in Canada and a friend in Florida. She made it public out of curiosity and it was viewed by 80 eager followers. At 23, she was hacked and from a year of darks days, came an understanding of how important it is to be happy to have a notable beauty blog.

A scar remains, but the way in which she's managed to control her narrative is worth noting. Describing to us what a typical day looks like, Azar wakes up early to do her hair and makeup for an hour, shoots for a brand, changes her clothing to attend a press event for the launch of a product or magazine and returns home to gossip on Skype about anything and everything outside her blog. It's no surprise that behind the glitz and glam is a simple girl who wears no makeup or heels, is down to earth and typically found in her pajamas.

She's come a long way. In 2013, she was a writer for France's notable Stiletto magazine. A number of the companies that would come to her would be from the relationships she formed while working there. The first was a cream brand and later, Estée Lauder would come knocking. Her hustle was comprised of emailing brands at the start of her career but at this stage, they reach out to her.

Brands like MAC, Jo Malone, Mizani, L'Oréal and Chanel have sent her an arsenal of nail polishes, fragrances, mascaras and foundations. The beauty has a penchant for timeless products that work and have for years thereby straying away from trends. The Estée Lauder group holds a special place in her heart because of its social aspects and support of women from all walks of life. She's even spearheaded an initiative selling their products to use the profit to assist a school. "[I blog] to change how brands portray us and how we can impact the industry," she says candidly.

As you could imagine, Azar has faced some challenges. "French brands are crazy for a 'certain' black image; darker with bigger lips. They want one person to represent us all," she says. "Brands don't know what to do with relaxed hair or the many different tones of black women." This firecracker plays no games when it comes to advocating for her own. She attended a Clarins event in which she was one of only two black people there, and responded by sending them a harshly worded letter about their lack of representation and shades available at their makeup stations. The result of this act was rewarding, to say the least. The brand took heed and expanded the shades they had available across their product lines. In a day and age where black women account for a large portion of profit for beauty companies, we should always be regarded. Individuals like Azar should be applauded for speaking on our behalf in spaces where there are less of us.

We also discuss pay, another hurdle. Where some companies have a strict budget they adhere to, others pay white bloggers in Europe more than their black counterparts. When negotiating, Azar inquires as to the criteria being used, like followers, engagement and experience.

She's also passionate about her home country and the broad narratives available to us. "We have a strong heritage and stories we should lift. I want to show how it looks like to be an African woman my age living, working and blogging," she says. Azar's sought and collaborated with brands from the continent for free just to give them exposure they may not be afforded another way. In Cameroon, she created a sandal with the designer of Shoes by Vidal. When attending last fall's Heineken Lagos Fashion and Design Week, she dawned the designs of Style Temple, Grey Projects, Mazelle Studio and House of Izzi. More recently, she can be seen slaying in Andrea Iyamah and Tongoro Studio.

She's currently based in Lagos working as a project manager for Trace Nigeria and has her sights set on working with Marc Jacobs, Guerlain, South Africa's Lulu & Marula and Skin Creamery, Nigeria's Epara Skincare and opening up a living, breathing beauty temple—home to dermatologists and a variety of products that work for women with melanin.

Azar laughs as she refers to her work as "passion pay."

"It's not a career when you are being paid to do something you love." She has always felt this way.