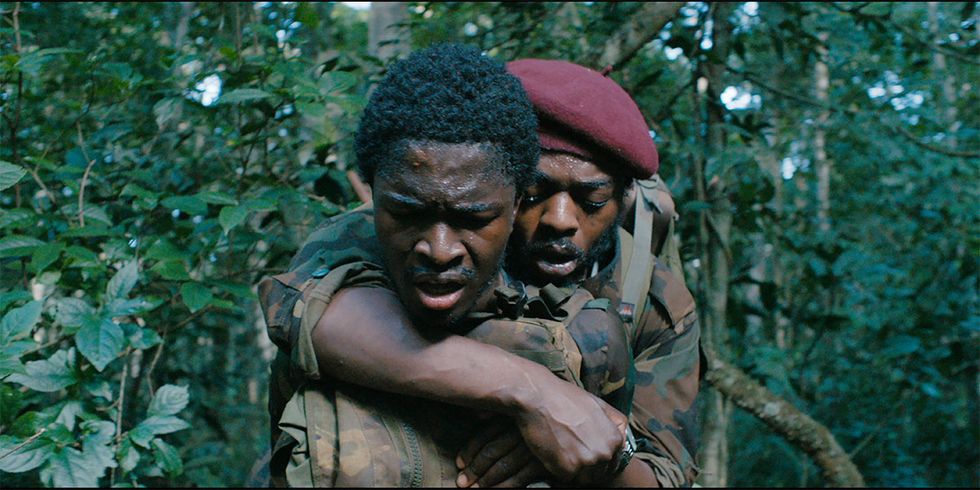 (From left to right) Stéphane Bak and Marc Zinga in 'The Mercy of the Jungle.' Photo courtesy of TIFF.

We catch up with the actor after the film made its North American premiere at TIFF.

When actor Stéphane Bak first got the script for The Mercy of the Jungle (La Miséricorde de la Jungle), he knew there was one person he had to consult: his father. "My dad did school me about this," he says. While Bak was born and raised in France, his parents had emigrated from what was then Zaire in the 1980s—before the events of the movie, and not exactly in the same area, but close enough to be able to pass on firsthand knowledge of the simmering ethnic tensions that underpin the action.

The story takes place in 1998, just after the outbreak of the Second Congo War—which came hot on the heels of the First Congo War. Two Rwandan soldiers find themselves separated from their company and have to make a harrowing trek through the jungle to link back up with their regiment. Bak plays Private Faustin, the young recruit hunting Hutu rebels to avenge his murdered family, a foil to Marc Zinga's seasoned Sergeant Xavier. As a Congolese militia swarms the area, and it becomes increasingly difficult to tell enemies from friends, the two are forced off the road and into the thick vegetation.

Their journey is physically difficult, but the jungle also nurtures them, providing food, water, and shelter. "The title is very explicit in a way," says Bak. It is the human beings they encounter, from rival soldiers and militiamen to the hostile security forces guarding illegal gold mining operations, who bring sudden danger and violence. The challenges are conveyed as much through the actors' physicality as through the minimal dialogue. As for the strain on his face, Bak says it was all real. "To be honest, it was very difficult," he says of the shoot, which took him 25 days. "I had to learn my accent in two weeks." Prior to commencing, there was training with the Ugandan army for realism. Due to the ongoing conflicts in the DRC, the movie itself was shot in Uganda.

(From left to right) Marc Zinga and Stéphane Bak in 'The Mercy of the Jungle.' Photo courtesy of TIFF.

The movie, a France/Belgium co-production, was shot on a shoestring budget, but doesn't bear the telltale hallmarks of cheap indie film making. The cinematography is engrossing, and the jungle itself provides an atmospheric backdrop that can be welcoming or menacing. Director Joël Karekezi is a native of Rwanda, and lost family members to genocide. His first film, Imbabazi: Le Pardon, was released in 2014. The screenplay for The Mercy of the Jungle was an official selection at Cannes in 2013, and at the Locarno Festival in Switzerland in 2014.

At 3,000 feet above sea level, it wasn't just navigating the terrain that posed a problem. "It was a jungle—I thought it would be warm," he says, recalling shivering in the cold. At one point in the story, the sergeant falls ill, and the private decides to carry him. The strain Bak portrays on screen is almost palpable. "He didn't help me at all. That was super intense," Bak recalls. "I was really suffering." As the difficulties mount, Faustin and Xavier can only rely on each other. Bak says that, through the director, he learned the script was based on real events.

Bak studied comedy from the age of 14, and the early start ended up serving him well. "I got kicked out of school, and I had to figure out what to do," he says. Comedy led to writing gigs and TV appearances, and eventually acting. He's got several features on his CV so far, including Paul Verhoeven's award-winning Elle, Sebastian Schipper'sRoads, and André Téchiné's Les Ennemis, among others. Bak visited Toronto in September for the International Film Festival, where, along with starring in the movie, he participated in the TIFF Rising Stars professional development intensive.

The TIFF Industry initiative brought together eight actors from all over the world who represent the next generation to watch out for on the silver screen. This year's cohorts came from the Kahnawà:ke MohawkNation, Canada, the U.S., Egypt, London, and Bak's native Paris, and each star in a film that premiered at TIFF. The program crams screenings, parties, and career advice into about four days. "It was very intense, but in the best way," says Bak. Days ran from 6am to about 3am, but it resulted in unique opportunities. "I got to meet my favorite director," he says of his impromptu meeting with Barry Jenkins (If Beale Street Could Talk) in the elevator. He also valued the advice from industry luminaries like Mahershala Ali and Canadian Indigenous filmmaker Tantoo Cardinal.

Next down the pipe, Bak will be playing a Congolese migrant searching for a long lost brother in France in a film that sees him working with German filmmaker Schipper again.

The Mercy of the Jungle had its North American premiere at TIFF, and opens publicly in France in October 2018, along with screening at the Festival International du Film Francophone de Namur in Belgium.