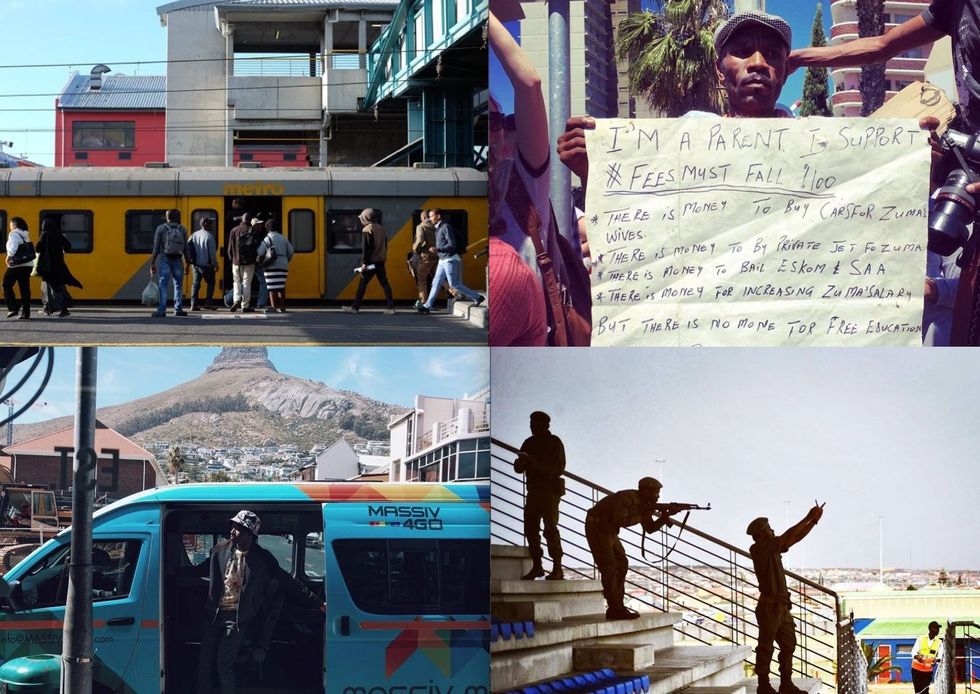 A protest moves through a street in Langa as people demonstrate over unsatisfactory housing conditions. Smoke plumes ascend to a blue sky as a car starts to burn soon after it has been stolen.

These scenes play out as Instagram images, offering largely untold narratives from one of South Africa’s oldest cities. Contrary to what some Instagram platforms might suggest, Cape Town is not all about a tabular mountain, late sunsets and pretty postcards. A motley crew of dedicated Instagrammers are attempting to tell “alternative” stories encompassing the diversity of the socio-economic strata, where we might get a glimpse of the beauty and complexities of the real city.

Aptly named The Real City of Cape Town, the Instagram-based project, consisting of several photographers from differing backgrounds, ages and races, runs a thread between the people, concrete, colours, skylines and other spaces that make up the city and its radiant contradictions.

An inequality exists in Cape Town that harkens back to the old country. Imbalance buttressed by urban planning ensures that privilege continues to protect the privileged (read: White) and that the city of postcards, tourism awards and global quality of life indices continues to thrive at the expense of many. This one-sided aspect of Cape Town is further emphasised by accounts such as the The City of Cape Town. This project was created as a reaction to that, says contributor Barry Christianson.

“One evening over drinks, a friend and I ended up browsing through The City of Cape Town Instagram feed. We scrolled through a hundred photographs and all we saw were pictures of nature, people enjoying nature, people looking at nature… and all the people were white,” says Christianson. “For good measure they threw in a picture of some coloured kids on an ‘instawalk’ poster, suggesting they were part of nature.”

Fellow contributor and recent Caine Prize winnerLidudumalingani concurs. “The popular visual narrative of Cape Town, mostly framed by the lens of the tourist, the European expat and the kind of Capetonian that has not tossed an eye further their own garden, has always been not only problematic but hugely deceiving.”

The project responds to the “single story narrative” Chimamanda Ngozi Adichie warned of, says street photographer and contributor Leanne Brady. After traveling to Sierra Leone, where she worked on a photo series, #morethanebola, Brady returned to Cape Town and was concerned about how the city was not getting a more accurate representation.

“I wanted to carry on taking pictures, and was interested in being part of a group that captured the multiple and complex realities of the city,” she says.

In July, the photographers took their images from cyberspace to hard copy by way of a group exhibition, in which the featured prints were put on sale to the public. The exhibition was also an opportunity for some of the group members to make contact and discuss “the paradox that is Cape Town.”

It was there that many of the contributors met for the first time—a full year after the project began.

Iqraa Daniel, a street photographer, writer, Matric student and contributor to the feed, is drawn to the flux Cape Town is undergoing as the country begins to “reclaim” the city.

“Cape Town stood motionless in some dark decade, like some beautiful actress placed on a pedestal too high for most to reach,” says Daniel. “That is changing now. Small farmers are working in the CBD and the restaurants are no longer dotted only with white faces.”

No city is one thing and its inhabitants each have a different experience of it. In a country like South Africa where race permeates all levels of society, a country where gender is so topical it no longer make sense to have a one-dimensional view of any constructs in the country. While the feed may not represent all of Cape Town, as Christianson says, it’s showing new images that may challenge how the city is defined visually.