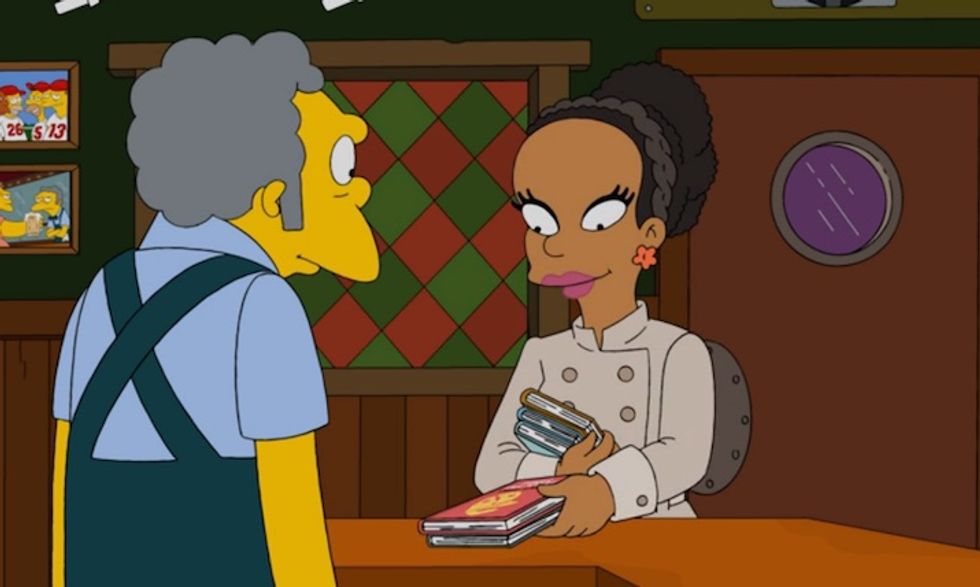 In a recent episode of the The Simpsons, Homer is charged with looking after a Nigerian princess named Kemi (voiced by Mother of George actress Yaya Alafia) while her father and Mr. Burns discuss a uranium deal. Beyond the obvious jabs at Nigerian 419 e-mail scams, one of which Moe falls for, the episode largely steers clear of negative stereotyping and focuses on Princess Kemi's introduction to life in Springfield.

As a token of Princess Kemi's gratitude to Moe for serving as her guide during a tour of Springfield (soundtracked by King Sunny Ade's "Eni Binu Wa") she gifts him with, as she describes it, some of Nigeria's "most beloved, albeit depressing literature." The four books selected by Kemi come from literary luminaries Ben Okri, Chinua Achebe and Chimamanda Ngozi Adichie, and include Adichie's 2009 short story collection The Thing Around Your Neck, Okri's Booker Prize-winning The Famished Road, Achebe's seminal work Things Fall Apart and his essay collection Home and Exile.

For more essential writings from African authors, check out our list of reader recommendations we compiled in celebration of World Book Day in the UK and Ireland earlier this month. Watch Nigerian literature invade The Simpsons in "The Princess Guide" below.