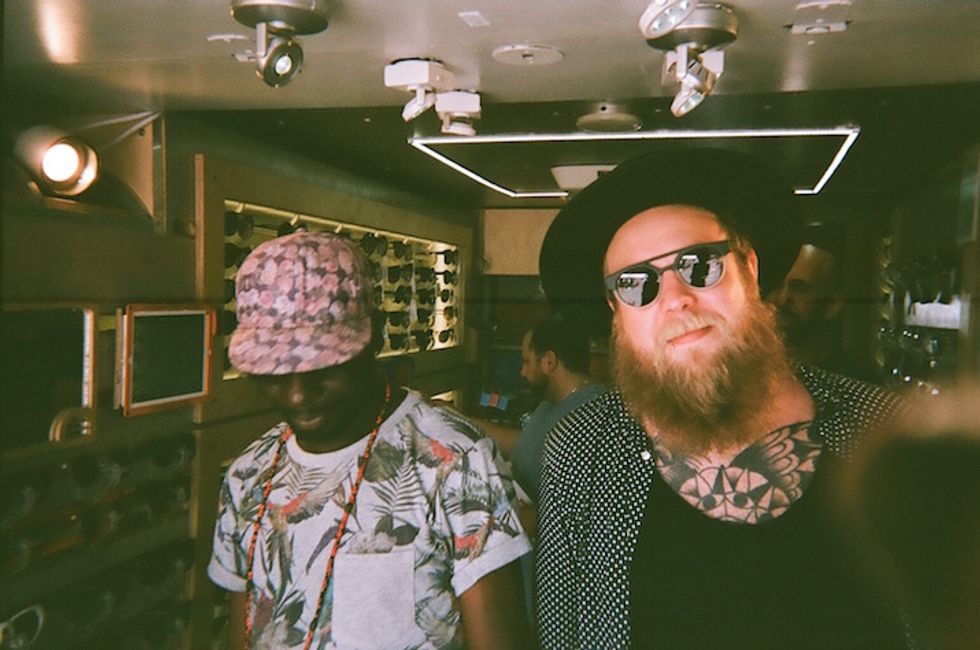 Malawian singer Esau Mwamwaya and producer Johan Hugo, better known together as The Very Best, have been on the road for the past months in support of their third album Makes A King. Okayafrica recently handed the duo and their band a batch of disposable cameras to document the American leg of their tour as they made their way over to New York City. Browse through The Very Best's tour pictures in our gallery above — look out for cameos from Saul Williams, Vampire Weekend's Ezra Koenig, Heems (formerly of Das Racist), and band member Seye — and read ahead for our interview with Johan Hugo about the influence of Malawian politics on the new songs, collaborating with Vampire Weekend's Chris Baio on the LP and tour life.

Okayafrica: There's several political themes running through Makes A King, how did the politics of Malawi influence the album's songwriting?

Johan Hugo of The Very Best: It's true there's been such political influence to this album especially in the song "Hear me" which is a song that doesn't only showcase the beauty of Malawi as a country but was also composed almost exactly at the same time when Malawi was celebrating its 50 years of independence. The introduction of the song itself is the voice of the ex-president speaking about what Malawi has achieved over the years and her statement indicates that it hasn't achieved as much as it would have. There was and is still a scandal of government funds been misused by some civil servants which is one of the reasons why Malawi sees itself as the poorest nation today. Hearing her speaking about this we thought it was necessary for us to sing something about it, knowing that this is one of the biggest challenges this nation has been facing for so long especially after [the] multi party system of government came into power.

OKA: In terms of the production, what were some of the influences on the album's beats and instrumentation? It sounds like you guys used more live instruments this time.

JH: We wanted to have more live instruments. just generally make it more organic on this album. we really wanted a band to be able to play the songs live. We even rehearsed a live band in Malawi for this USA tour but in the end we couldn't afford to bring them. But yea it just felt like the next natural step. Recording the album outdoors and adding a lot of real instruments... [adding] a lot of local musicians in Malawi where we recorded, choirs etc. and then adding extra live instruments in London.

OKA: Tell us about the experience of recording in Malawi's M'dala Chikowa village. What was the set up like? What was your day-to-day like while you were recording?

JH: It was pretty minimal. just laptop, a interface with a lot of inputs, a few mics.. just trying to record as much stuff as possible, people coming by the house with their instruments wanting to get involved. Recording as much as possible outdoors to capture the surroundings and nature. Women washing their clothes in the lake in the day time and crickets etc at night. It was really a magical house to record in. We're trying to go back there... The thunder that was rolling in over the lake from Mozambique =) … it was such a peaceful place. no internet, no phones. Just left alone to be creative.

The Very Best "Hear Me"

OKA: How did the collaborations with Vampire Weekend's Chris Baio come about?

JH: We obviously know the Vampire Weekend guys since way back making "Warm Heart of Africa" with Ezra and touring with them. Chris Baio came to Malawi with us a few years ago for Lake of Stars festival too. He lives in London now so after we finished recording and I was back in London finishing production I asked him if he wanted to play bass on a few songs and he was keen, so he came to my studio in London and did it.

JH: Being able to see peoples reaction to our songs is amazing. Specially the new stuff we haven't played before, obviously. It's just a crazy experience of playing shows, meeting amazing people and having fun. And a lot of driving and feeling like we haven't slept enough for a long time. It's tiring =)

OKA: What's the best part about touring in America?

JH: America has always been good to The Very Best. People are super lovely and supportive of our music which is amazing. It's the only reason we can even do this. If it wasn't for the people coming to the shows and supporting the band we could never afford to do this. Also america is soo big, so you get to see so many amazing places.

OKA: Favorite U.S. city to play in and why?

JH: That's hard to say. There's so many amazing places. We love playing festivals the most, our music was made for festival stages and outdoors and good vibes. But we don't really have a favourite place. As long as people are up for dancing and having a good time with us its amazing. And so far on this tour every show has been that way so were very happy!!!