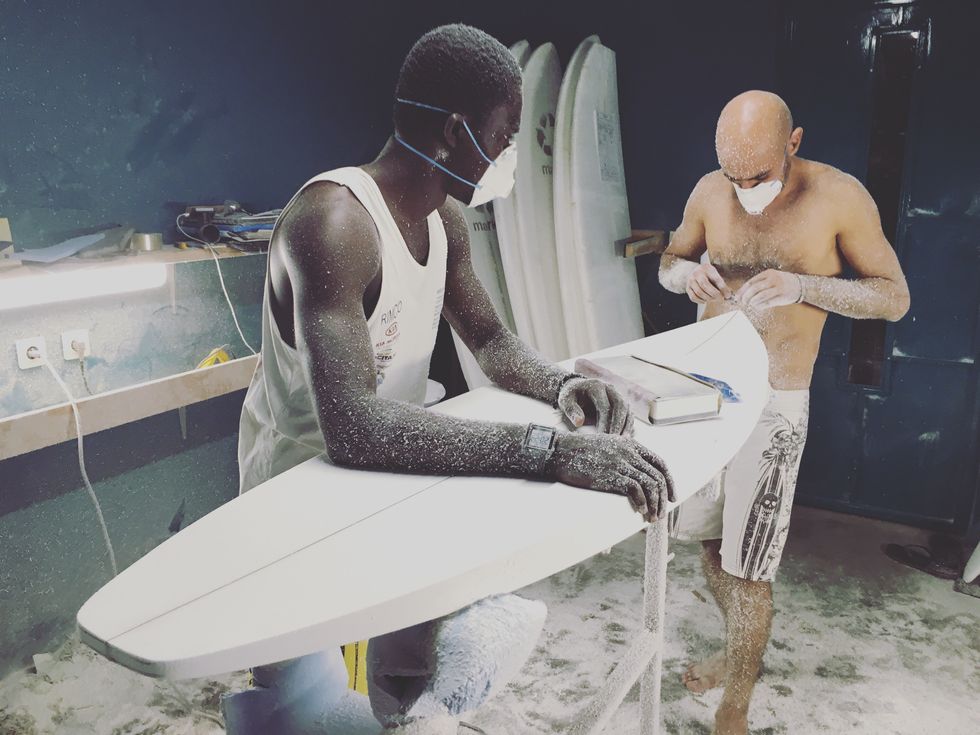 The West Factory hopes to grow the love of surfing the waves on the shores of Côte d’Ivoire.

Photo courtesy of The West Factory.

The world’s surfing population is growing fast. Between 2001 and 2011, the number of surfers increased from 26 million to 35 million. Serious surfers seek the right amount of wind and wave, and uncrowded beaches. Africa, with over 26,000 kilometers of coastline, can help meet that demand.

Some of the continent’s best surf spots in North and Southern Africa are well known to surf lovers worldwide, but the waves in West Africa are still underexplored.

Beydoun opened The West Factory, a new surf workshop in Abidjan, Côte d’Ivoire, which serves as a work space for shapers and a local center for the Ivorian surfing community this April.

He grew up in Abidjan before decamping to Lebanon following a coup d’état in Côte d’Ivoire. After moving to Australia for university, he developed a passion for surfing. “As soon as I got to Australia, I had wanted to learn how to surf because it’s such a big part of the culture,” he says. “I went to different surf camps and shops to learn more about the sport. When I first got into it, I loved the sport so much that I immediately thought: ‘I need to bring this to Côte d’Ivoire.’”

Ready for the comp this weekend ? #surfafrica#ivorycoast#assinie A photo posted by The West Factory (@thewestfactory) on Mar 3, 2016 at 4:47am PST

Located on the Gulf of Guinea, Côte d’Ivoire has 515 kilometers of southerly facing shoreline. Azure waves from the South Atlantic break along the country’s white sand beaches, nestled between coconut trees and pineapple plantations. Beydoun counts Assinie, the country’s most popular beach, and San-Pédro, as his favorite go-to places to catch a good wave. Despite the country’s natural beauty, the surfing culture is still young. “It’s a small community made up mainly of Lebanese and French,” he says. “There aren’t that many Ivorian surfers yet, but they’re growing in number as more people get interested in the sport. At the moment, it’s primarily men, but at different surf camps and events, I’ve started to see more female surfers.”

Before moving back to Côte d’Ivoire in 2015, Beydoun visited Lebanon where he met Paul Abbas, a self-taught shaper. When Abbas began surfing, there were no boards in Lebanon—so he decided to make his own. Today, Abbas is the only person in Lebanon building surfboards from scratch on a large-scale. Beydoun approached Abbas about collaborating to build boards in Côte d’Ivoire. Although Abbas was initially hesitant, he quickly came around in the face of Beydoun’s passion and persistence. As the workshop launches this month, Abbas came to Abidjan for a month to help shape custom boards and train locals in the art of the surfboard.

We getting serious now #westafrican#shapingroom#madelocally#surfboard#surfafrica#teacherandstudent at #thewestfactory#thelandmark with @p_a_surfboards A video posted by The West Factory (@thewestfactory) on Apr 11, 2016 at 2:32pm PDT

“None of the boards in Côte d’Ivoire are made here—everything is imported. I decided to open a factory, a small workshop, to produce high-quality local boards made by local people at a lower price point,” Beydoun tells Okayafrica. If the demand keeps growing, The West Factory plans to recruit different shapers from across the world to make boards and teach a local team. Beydoun hopes that one day, The West Factory and its Ivorian staff will be able to shape their own boards. Currently, there are three different models available in every shape and color imaginable. Surfers can peruse The West Factory’s catalogue and opt for ready-made or custom-built boards.

Orange tinted boards ... What else ? #onlyatthewestfactory#westafrica#surfboard#yourstyle#yourdesign#bloodorange#custommade#abidjan#cotedivoire at #thewestfactory#thelandmark with @p_a_surfboards A photo posted by The West Factory (@thewestfactory) on Apr 15, 2016 at 8:12pm PDT

It's 4 am and I am jut sitting here glassing boards ? #glassingroom#sleepy#surfboards#factoryproduction#custommade#surfafrica#abidjan#cotedivoire at #thewestfactory#thelandmark with @p_a_surfboards A photo posted by The West Factory (@thewestfactory) on Apr 16, 2016 at 9:36pm PDT

As post-civil war Côte d’Ivoire begins to flourish again, greater domestic and international interest in surfing can help drive the country’s flagging tourism industry. As Beydoun builds the business, he hopes that The West Factory can help expand knowledge and support for surfing in West Africa, and change the image of surfing as a luxury Western sport.

“As we create an African surf and beach culture,” Beydoun says, “I want people to make their own boards and become independent of California, Australia and Europe, and I want to do it at a lower price.”