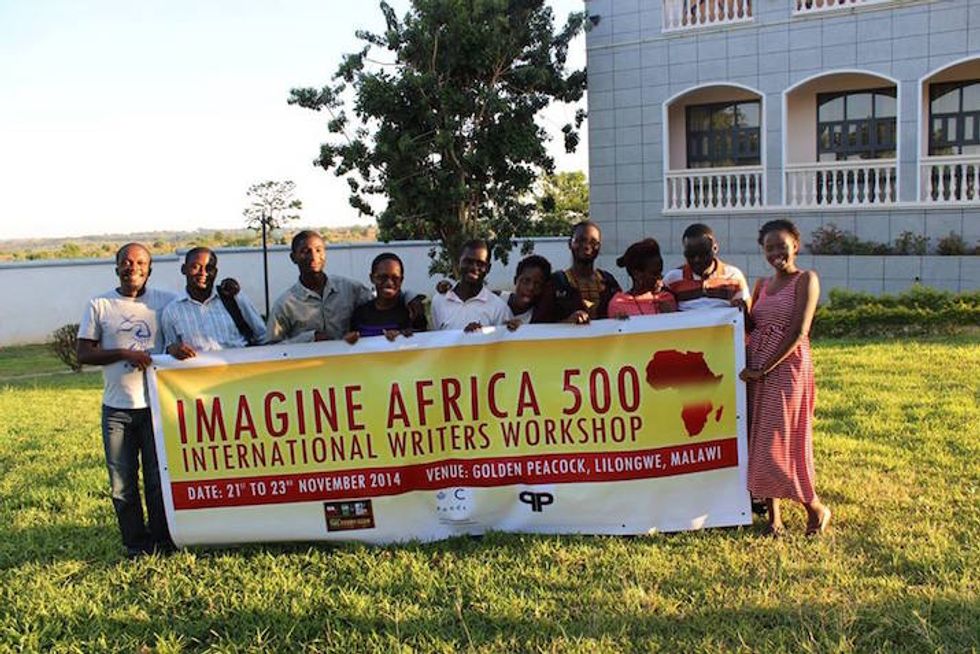 Malawian literature is on the rise. Chisomo Kalinga takes us inside the clubs propelling Malawi's writing scene.

It’s no secret that international readers love African literature. This interest has allowed the publishing culture to expand beyond narratives of disease, corruption, poverty and war—topics which have dominated representations of what it means to be African for a very long time. Today, African writers have the opportunity to diversify the image of the continent beyond those realities.

The visibility of Malawian writers compared to their contemporaries from Kenya, Nigeria, South Africa, and Zimbabwe is low. Regardless, writers in Malawi’s major cities—Blantyre, Lilongwe and Mzuzu—are organising themselves and taking part in a movement of literary clubs: informal gatherings to exchange, refine and enjoy local artistic productions. They function as a loose-knit association of clubs united by a common goal to promote local art.

Shadreck Chikoti, the author of ‘Child of a Hyena’, a short story in the Caine Prize anthology To See the Mountain and the forthcoming futuristic book Azotus the Kingdom, is just one of Malawi’s prominent writers organizing such gatherings. Last year, he was selected as one of the Africa 39 by the Hay Festival and Rainbow Book Club Project, which distinguishes the best African writers south of the Sahara.

He founded The Story Club as a place for artists, critics, dramatists, musicians, painters and writers in Lilongwe to discuss various approaches to storytelling and artistic representation. “We call our meetings congregations. For now, it just exists as a space. We don’t have formal membership so anyone is free to participate.” One of our motivations, he says, is “to engage with the readership as they ultimately decide what is good literature.”

These literary gatherings are not new to Malawi. In fact, one of the more notable clubs emerged from the halls of Chancellor College, University of Malawi—affectionately nicknamed Chanco. The Malawi Writers Group was formed in 1970 during one-party rule and produced the first collective of writers to attain international recognition. The objective of today’s writers’ forums is, by comparison, less political.

The Story Club is not just about sharing within the group but learning marketing strategies and technical writing skills from accomplished African authors. Tsitsi Dangarembga (Zimbabwe), Shafinaaz Hassim (South Africa) and Jackee Batanda (Uganda) are just several high profile African authors who have visited the club to share their knowledge on the art of African storytelling. Chikoti explains, “We bring in writers from all over Africa. They engage with the participants, they provide feedback and guidance on developing their storytelling craft. Our forum is interactive on different levels. We critique each other’s work. We are transcending cultural norms of mistrust and jealousy to rely on each other to shape and elevate African writing.”

The diversity of the artistic representations presented at the forums is also encouraging. While the Western publishing industry is witnessing the declining presence of poetry, the opposite is happening in Malawi. Paul Sezzie, a teacher and an organiser of the annual Land of Poets Festival, notices that there is a high demand for poetry forums in Blantyre where he lives.

Malawi, he says, has great potential to develop into a competitive poetic nation. He says that poetry appeals to Bantu Africans because its flexibility accommodates the aesthetic structure and musical nature of the prose that embodies traditional, African oral narration. “Our words for so many things across Africa are shared: madzi (water), moto (fire) and anthu (people). Poetry is a meeting point where we can connect with other African cultures and embrace the mutual respect for our oral indigenous customs.”

Sezzie is also a member of the Poetry Association of Malawi, which holds localized shows called Chitsinda Cha Ndakatulo (Swarm of Poems) at different venues across Blantyre. The gatherings became so popular that they needed a bigger venue to showcase more performances.

“We want our festival to become more internationalized where poets can recite in any language,” says Sezzie. “Currently, we have English submissions and representation from Malawi’s vernacular cultures. We want Zulu. We want Swahili. We want French. We want everyone to be exposed to more culture.”

Paul Sezzie performs his poem "In the Smokey Night" at the Land of Poets Festival in Blantyre, Malawi, July 6, 2015. (Photo by Chisomo Kalinga)

The need to engage Malawian literature with the rest of the world also became very apparent to Timwa Lipenga, a lecturer of French literature at Chanco. She united with her colleague Dr. Hendrina Kachapila-Mazizwa (History Department, Chanco) and Dr. Ranka Primorac (lecturer at the Department of English, University of Southampton) to create a forum for Malawian women on a digital platform. “Makewana’s Daughters,” Lipenga explains, “initially began because we wanted to know why Malawian women were not writing and what we could do to change this. But we discovered we were wrong. Women were writing but they kept these writings to themselves in their notebooks because there was nowhere to take their stories.” Creating an online literary forum enabled outreach to Malawian women to encourage them to engage in narrative expression.

Rhoda Zulu is someone whose growing success shows how important these forums are to supporting Malawian women writers. She is the Chairperson of the Women’s Desk in the Malawi Writers Union (MAWU) and has showcased her work with Makewana’s Daughters and the Land of Poets Festival. She also credits MAWU with providing her with skills training enabling her to present her work at competitive international forums. She too notes that more outreach is needed to promote Malawian women writers.

However, an unfortunate irony arose as many aspiring male writers wrote to the editors of Makewana’s Daughters to include their submissions, citing frustrations with the lack of publishing opportunities in Malawi. As it stands, it is currently the only high-profile literary journal in the country.

Lipenga is aware that more work is needed to support Malawian writers. “We don’t want to marginalize another group. But our original intention was to empower women. So I am working with my colleagues to create a new forum that will cater to both men and women. This demand shows that the website is making a positive impact. Malawian writers want good representation.”

Malawi’s last major literary journal, Wasi Magazine (1990-2009), was created and maintained by Professor Steve Chimombo exclusively and ended its run when he retired from academic life at Chanco. The lack of appropriate forums and avenues for writers still remains a critical issue for the survival of existing forums, which rely on their creators to stay afloat.

But new technologies are changing how people produce and distribute literature in Malawi. Sezzie acknowledges that people are not sitting around waiting for funding to roll in: “people are taking the initiative to make and sell their own CDs and DVDs to satiate local demand for literature. The commitment is there, the love for literature exists, and the market exists. But the infrastructure is not there to sustain it.” Lipenga also hopes that in an ideal scenario, Makewana will be able to expand its outreach to encourage more people to participate in a self-sustaining online platform. She says, “The forum should be about people who like writing and people who can mobilize more people to continue writing. The latter phase needs to be developed further.”

Malawi does not have a strong publishing framework to promote its indigenous writers. That means its writers rely on independent and/or external initiatives to promote local literature. In fact, the rising profile of Malawian writing in the 21st century can be attributed to one donor who single-handedly supported Malawian projects with external funding. Unlike Kenya and Uganda which have established writers’ forums such as FEMRITE and Kwani Trust, (organisations termed ‘literary NGOs’ by Doreen Strauhs), Malawi is relatively dependent on unstructured, external outreach to boost its writers into international visibility.

Rhoda Zulu is partaking in an innovative strategy to link Malawian writers with established forums in other African countries. In 2011, she was invited to Kampala, Uganda by FEMRITE to engage in discussions on how to promote African women writers. An outcome of this was the creation of a new forum called African Women Writers Initiatives Network. She believes that uniting Malawian literary groups with established organisations such as FEMRITE is an important strategy as many writers from that group specifically have achieved international recognition. Of this she says, “Donors are comfortable with funding Ugandan arts ventures because they are now well-organised and established. While in Malawi, efforts to promote women’s writing seem stagnant. Now we have learnt from these exchange programs on how to engage in this aspect of fundraising if Malawians are to develop a visible writing culture.”

Chikoti cites Crossing Borders, an influential mentoring programme organised by the British Council and Lancaster University in the United Kingdom, that linked experienced British mentors to bourgeoning African writers from 2001 to 2006. He says, “A considerable number of people who participated in this programme, including Jackee Batanda, have achieved international success as writers. It demonstrates that these programmes and forums can improve lives by encouraging literary spaces across the continent.”

In response to my question on what Malawian writers should do to improve their visibility within the global writing community, Shadreck simply offers, “It’s about making noise. That’s what we’ve been doing. And it’s working.”

Chisomo Kalinga is an academic, editor and writer currently based in Blantyre, Malawi. Her research and writing focuses on narrative accounts of health and wellbeing. Tweet her at @misschisomo.