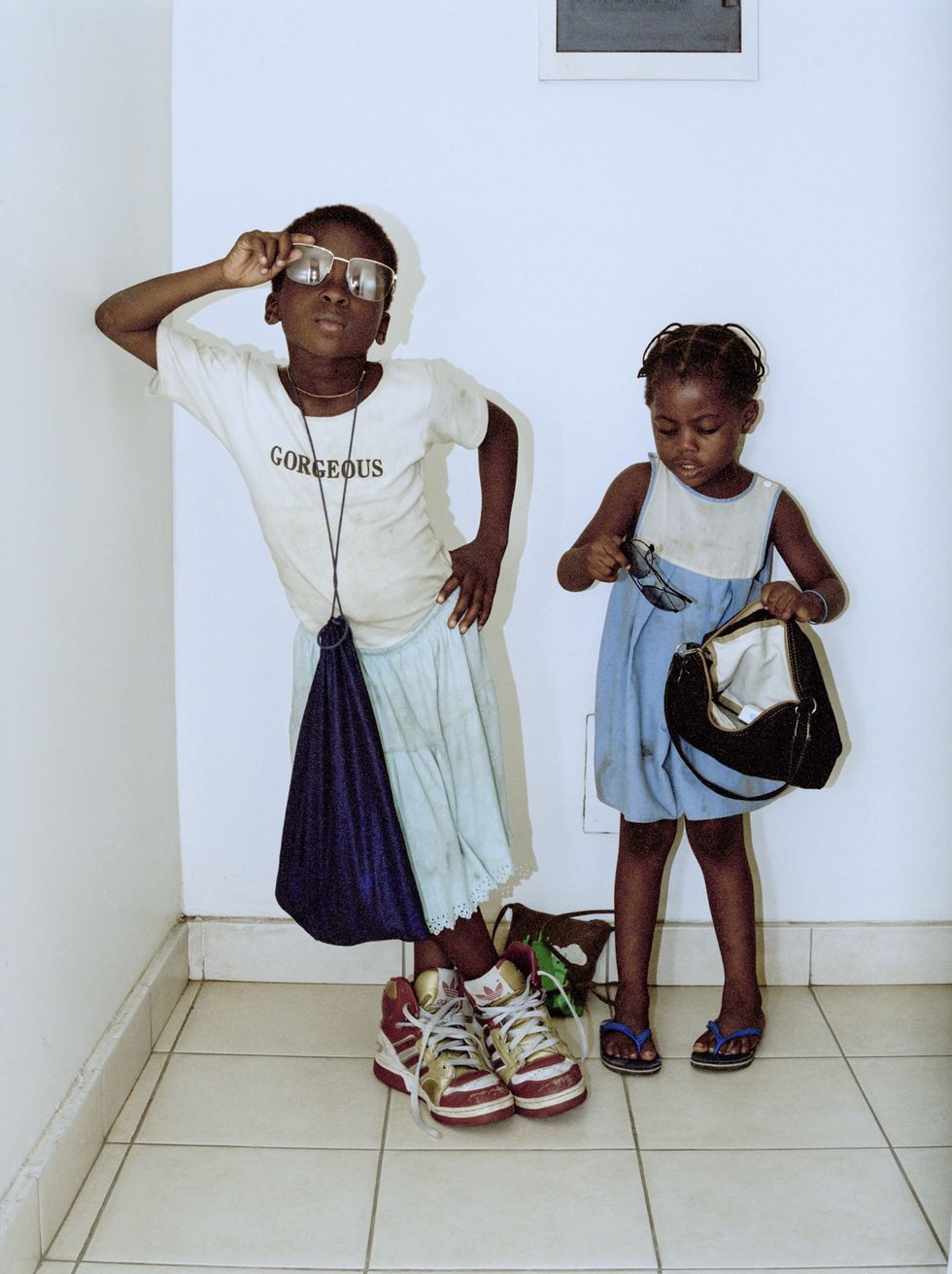 Flurina Rothenberger speaks with us about changing perceptions about life on the continent with her acclaimed photo book "I Love to Dress Like I am Coming From Somewhere and I Have a Place to Go."

There are photo books that just look good on the bookshelf—maybe you flipped through their pages a few times and then left them lying around to impress people coming over. Don't worry, we all have them.

But there are also photo books that look good and get even better the more you learn about their context and message. Flurina Rothenberger'sI Love to Dress Like I am Coming From Somewhere and I Have a Place to Gois one of those.

The book—issued by the Swiss independent art publisher Edition Patrick Frey—was named the most beautiful Swiss book in the year it came out. Its pictures show a mix of nature, landscapes, man-made structures, chaos and people. It captures street corners, dreamy sunsets, clay vessels carelessly standing around, kids looking confidently into the camera or romping on the beach, people posing, people sleeping, people on their phones. Just everyday life.

The articles on the book were positive and the press was in agreement: finally someone had helped clear up prejudices about Africa. But Flurina, born in Switzerland, but raised in Zuénoula, Côte d'Ivoire, is not interested in showing "the other" Africa just to prove people wrong. She cares about communicating the complexity of everyday life in Africa. The fact that outdated clichés floating around in the media happen to go down the drain as a result, is all the better.

We spoke to Flurina about her stellar book, her work as a photographer and stereotypes.

Your book was created from a huge ten-year image archive from various African countries. Why Africa?

My childhood has shaped me a lot and I realize that the older you get—I am 41 now—the more important these things from the past get. So many matters and memories lead me back to the Ivory Coast. I am currently relocating there, because the different African countries are all one big inspiration for photography. In everyday life there seems to be some kind of choreography, a kind of magic hand involved. For example, there is a green bucket standing somewhere on a street corner and next to it a woman waiting for her taxi and dressed just in the same color.

Is this your method of taking pictures? Are you looking for this magic of coincidence?

I always work very spontaneously when taking pictures, and in fact it feels like I see something I have to take a picture of every two minutes when I am in African countries. But I always get in touch with people, that's important to me. There is this moment between me and the subject—a person or situation—that triggers the impulse in me.

That sounds like a very personal approach. In the book, the photos are a mix of commissioned work by third parties and your own projects. Does that always go together?

Absolutely. The few pictures that are in the book coming from commissions are all stories that I have suggested and therefore I also see them as my own projects for the biggest part. For a long time, the topics I proposed met zero interest. This is changing at the moment.

Why do you think that's it?

Not only because the image of African countries in Western media needed and needs to change, but also the public reception. It sounds harsh, but people have to be trained to see things differently than just in their usual structures. There has to be a new way of looking at things and allowing facts to speak for themselves, in which the viewer becomes aware that he is re-perceiving aesthetics and thus developing himself.

Usual structures sound very much like clichés. Stereotypes, prejudices, misconceptions, these are terms that often come up in the context of your work.

I rather believe that most of my projects are set in African countries and therefore—it sounds extreme, but I think it's true—are always coupled with stereotypes. For me, cliché and stereotype are very stale expressions that have this negative connotation, as they always seem one-sided. But on the other hand, they also help us to orient in the world. I travel a lot and realized that everybody does it—all culture and societies have stereotypes.

What is then the problem with stereotypes?

I find it difficult that many are based too much on "either/or" thinking. Basically, one stereotype is always replaced by another. Also in relation to Africa: If I had to sum it up, the most annoying thing about the stereotypes about the continent is that it's always black or white. There is a lot of arrogance and ignorance when talking about Africa. It was no problem for people to reconcile stereotypes in every place in Africa I've been to. Life is just lived and many things work problem-free side by side.

Where does the "either/or thinking" come from in your opinion?

There is a big overload, with everything concerning the continent. Many—especially European—countries have a difficult relationship with their past, with the oppression of African countries, that they are still working on. When I look at how the African image in the media or the perception of my work has changed in the last 15 years, it is enormous, but the picture is still incredibly limited.

Is I Love to Dress Like I Coming from Somewhere and I Have a Place to Go a step in the right direction?

It's difficult to do it right as a photographer, because the danger of losing the connection to yourself and the contact with the object is always there. Sometimes it's scary to see photographers there, having their deadlocked plan of what things are supposed to look like which keeps them from perceiving what's actually happening.

As a photographer, you have to be aware at all times that you are holding an instrument of power in your hands. You cement a perspective on a thing with each photo. You have to be able to look and listen while still being aware that it is only your personal perspective. You can transport content, but you can never become the mouthpiece of someone else's life and speak for one person through the photo.

How do you get an adequate picture of African countries in media, books and pictures?

Just be normal. People live as normal as anywhere else in the world and you should go from that. In my time in different countries in Africa, I have seen so many cool works and stories by local artists, photographers and writers which just have to be shown. The generation of creative mid-twenties focus on what they feel like without drawing a new or a different picture of Africa. This generation must be listened to in all the debates that are going on. Their relaxed, self-confident way of dealing with these issues and using references across borders and cultures has the real potential to reconcile.

The idea of the supporting this generation has now evolved into an association – Klaym. We collaborate with the photographers, writers and designers of cities that are always in a workshop where we create the print magazine "Nice" together, which is a portfolio and a showcase for the artists. So after the book contained only pictures from me, the magazine is now showing different perspectives by young artist. For me, it is a privilege to be able to work among these young people right now. There is so much going on in Africa and it's so cool to be a part of that. We'll certainly hear more in the future, because the stories and their huge base of storytelling are far too exciting to be ignored.

Flurina Rothenberger's I Love to Dress Like I am Coming From Somewhere and I Have a Place to Go is available for purchase here.