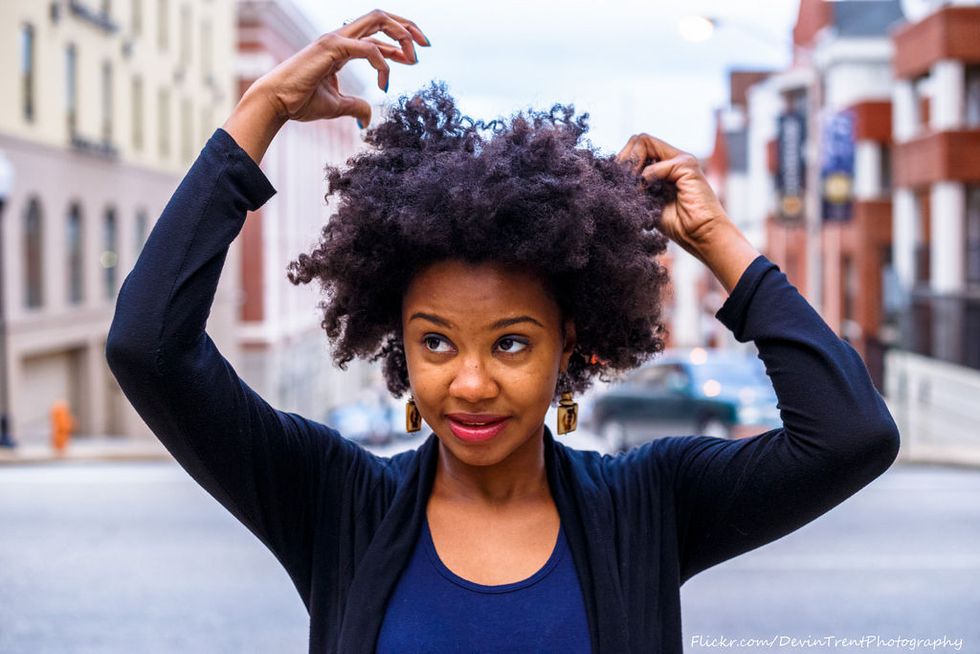 "It’s becoming a return of honor to the African woman."

You may have noticed that Black women are saying ‘no’ to creamy crack—relaxers and straightening—and are instead embracing their hair in its natural form.

On social media there is no shortage of photos, videos, and memes from Black women for Black women celebrating the magic and beauty of kinks, curls, twist-outs, pineapples, Afros, locks, and buns—and of course, the struggle because let’s face it while reppin’ for #TeamNatural can be liberating (especially during freak rainstorms), it ain’t easy.

Most recently we saw actress Uzo Aduba rock an “au natural” at the Toronto International Film Festival over the weekend.

And a few months ago, Lupita Nyong’o, starring in the upcoming Queen of Katwe film, turned heads with a towering bun inspired by the African continent and Nina Simone at the Met Gala . Last year, Angolan model Maria Borges made history at the Victoria Secret Fashion show, fiercely walking the runway with a natural crop cut. And the list goes on...

However, this renaissance isn’t complete without natural hair haters, some being our own family members, who are mystified (you can tell by their disapproving stares) and espouse negative views, instilled by white supremacy and European standards of beauty, that Afro-textured hair is unkempt or “looks like a bird’s nest.” Then there are the clueless ones, who’ll touch your hair without asking for permission (look, but don’t touch is always a safer bet). And the imitators (re: the Kardashian clan).

This was never made more apparent than last month’s protests by South African students at Pretoria High School for Girls and Lawson Brown High School against their schools’ discriminatory codes of conduct, prohibiting natural hairstyles —which begs the question, of all places how is it that natural hair isn’t acceptable in Africa, the birthplace of Afro-textured hair?

Regardless, not even there, can the revolution be abated.

Here are three videos, touching on the natural hair movement (no pun) happening in Senegal, Kenya, and the UK that illustrate what I mean.

"Natural hair is not a disaster, and people don’t have to know how to comb it or take care of it. I’d say for Senegal, the best definition is natural and happy," Agnes Diof, an organizer of Afro Dakar dedicated to helping natural hair make a comeback in Senegal, says.

Beauty blogger Marie Grace Agboton adds, "It’s becoming a return of honor to the African woman. Many no longer feel obligated to have smooth hair in order to feel beautiful. We can have our hair and walk proudly down the street."

Social historian Emma Dabiri raises the all-important question, “Why is the benchmark European hair? And especially if we’re talking about the case in South Africa where the majority of the population are of Black African descent.” Continuing, “The mere fact that you simply allow your hair to grow from your head in its natural form is read as a political act, I think is deeply, deeply significant.”

Curls AuNatural blogger Abena Hagan chimes in, adding “Why is it that it’s okay for me to have a weave and be accepted at an interview, rather than come with my afro? It’s not right and that’s why we’re taking a stance now because we want to be accepted just the way we are.”