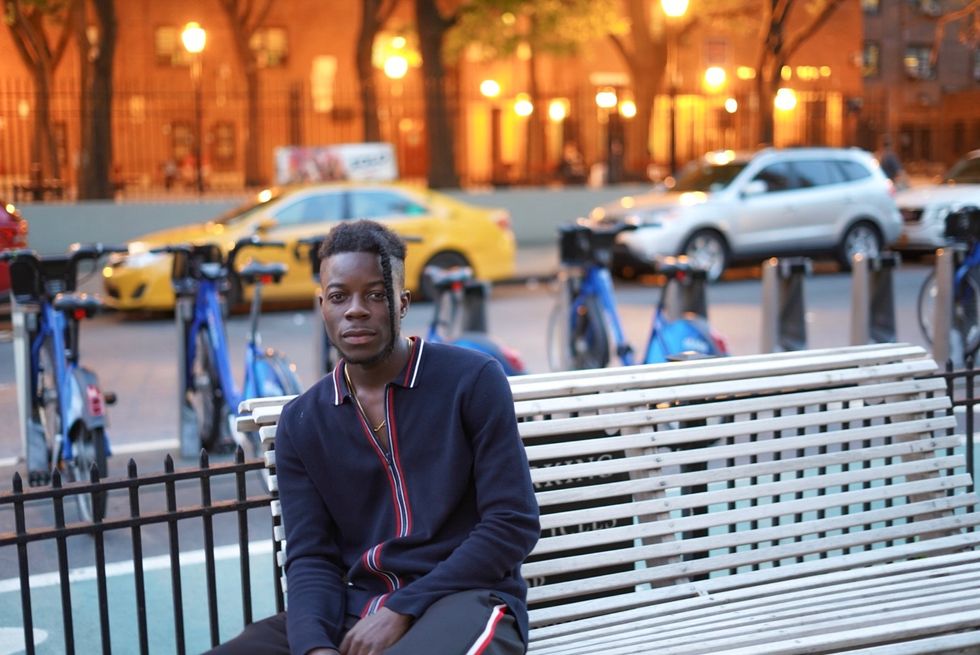 We catch up with Thutmose to discuss his journey and how his song made it into the EA FIFA 18 trailer.

Thutmose just got the biggest look of his career. A collaboration with German-bred producer NoMBe, "Run Wild" serves as the soundtrack to the official trailer to the FIFA 2018 World Cup. It's not every day you get to see one of the world's greatest athletes, Cristiano Ronaldo star in a clip synced to your record, published by the world's biggest video game franchise, EA Sports.

It's Thutmose's high-energy, high-intensity bars and standout melodies that have audiences at the edge of their seats. Following his last single, "WuWu," which was released last year, the Nigerian-born, Brooklyn-raised artist confesses his love and passion for words, using music as a means to express himself in any way possible.

Since then Thutmose, real name Umar Ibrahim, has opened for pop phenom Billie Eilish on tour and released two freestyles, "Pick It Up" and "Norcos."

With the games underway, OkayAfrica caught up with Thutmose to discuss his biggest influences, his journey, and how the FIFA placement came about.

Thutmose, how'd you get your name?

It's from an old Egyptian king. I just love the symbolic meaning of what a king stands for and the confidence it gives to people. Also being African and Nigerian myself, I wanted to tie it back culturally. My real name is actually Arabic.

Where do you fit in the realm of hip-hop?

I think I'm in a very interesting lane, a very special lane. My music is very diverse. I can bring the melody, I can bring the raps, and combine them into who I feel like I am as a person. And try to make that reflect onto the songs.

Talk about your Nigerian background and being raised in New York. How does that play into your life and career?

For me, it's a very special part of my life. Being born there and getting exposed to a whole different kind of lifestyle and different culture. It gives me different characteristics to be honest. It has a different persona to me, being raised in Brooklyn where hip-hop is very prominent and in Nigeria, it's a lot of dance records and gospel music.

Who are your biggest influences?

I'd probably say Kendrick Lamar, Sade, and Jay-Z. I'm drawn to different artists, some for their personalities and some for their art. Some that are just built in the progression of life and the way they handle themselves.

You recently opened up for Migos at the EA Play event. How important is it to come to LA as an up and coming artist?

Tell us about the making of the FIFA song "Run Wild."

That was really amazing because I created the song with producer KillaGraham, who I work with often. He's an amazing producer. We made that song maybe around six months before FIFA even decided they wanted to use that song. One day, it was producer KillaGraham's sort of idea, and he had his production set up. At first, I wasn't really into it. He just convinced me to still go there. I'm very open-minded so I was like, "I got to try this out." I just started writing the song and an hour or two hours later, the song is finished. Months later, I got a random call and FIFA wanted to use the song.

How was it seeing the record featured in the official FIFA trailer?

I was just like "Wow, that's crazy." Growing up in Nigeria, soccer is huge. Me and my little brothers, they play FIFA. All my friends play FIFA. That was surreal. To see Cristiano Ronaldo run around to my song, he was one of my favorite athletes growing up. I used to play that game in Nigeria. It's equivalent to... I'm a big fan of LeBron James. It's like LeBron casually dancing to or appearing with one of my songs, to me it's just mind-blowing. It was a very special moment.

What do you want fans to get from your story?

I'm always trying to let people know to be very self-aware and true to themselves. I just decided to live the life I achieve to live. A lot of times, I perceive myself as a very multi-talented, diverse person. I always try to do that for my music and showcase different attributes. It's a few times I've ever not been true to myself and I've sacrificed a different image or persona to try and tell my life and my story. I encourage others to live their life as they see. It's not live the best life, it's live the most truthful life.

What's a normal day in the life? Walk us through.

A normal day in the life for me is not sleeping at all, being out until like 3 a.m. For the most part, I love eating, scrolling down Instagram and Twitter, keeping myself busy. Just thinking a lot. Just like a normal person, trying to find balance pretty much.

I would be working at some crazy tech company, probably like Tesla or Google or something Trying to figure out some new idea, trying to create. I just love creating. So similar to music, I would try and create something else in another realm.

Who's your dream collab?

This week would probably be XXXTentacion.

What was your reaction to XXX's death?

Pretty crazy. He was one of the few artists I would actually gravitate towards his music, despite him being controversial. I think he was just starting to turn his life around. Even in the music, the progression in his last two albums, and the death and the conversation it has about mental health—depression, anxiety, a lot of issues. A lot more people related to him on a personal basis. For me, around the time I was really gravitating towards the music, I feel like all the noise just started to cancel it out. Just the way he kept going, it's crazy. Just a reminder to live my life to the fullest. You never know what could happen any day, just try to be a good person and live a truthful life.