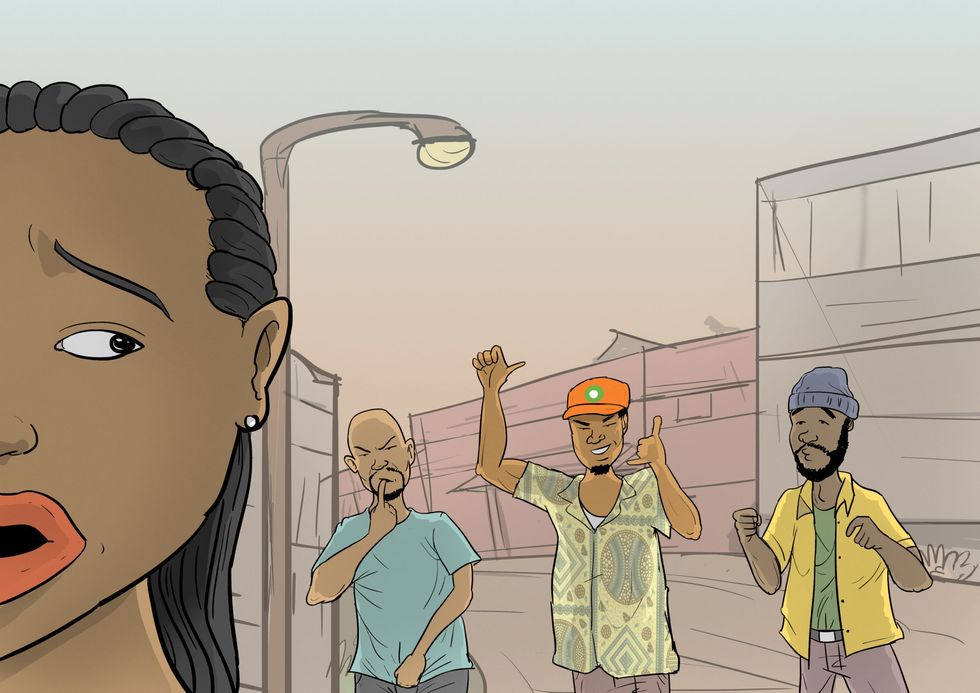 Sexual harassment is rife on the streets of Abidjan, observes Aude Konan, and we must speak out against a culture that enables it.

As a kid I would travel to Abidjan every year to visit my family. It is the land of my blood—the only place in the world where people like me live. The fact that my family tends to treat me like a foreigner when I'm back there wasn't lost on me. But growing up in France, I was used to that treatment. Côte d'Ivoire was a strange yet familiar land, with so much to explore, so many relatives to meet and so much of my history to discover.

Things changed when I went back at 16. I now had the body of a woman and consequently, I had a whole lot of restrictions put on my everyday moves. I couldn't meet my friends on my own, walk on the streets without male supervision or wear revealing clothes despite the burning heat. Abidjan is a lively, intense, multicultural city that barely sleeps. I felt like I was missing out by not enjoying my time there.

One day, as we were driving, an aunt asked me to go and buy her a bottle of water in a shop. I went to the shop and noticed that the security guard was following me. I thought he may think that I was stealing, so I made my way to pay.

He kept staring at me, following me through the aisle. I got to the counter and paid for the bottle, slightly anxious. That's when he grabbed my back and starting hitting up on me.

I told him I was 16. He didn't mind the slightest. He told me I was pretty and wanted my number. I told him I was in a hurry, packed the bottle and left the shop. When I turned around he was still following me, begging for my number.

I looked for my aunt's car but couldn't find it. He cornered me in the street and I reluctantly gave him my number.

My aunt's car arrived and I jumped in with relief. When I told her what just happened, she told me with an aloof face: "Why are you complaining? You should be lucky you're pretty."

That day, I realized that even being under a strict curfew wasn't enough to be protected from street harassment.

By definition, rape culture is a culture where sexual assault and abuse is accepted as an everyday occurrence and where women who go against the patriarchal cultural norms are blamed for their sexual assault. Even the women who still stick to these norms are victim blamed.

In Côte d'Ivoire, no one would openly say: "Don't walk alone or you might be raped." The consequences of not following these rules were pretty obvious. But, even following the rules didn't protect me in any way from street and sexual harassment.

The irony is, growing up in France, I was used to weekly, sometimes daily street harassment happening to me. The biggest difference was that, contrary to French men, Ivorian men would only stop after getting your number. Not matter how long it'd take or how often you'll shout at them to leave you alone.

The men in my family were free to wander, and I would tag along. They were terribly frank with me. They told me their fellow men weren't shit, and that staying loyal to a man was the dumbest thing a woman could do. A good man, they would say, is one that knows how to hide his other women and kids.

I got labeled as a “slut" and nothing I could say or do would change anything.
Being monogamous almost feels like an anomaly because of the strong belief that "boys will be boys"—it is supposedly in men's nature to stray, and holding them accountable would be a lost cause. They could behave as they want, with no fear of being judged.

But, when women do the same, they are ridiculed and insulted.

I was shocked and appalled by the casual misogyny slipping through their lips. They laughed at me, saying that my westernized mind was too innocent to grab such essential life facts. But eventually, I started to get backlash for hanging out with men.

I went to have drinks with a few friends one night, after they had to ask permission. I was 21 back then, and mortified to still have a curfew.

But a few days later, as I was visiting family friends, they told me it wasn't a good look for me to hang out with men because it would give me a “reputation." People were talking about me in the streets, and not in a good way.

My love life wasn't that interesting for people to gossip but nonetheless, I was hit by, “Tu fais des gasoils avec des mecs?" (“so you're having plans with boys, now?")

It was an ordinary night out for me, and we were only eating chicken, but apparently no one could believe me. I guess, because that day I was wearing a pair of shorts, I got labeled as a “slut" and nothing I could say or do would change anything. I decided that in the end, I could never win.

Abidjan is a city that breathes sex, yet spends a big deal of time repressing it because of the strong patriarchal norms in place there.
The atmosphere was suffocating, so I hid in one of the bedrooms. One of my cousin found me and we started talking.

We got a power cut and my friend's father burst in, pointing a torch at us. I guess boys weren't safe in my company, and a chaperone was needed.

After that, I had enough and went home. I spend the rest of the summer stuffing myself with delicious food and binge watching reality shows. I felt very much like princess Rapunzel, shut away in a tower.

Why was I attracting so much sexual attention and objectification? Was it a chip on my shoulder, or was I getting paranoid?

Since I had time to kill, I started to research as to why rape culture here seemed even worse than in France. And I found out I wasn't the only one dealing with it, and that sexual violence was a big, ugly issue that very few people took seriously in Côte d'Ivoire.

According to a report by the OECD Violence towards women, including domestic violence in Côte d'Ivoire, is widely spread and not punished. Domestic violence is considered a “private issue" and is heavily stigmatized: women are often humiliated and shamed for behaving badly and thus “deserved to be punished".

To put an end to that issue, the constitution and the Ivorian laws forbid any discrimination based on gender. The Ivorian organization for women's rights fights for a better and bigger awareness regarding this issue.

Sexual violence is still a taboo and many believe that if a woman is assaulted, she is to blame. It is especially damaging for young girls who are at risk of being coerced by much older men, using their power and money to force them into having sexual relationships.

And most of the time, people don't take offense at the men. They blame the girls, accusing them of luring the men, slut shaming them. When it comes to sexual matters, the blame lies almost entirely on women's shoulders.

“So you're having plans with boys, now?"
The police receive no proper formation on sexual violence and are reluctant to help the victims. Sexual crimes are rarely reported to the police, and in the rare cases when women, do, the police either blame the victims or don't take them seriously.

Abidjan is a city that breathes sex, yet spends a big deal of time repressing it because of the strong patriarchal norms in place there. Women are seen as being disposable to men. Whether they're at home, working, walking in the streets, it's always open season for men. It's time Ivorians as a whole take responsibility for the rise of gendered violence, and for men to be shamed for their abuse and general mistreatment of women.

I was walking a friend home one night when we encountered a group of men coming the opposite way. I was wearing a washed up African dress and yet, the men kept intensely staring at me, or should I say "eye-raping me" (even though I hate the term).

That familiar feeling of fear, anxiety and shame stroked me. My knees shook and it took me all my strength to keep walking, pretending I hadn't seen them. They shouted at me. I kept talking to my friend, hoping that being with a man would make me safer. After we walked past them, they turned around, still staring.

"They looked like they wanted to rape you!" My friend joked. I didn't laugh.