Traveling While Black in South Africa 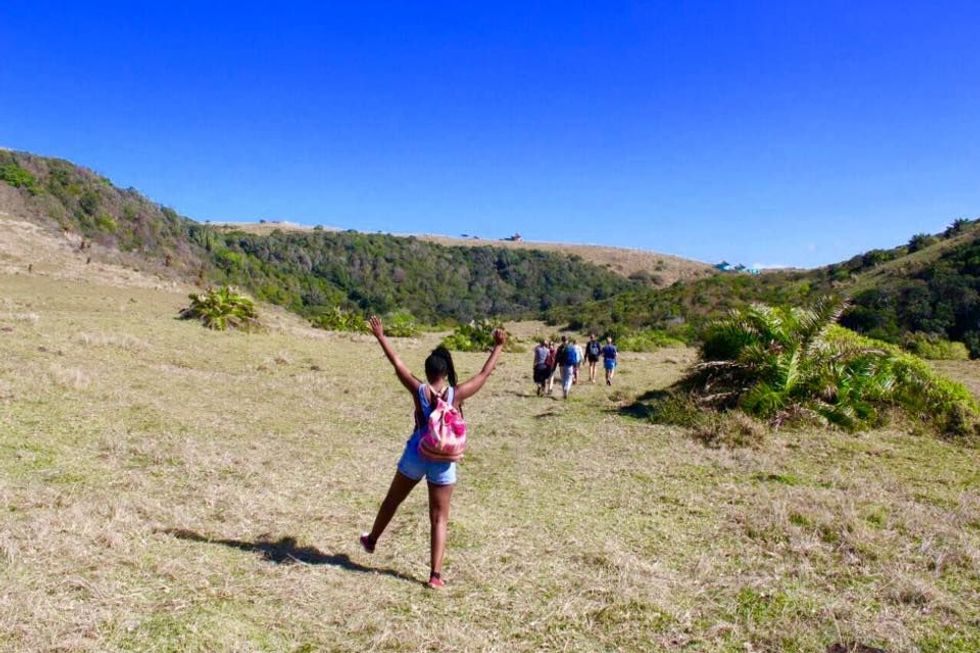 Lerato Mbangeni on the realities of traveling as a black South African within South Africa.

"You're the first South African traveler I've met," said a German chick after popping a Smartie in her mouth.

She was expressing a sentiment I had picked up a number of times since arriving in the small coastal town of Coffee Bay. Each time my partner and I mentioned we were from Johannesburg an eyebrow rose or an "oh!" would escape in surprise.

We were even once asked if we were from England by a lovely old white couple.

Being a South African traveler in South Africa seemed to be the weirdest thing about me that week. Being young and black was the next.

During our five-day stay at the picturesque Coffee Shack Backpackers, where we hiked and lounged on the beach, the only South Africans we came across were the staff. And even they were surprised at our presence there.

There were people from all over the world though.

But I get why we were a rare sight.

The Daily Maverick reported that a young person in South Africa hardly ever has money to spend on travel. “Housing and related costs of water, electricity, gas and other fuels remain the largest household expenditure at 25.4% for the 25 to 34 age group, followed by transport (19.8%), food and non-alcoholic beverages (14.2%), with education in fifth place at 1.9%,” the article said.

They added that young people aged 15 to 34 continue to make up the bulk of the unemployed: two thirds.

And let's be honest, these are black youth they’re talking about here.

There is a certain privilege associated with being able to travel at my age, and especially while being black. There’s also a certain privilege that comes with having a job and the ability to stash away enough cash to afford a getaway (even if in my case it means being broke for the rest of the month).

The first place my train of thought starts is actually at the airport.

For black South Africans, if you're traveling by taxi or bus, it looks like you don't have money. Because if you did, you'd fly of course. How you are getting there must have an answer as impressive as where you're going. Never mind that all the tourists at the place we were staying had taken a bus and then a minibus shuttle there. In fact, as they were planning their routes, not one person looked at any flights unless they were heading back home to Germany, England or the U.S.

Then there's the location.

There are buzz words here like the capital cities (ie: Cape Town, Durban etc) and then places like Moz, Dubai, then Europe, followed by the U.S.

Then of course you must stay in a hotel or fancy chalet.

Local mainstream media is creating an image of how travelling looks. On TV and magazines no one is ever trekking across a country in a bus for hours on end. This is of course with the exception of recent ads by SA Tourism.

Most of my travels, like the foreign tourists I've mentioned, are made up of backpackers and Airbnb homes.

We went to a place in the poorest province in the country and had the most breathtaking experiences and paid a fraction that we would in the buzz locations.

My point is that, traveling is already near impossible because of our socio-economic backgrounds and responsibilities and now we make it even further out of reach by placing ridiculous expectations on how one must travel when they do finally afford to do it.

Traveling within our own country should not have to be limited to visiting relatives. We should be travelling within whatever budget we can scrape together and luckily our beautiful country does allow for those options.

When Farah from the UK told me that she was on a three-month holiday here I was able to agree with her when she said we have the best holiday spots.

Lerato Mbangeni is a young black South African journalist with a thrilling love for the arts and an affinity for thrifting in dingy parts of Joburg. Keep up with her on Twitter @leratombangeni and at her blog, S’Godi Glam.