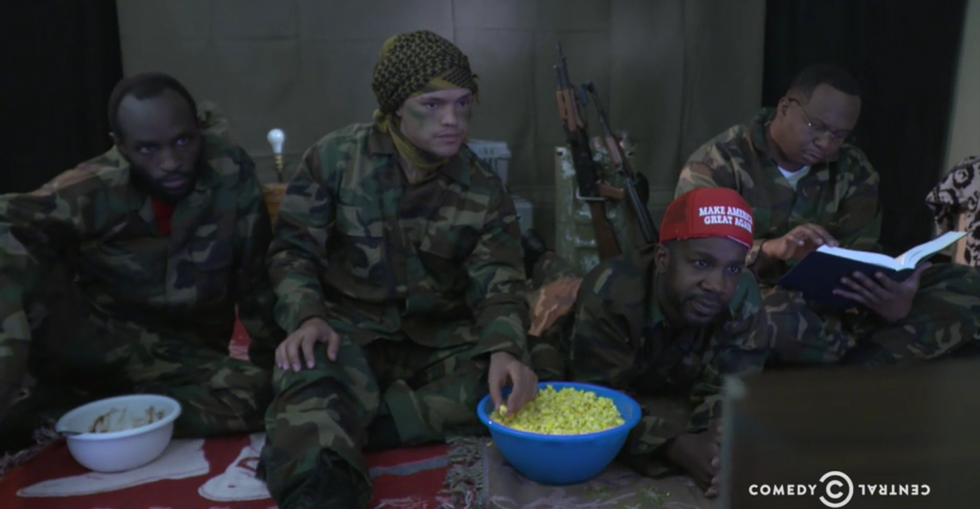 "Absolute Bulls#!t Chris Crispy is giving Hillary Clinton all the credit for our kidnappings."

Let's face it the Republican National Convention held in Cleveland, Ohio this week has been an absolute shit-show. From Melania Trump's plagiarism controversy (she bit U.S. first lady Michelle Obama's words verbatim during her speech) to Ted Cruz's refusal to endorse Donald Trump, the fodder of the RNC has been more entertaining than TV show The Apprentice.

And we cannot fail to mention New Jersey governor Chris Christie's speech delivered Tuesday night where he labeled Democratic Party presumptive nominee Hillary Clinton, "an apologist for an Al-Qaeda affiliate in Nigeria." Christie then goes on to blame Clinton for "the capture of innocent, young women," before the crowd erupted, chanting "Guilty!" and "Lock her up!"

So South-African The Daily Show host Trevor Noah imagined what it would be like if meanwhile Boko Haram had a viewing party somewhere in Nigeria. While the exchange makes light of the Chibok schoolgirl kidnappings that sparked viral hashtag campaign #BringBackOurGirls—which isn't so funny because many of the girls remain unaccounted for two years later, it's difficult to deny the hilarity of this scenario.

Boko Haram reacts to Christie’s suggestion that Hillary is to blame for their actions. https://t.co/F7CgCUnTSahttps://t.co/WtHQzjorLB

"Absolute Bulls#!t Chris Crispy is giving Hillary Clinton all the credit for our kidnappings," says one Boko Haram adversary while ironically donning a fitted cap with Trump's slogan, "Make America great again" on it.

Then Noah, dressed like a member of the terrorist group, chimes in, "We here at Boko Haram didn't need any help from Hillary to kidnap those girls. We will call Hillary when we need help deleting our emails."

"Light-skin is right," adds another militant with a belabored Nigerian accent. "You do all the hard work, you achieve your goals and then they give credit to some white person."

Yup, which pretty much describes the story of every black person's life at one point or another.

Grab some popcorn or jollof rice, whichever you prefer, and enjoy below.