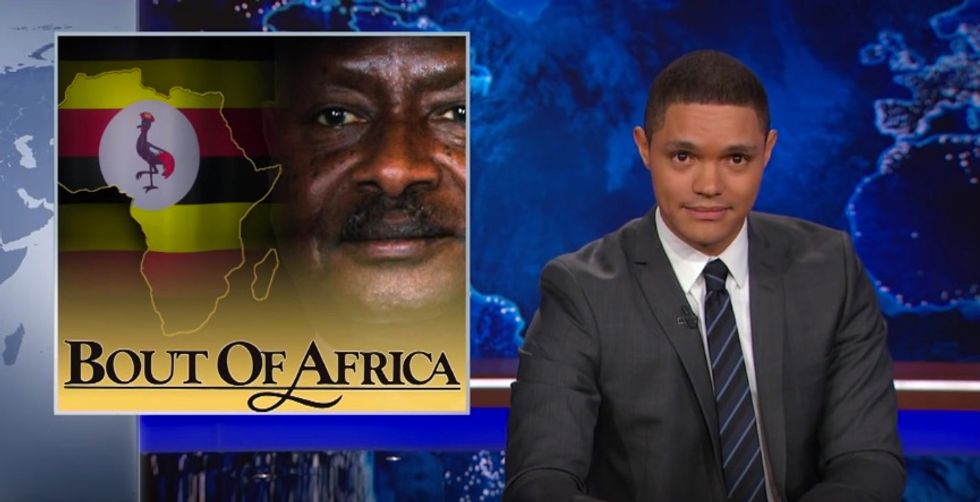 Watch Trevor Noah weigh in on the Ugandan presidential election in a brilliant segment on 'The Daily Show.'

As crazy as this election cycle has been in America, Noah insists it could be worse. “And it is worse, in Uganda," he says.

On Saturday, Uganda's incumbent president, Yoweri Museveni, was declared the winner of the country's troubled presidential election. He's already one of Africa's longest-serving presidents. With this win, he'll add five more years on top of the three decades he's served.

“To break it down, this guy has been in power since 1986," Noah said. “In the Ugandan version of Back to the Future, whenever Doc Brown asks Marty who the president is, Marty says, 'It's the same guy'."

In January, Ugandans took to Twitter to note just how much has changed since 1986–everything, of course, with the exception of their president. We can't help but think The Daily Show writers must have caught wind of the #1986Pictures tweets–all the more likely when you consider one of Noah's staff writers is the Ugandan comic Joseph Opio, who rose to notoriety as the host of the political satire talk show LOLUganda.

A few months back, Noah called Trump the “perfect African president." But what would happen if Trump was up against an actual African dictator? The Daily Show enlisted their friends in Kampala to ask Ugandans on the street which of the two “power-hungry maniacs" would get their vote: “Trump or dictator Museveni"?

The results of course were mixed. Some picked Trump for pure entertainment value. Others said they don't think Ugandans would put up with Trump's hair. One man noted he has an uncle who's like Trump. “He's a man who is a loose cannon." And as one person put it, “That would be like asking a Muslim if they would have bacon or ham."

Watch the full segment below.