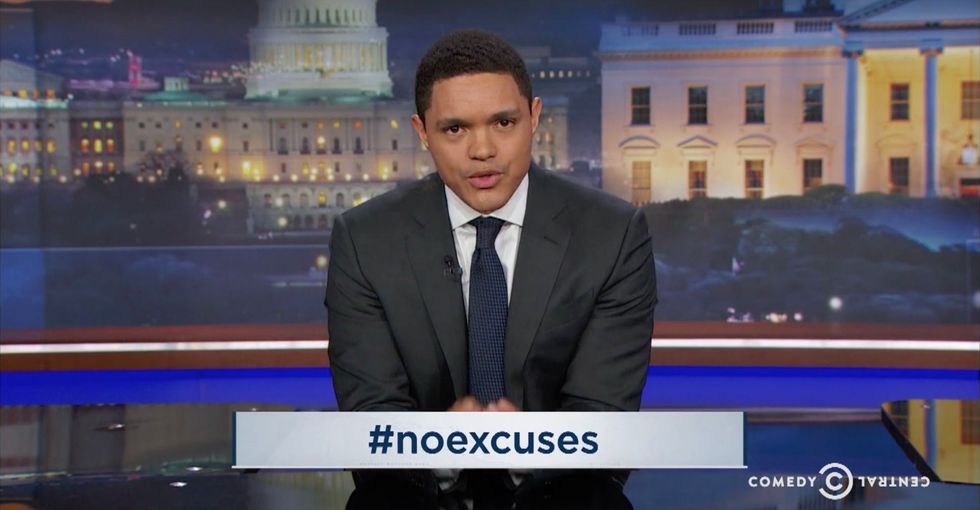 The Daily Show’s Trevor Noah shares a powerful message ahead of the U.S. presidential election.

Speaking one last time to the American people before Tuesday’s U.S. presidential election, Trevor Noah had a powerful message to voters, and particularly to those potential voters still on the fence.

“We spend a lot of time writing jokes on the show, thinking of the funniest way to share the news and talk to you,” The Daily Show host began, “but honestly, for this segment, I just wanted to be straight-up.”

“I see people online, I see people on TV, I hear people in the streets talking about how they don’t feel like they want to vote. And I understand that. It’s not always exciting to vote. Some people go, ‘Hey, there’s no need to vote, Hillary’s up in the polls.’ Now if you’re one of those people, I would urge you to reconsider.”

"You can’t rest. This is not one of the times to rest," Noah continued. "And the most important reason I say that to you is because the people on Donald Trump’s side are really, really enthusiastic voters. He has the KKK voting for him. Like, if ever there was a reason to vote, it’s because on the other side the KKK sees an opportunity to come back into the mainstream. That is the scariest shit I have ever come across in my life.”

Noah concluded by urging his viewers to go out and vote. "Don’t be in a situation where you lose your democracy before you appreciate it.”