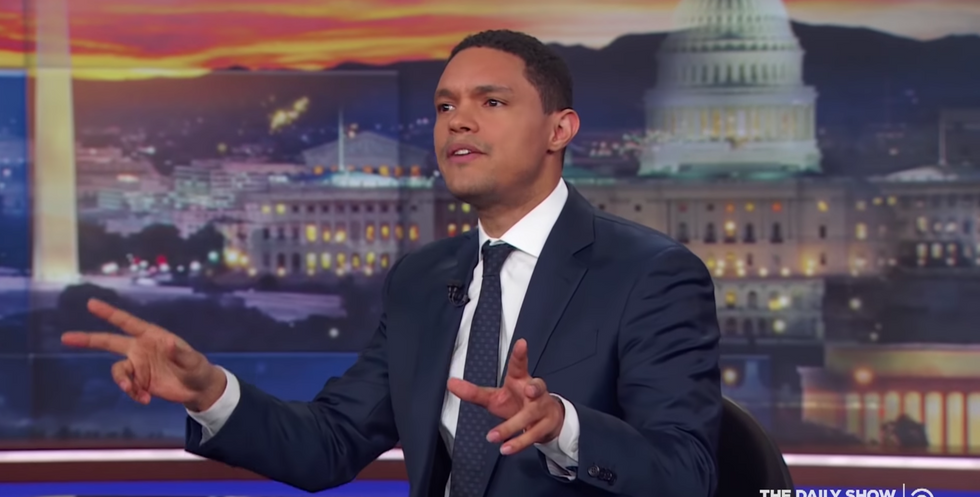 The French ambassador tried to teach the late night host about the politics of inclusion. Noah hilariously exposes the hypocrisy.

It's not everyday that a European ambassador writes an angry letter in response to a late-night joke but these are strange and exceptional times.

When Trevor Noah congratulated the African team for winning the world cup on July 16 he got a stream of criticism back from French people, offended that French people of African descent are being called anything other than French. This included an official letter from the French ambassador to the United States. Noah's response: share the letter with the world, deconstruct the politics line by line, reflect on colonialism, and laugh at the temporary love for diversity that possesses politicians when they want to profit from people of color.

In part of the daily show's "Between the scenes" segment, Noah read the letter from the French ambassador to the United States Gérard Araud, who claimed that "nothing could be less true" than Trevor Noah's joke that the World Cup was an African Victory.

"Now first of all, I think I could have said they were Scandinavian. That would have been less true," he joked.

He went on to read Araud's definition of what it means to be French which included some obvious points like the fact that the players have citizenship, that most of them were born in the country, that they learned to play soccer in France and are that they are "proud of their country." The ambassador made sure he added France after every point so that there was no more confusion.

"The richness and various backgrounds of these players is a reflection of France's diversity," the ambassador concluded his remarks about French identity.

"Now I'm not trying to be an asshole but it is a reflection of France's colonialism," Noah clarified so that there wouldn't be any confusion about which France was being talked about.

Beyond the jokes, Trevor Noah and Araud attempted to tackle the racial politics that have haunted discussions around the World cup victory. Araud argued that talking about the Africanness of the French players "even in jest" legitimized the ideology of "whiteness as the only definition of being French." Using the United States as a scapegoat, he mentioned that France does not believe in hyphenated identities.

Noah pointed out what should be obvious, that there can be a multiplicity in identities. He also highlighted that perhaps this was not just a question of whether one can be African and French but the individual's intention in these discussions.

"When I say they are African. I'm not saying it to exclude them from their Frenchness. I am trying to include them in my Africanness. I am saying I see you my French brother of African descent," he concluded.

Watch the whole segment below: