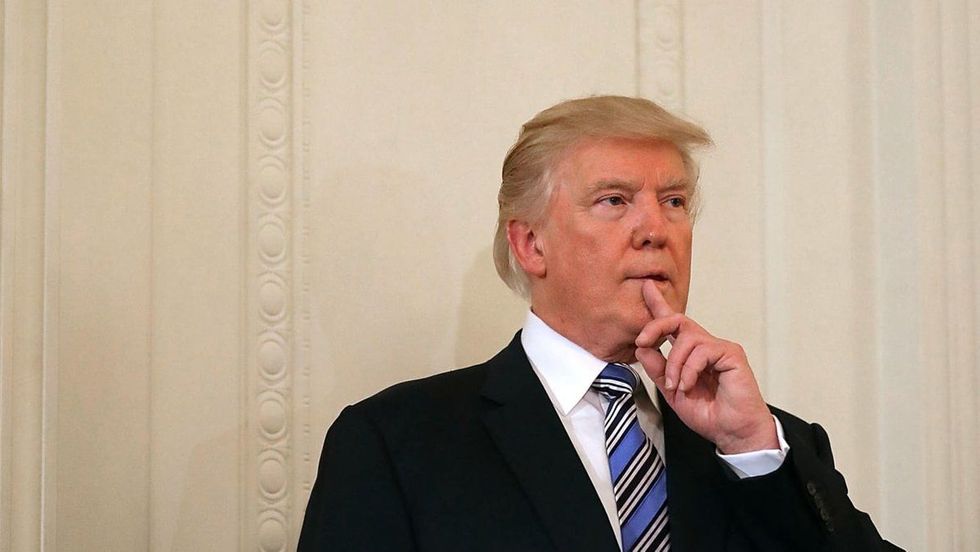 Trump left folks confused as he laughably stumbled through responses about his travel ban on Wednesday.

On Sunday, Donald"Not My President" Trump, reworked his infamous "Muslim Ban," to include Chad, North Korea and Venezuela, while removing Sudan from the list.

Why did he make these arbitrary changes to an already gratuitous policy? Well, he doesn't know either.

When asked by a reporter on Wednesday, why he lifted the travel ban on Sudan, Trump struggled to provide an even slightly coherent answer.

"First of all, can you explain to us why Sudan was removed?” asked a reporter. “And second of all, how does the travel ban work in North Korea that doesn’t allow their people out of their country?”

Here's what he had to say:

“Well, the people—yeah, the people allowed—certain countries—but we can add countries very easily and we can take countries away."

“And as far as the travel ban is concerned,” he continued. “Whatever it is, I want the toughest travel ban you can have. So I’ll see you in Indiana. We’re going to go over some more points that have not been talked about.”

It's okay, Trump, your plan doesn't make sense to us either.

Though Trump appears to be clueless, many believe that the changes to the policy were made in an attempt to make the order seem as though it isn't fully target towards Muslims—while still ensuring that it targets Muslims, reports Think Progress.

Many Chadians have expressed confusion as to why their country was added. Did the man spin a globe, close his eyes, and just roll with whichever country his finger landed on? It's very possible, however in its original statement, the administration claimed that Chad was added after the government failed to "share the required anti-terrorism and public information with the U.S."

There's also been speculation that the ban might have something to do with Chad's attempt to fine Exxon Mobile $74 billion for skipping royalty payments. A fine which the oil giant was eventually able to avoid after the two parties reached a settlement.

We know not to ask Trump about the reasoning behind the decision. While his administration is yet to provide any real information, Lt. Gen. H.R. McMaster, the U.S. National Security Advisor,  says the "list is not fixed. On Chad, there was a real debate.”

Nonetheless, people are still trying to figure out what exactly Trump was trying to articulate during his press conference. Everyone seems to be having a really difficult time. Read some of the hilarious responses to Trump's "statements" below.

President Trump on why Sudan was removed from the travel ban pic.twitter.com/ipEAS2F5XP

If I didn't know who was in this exchange, I would have thought I was reading an example of someone experiencing a stroke.

I speak clearer than this, when I am sleeping.

I damn near had a stroke trying to decipher his jibber jabber. I've heard ppl falling down drunk sound more coherent.

Just ran this through my Trump Enigma machine™ and it printed out "I have no idea what I'm talking about. A Sudan is a car, right?"

Sudans are manufactured in Nambia.

Maybe his response would make more sense if I read it in reverse. pic.twitter.com/w2Ae90ZtyN