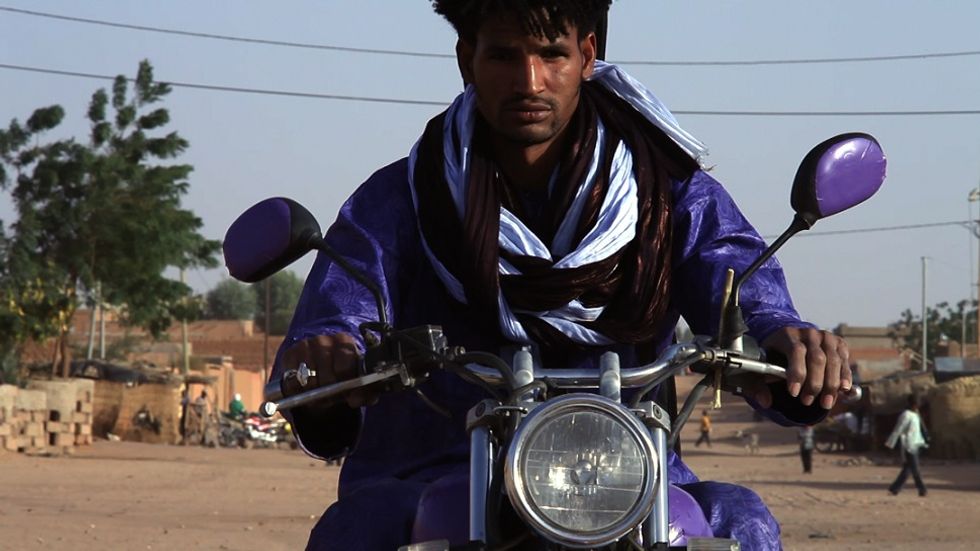 Enter here to win a pair of tickets to see the Tuareg remake of Prince's 'Purple Rain' at the New York African Film Festival.

The 23rd edition of the New York African Film Festival gets underway this week. Presented under the theme “Modern Days, Ancient Nights: 50 Years of African Filmmaking” (a nod to the 50th anniversary of the “Father of African Cinema” Ousmane Sembène’s first feature, Black Girl), this year’s festival includes 25 feature-length films and 27 short films from a total of 26 countries. As in previous years, the festival begins with a week of screenings and events at the Film Society of Lincoln Center (May 1 + May 4-10) before continuing throughout the month of May at Maysles Cinema in Harlem (May 13-15) and over Memorial Day Weekend at the Brooklyn Academy of Music as part of BAM’s DanceAfrica festival (May 26-30).

Okayafrica is teaming up with the NYAFF to offer up a pair of tickets to see Akounak Tedalat Taha Tazoughai (“Rain The Color Blue With A Little Red In It”) on Saturday, May 7th, at the Film Society of Lincoln Center. Akounak, if you recall, is Sahel Sounds founder and filmmaker Christopher Kirkley’s remake of Prince’s Purple Rain starring Nigerien musician Mdou Moctar. The project marks the first time a full-length film has been shot entirely in the Tuareg language.

In an interview with Okayafrica, Kirkley shared that he wanted to celebrate and showcase the Tuareg guitar scene through a fictional lens. “You can’t talk about fictional musical films without talking about Purple Rain,” the Akounak director said. “It’s such a landmark film that set the tone for everything—from other musician-based films to music video as an art form. It began, as most ideas, as sort of a joke, but also as an imagining of ‘what would Purple Rain look like retold in the Sahara?’ After years of talking about, I realized the only way to find out was to make it.”

Enter your information in the form below or head to the link here for a chance to win a pair of tickets to the Saturday May 7th, 6:30pm EST screening of Akounak at the NYAFF at Lincoln Center. Winner will be notified by email.

For tickets and more information on the 2016 New York African Film Festival head here. See below for a full schedule of events.

The following schedule of the 2016 NYAFF is divided into the three main venues of this year’s NYAFF:

THE AMPHITHEATER AT FILM SOCIETY OF

2:00 While You Weren’t Looking

1:30* Intore + Some Bright Morning: The Art of Melvin Edwards

9:15 While You Weren’t Looking

6:00* Black Jews: The Roots of the Olive Tree + The Dance of King David

6:00† Negritude: A Dialogue between Wole Soyinka and Senghor

2:00* Oya: Something Happened On The Way To West Africa! + Finah Misa Kule

6:00 The Other Side of the Atlantic

2:00 Kirikou and the Wild Beasts

*Director will be in attendance