Tumi Molekane is the Only OG Releasing Albums We Care About 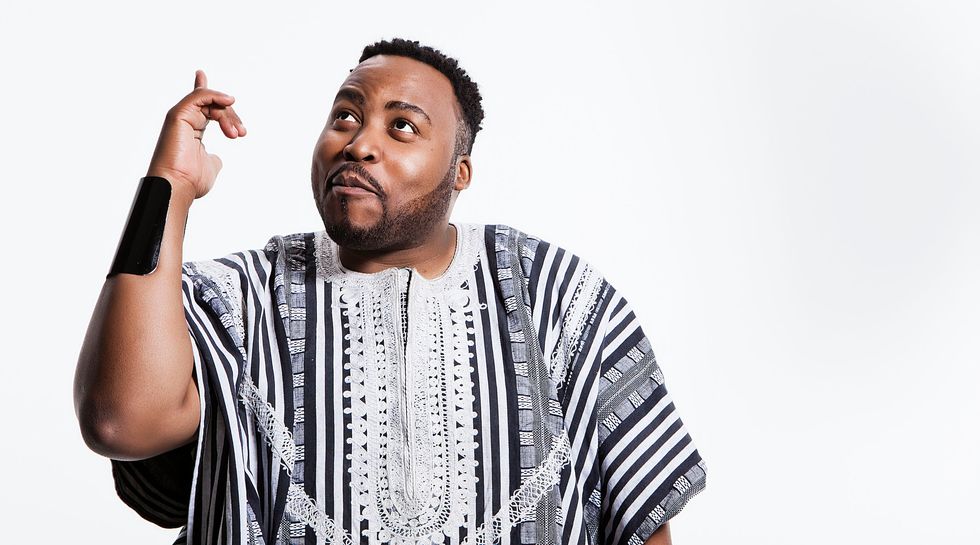 South African rap OGs like ProVerb and HHP are still releasing albums. Which is a great thing. But their music just doesn’t have the same impact as it used to in the mid-2000s and early 2010s. Maintaining a rap career, especially in South Africa, is tough. The lifespan of an artist in the mainstream is scarily short. Skwatta Kamp, Teargas, Pitch Black Afro, all had their time.

Then there is Tumi Molekane. He has maintained a rap career that spans more than a decade. And, unlike his counterparts, his music still matters. When he releases an album in 2016, it’s still a thing. His latest album, Stogie T, opened at number one on South Africa’s iTunes.

The rapper recently changed his name to Stogie T. The music is a little different, too, sounding more mainstream than his previous releases. One way T has been able to remain relevant is by understanding the game and his position in it. Also, by staying true to himself, while still progressing; by not sticking to one sound and telling the same stories.

Tumi understands that music changes. He might not be entirely happy with the direction South African rap music has taken (as expressed on his song “Too Long”), but unlike the average OG, he understands that new school rap isn’t all trash.

“Just because people are not rapping as prolifically as they did before,” he wrote on Instagram a few weeks ago, “doesn’t mean hip-hop has gotten worse. I actually believe there is magic in how young artists can catch a vibe or wave and build something you can feel without a clear formula or science.”

It reflects in his own music. Even though, he remains the potent lyricist he was on his earlier projects, T is constantly changing. His first solo album Music from my Good Eye (2006) had its own character, as did his second, Whole Worlds (2010). On the latter, he featured the kwaito star Brickz on the lead single “Bambezela.” That was way before working with kwaito artists was a thing for hip-hop.

Return of the King was pure genius. It had a sound that tied it together, and featured an array of guests. And it still didn’t sound like a DJ compilation. Live at the Bassline (2004), Tumi and the Volume (2006), Pick a Dream (2010), the three albums he released with the band The Volume, all sound different. And let’s not forget The Journey, his 2015 collaboration with French producer trio Chinese Man.

Stogie T is another coherent body of work. T always knows what he wants from an artist when he features them. He will put lyricists such as AKA and Nasty C only on the hook (“Miss Joburg,” “Clean Stuff”), and have Da L.E.S just talking crap and not rapping (“Freakend”), because he feels that’s what they are good for on that particular song.

Tumi doesn’t force change to fit in. Neither does he try to create the same album over and over again, which a lot of rap artists who have been in the game for years usually do. And it’s not just in South Africa; in the U.S., an artist like The Game will either feature whoever’s hot at the moment and end up with a scattered project or tell the same stories over and over again with another iteration of The Documentary.

On Stogie T, Tumi is giving us his reality. He isn’t a struggling up-and-comer borrowing money from his mother anymore, like he was on the song “Breathe” from Music from my Good Eye. He now has rich people problems. He is eating four-course meals at Cape Town’s Four Seasons Resort (“Diamond Walk”). On “By Any Means,” he raps, “It was hard for my bae/ We struggled to pay/ She stuck it out with a nigga, now it’s hard to figure St Tropez or Champs-Élysées.”

A rapper like ProVerb (one of Tumi’s peers) is also pretty good at giving us his reality. But it’s the music ‘Verb chooses that kind of lets him down. Recently he has chosen to produce most of his stuff, which hasn’t helped much. With Tumi, however, the music is forever exciting. And that feat comes with challenging himself, failing if he has to, or roping in young talent—such as the producers Tweezy and Tru Hitz—and having them work out of their comfort zone to achieve his desired sound. He’s the type of artist who would rather fail trying to progress than play it safe with the same tried-and-tested formula.

T was trying something new on “Hello Kitty,” a song which didn’t work for his fans. “I was leaving an incredible legacy with a band,” he told me last year. “I was like, ‘It’s new, guys, I’m now shooting in the dark and I’m reaching, and it’s important for you to see that process.’ And when you get to a track like “Broke People” you’re like, ‘Oh now I get it, the strokes are finer now’.”

It’s also his approach that sets him apart. While most artists collect beats and write to them, Tumi sits down with musicians and gives them his vision. On Return of the King, he had the Swiss producer, Fred Hirschy, design the album’s sound. The uniformity wasn’t a coincidence. It was craftsmanship at work.

The new album is another example. The emcee worked with musicians one wouldn’t picture him collaborating with, such as Nadia Nakai, Yanga, Da L.E.S and Emtee. Unlike that of most old school hip-hop heads, Tumi’s judgement of talent isn’t clouded by nostalgia; he recognizes talent for what it is. It explains why he signed Riky Rick to his Motif Records stable a few years ago. At the time, Motif’s roster included lyricists like Reason, Nova and Perfecto. Riky seemed an odd signing to many fans. He wasn’t half the lyricist Reason was, but that didn’t mean he was a bad artist. Tumi understood that. Riky is now one of the most successful artists in South Africa.

As an artist developer, he also catapulted an artist like Reason into the mainstream. Reason had released his debut album, The Reasoning, a few years prior. It made no impact, partly because of the nature of the music—it was nothing innovative. Tumi was the executive producer of Audio 3D, Reason’s first album under Motif Records, and the best of his career thus far. Tumi sat in on sessions and was involved creatively, pushing Reason to work out of his comfort zone. Most of the music on Audio 3D was electronic and EDM-related, a great departure from the tired boom bap production of The Reasoning. It goes to show what a genius Tumi is—he has the ability to craft progressive music without being a parody of what’s popular.

It doesn’t stop with music. Another way Tumi has been on people’s radar is through rap battles. He’s the only mainstream artist to participate in Scrambles For Money, South Africa’s biggest battle league. Most of the participants have been underground rappers. It takes guts to put yourself in that position as a reputable artist (ask Drake). T entered. His first battle was with the backpack rapper One-L. Losing that battle could have tainted his reputation. But T doesn’t play it safe. He’s forever progressing, rapping alongside new talent like Youngsta, Nasty C and Ginger Trill and thus ensuring his presence is felt by the new generation his peers fail to impress, and end up sneering upon.

It’s because of all the above, and probably more, that out of all the OGs who are still releasing albums, it’s Tumi’s that we genuinely care about. Not just for the legacy, but the actual music itself.