These Are The Most Breathtaking Images In Ugandan Photojournalism This Year 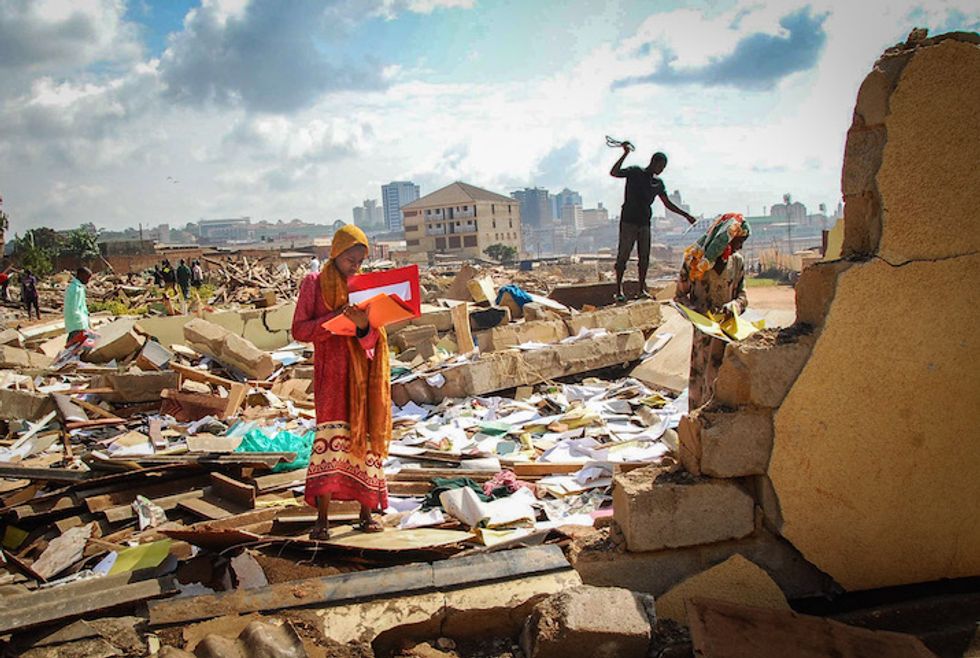 Check out the winning images from this year's Uganda Press Photo Award in Kampala.

Last month, Ugandan photojournalist Abou Kisige received his industry’s most prestigious homegrown award. His captivating image of a young student scavenging for her notes among the debris of a razed primary school had won him the Uganda Press Photo of the Year Award. But, according to Kisige, the photograph almost didn’t happen.

"I was at the scene and was walking away, when I saw a girl looking for her notes from the pile,” said Kisige at the awards ceremony, as reported by New Vision. “I decided to take the photo and I did not know that it would win an award.”

Now in its fourth year, the Uganda Press Photo Award (UPPA) aims to promote the best of today’s photojournalism in Uganda, encourage a new generation of photographers and remind the viewing public of the importance of a vibrant press for democratic development. Applicants are invited to submit photographs for consideration in several categories, including News, Sports, Portrait and Daily Life, while additional panels, discussions and workshops also take place prior to the judging process.

UPPA Director Anna Kućma told Okayafrica via email that she had noticed a promising trend among the 115 applicants who submitted 1,500-plus entries.

“Our applicants were, as per industry norms, predominantly young and male,” said Kućma. “However this year we have seen a much larger contingent of female entrants, and a disproportionate number of female winners. This is a very positive change to see happening, because it shows that we’re reaching the right people.”

The winning and runner-up images from this year’s awards competition are currently available for public viewing on the UPPA website and at the Uganda Museum in Kampala until November 28.

Check out this year's winners below.

A pupil of Nabagereka Primary School searches for remains of her notes in the debris left behind after an investor razed her school. The institution, named after the Queens of the Buganda Kingdom, was home to over 600 pupils and over 50 staff. The school was razed in the early hours of the morning to avoid the move being opposed.

"Products of Our Environment" by Sarah Waiswa

"You are what you surround yourself with," reads Waiswa's caption

Wasswa holds on to his falling trousers as he tries to balance a log on the side of a high rise building in Kampala. He commutes into the city from Gayaza daily to work on building sites, a job that earns him an average of five thousand Ugandan shillings (USD 1.40) a day.

This is the source of the longest river in the world. The rocks mark the start of the 4000-mile river.

Zaidi, a father of three from Bukoto, has been a boda-boda motorcycle taxi operator for 8 years. The scars on his body are signs of accidents he has been in over the years.

"Luke Warm" is the story of 10-year-old Luke who has been living with non-verbal autism. His mother had to overcome many challenges in trying to get him diagnosed, getting resources to help with therapy and overall the stigma that she faced from her relatives and friends. He has gone from not being able to stand and feed himself to making great strides. However had he been properly diagnosed early on, and gotten access to therapy, he might have made much more progress.

All images courtesy of the Uganda Press Photo Award.