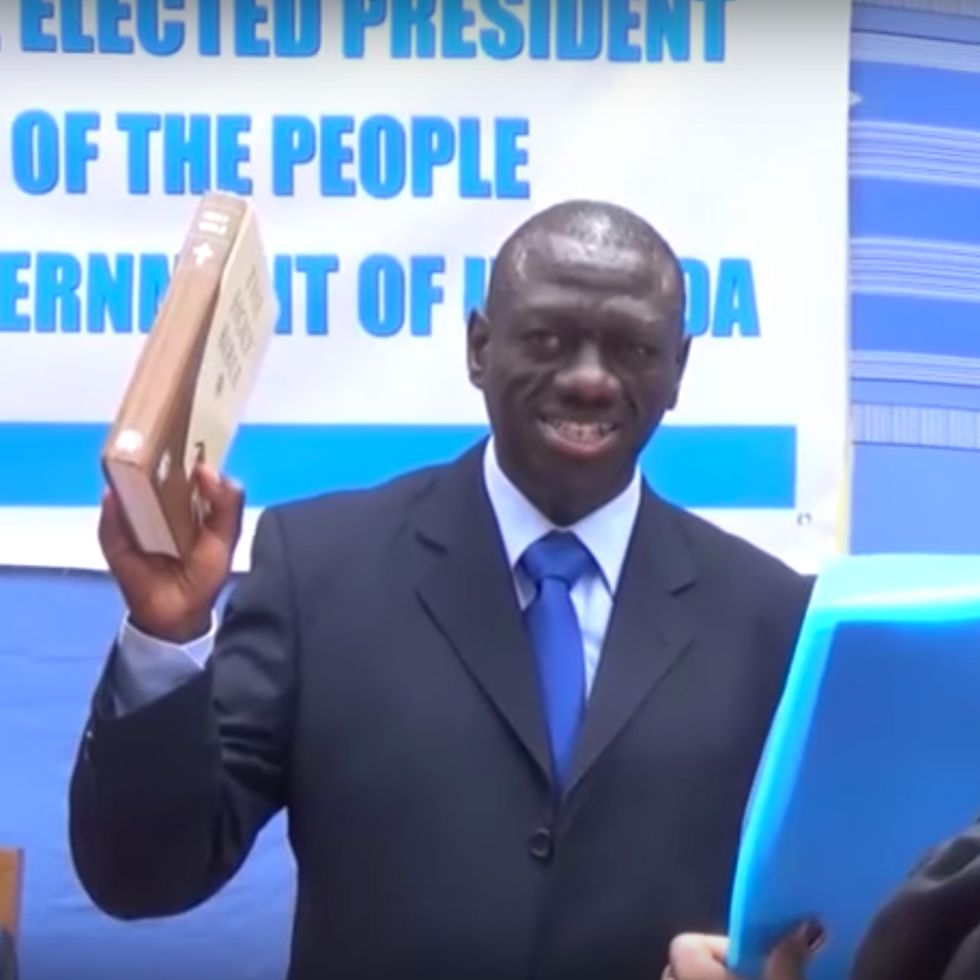 The leader of Uganda’s largest opposition party Dr. Kizza Besigye was charged with treason today in a Ugandan court. Besigye has been under house arrest in Kampala since the election but was detained by police and taken out of the capital. His lawyer Erias Lukwago told the local media, "We have been informed by police today that Besigye appeared in court in Moroto and was charged with treason."

Yesterday 71-year-old Ugandan President Yoweri Museveni was sworn in for his 6th term, in a ceremony attended by dignitaries from across Africa, including Zimbabwean President Robert Mugabe, South African President Jacob Zuma and President Omar al-Bashir of Sudan. Ahead of Museveni's inauguration, security forces detained opposition figures and the government blocked social media sites like Facebook and Twitter, drawing criticism from rights activists.

Kizza Besigye at a mock swearing-in ceremony in Kampala shortly before being arrested and charged with treason. Screengrab from FDC video.

“It’s been a week that I am under house arrest here at 15km from Kampala where I live,” FDC spokesperson Ibrahim Ssemujju told Okayafrica. The previous Monday his house was surrounded by armed military and he hasn’t left since. “Hundreds of our supporters are in prison and others are beaten,” he continued. “We had told Museveni that we will protest against his swearing in ceremony that we consider as constitutional coup, and his response was to deploy military around Kampala and arrests many of our members.”

Besigye who leads the Forum for Democratic Change (FDC) called the February polls a fraud and demanded an international audit. Uganda's top court has since ruled in Museveni's favor. Besigye was arrested again after leaving his house for Kampala’s city center, where he addressed a crowd of his supporters and proclaimed himself as the winner of the recent presidential election. The FDC party released a video of his own swearing-in as president of Uganda on social media. See below:

“The situation in Uganda is not good,” the BBC Great Lakes reporter based in Kampala, Ignatius Bahizi told Okayafrica. “Heavy military and police deployments are cracking down on anybody wearing colors of the opposition party FDC.”

Museveni, who took power by force in 1986, is already one of Africa's longest-ruling leaders, and will have been power for 35 years when his new term expires in 2021. Museveni has not said when he will retire and some critics charge that he wants to rule this East African country for life.

In a statement, the opposition party stated that Besigye would “establish a transitional government of national unity to restore the control of national resources and state institutions to the people of Uganda.”

“The transition will be inclusive, peaceful and without retribution. It is hoped that those who stole the election will accept their time has passed and it is in their interest not to resort to violence,” the FDC statement reads in part.

While Omar Al-Bashir was in Kampala yesterday attending Museveni's inauguration, Amnesty International urged Uganda to face up to its international obligations and arrest the Sudanese president who is wanted on charges of genocide, and hand him over to the ICC.

During his speech after he was sworn in, Museveni defended Bashir’s presence in Uganda and dismissed the ICC, calling the court “a bunch of useless people” that he no longer supports.

Museveni thanked also Russia for its willingness to sell weaponry, "without conditions and arrogance like other countries," and promised a war on corruption.

US, European and Canadian diplomats left abruptly when Museveni made disparaging comments about the International Criminal Court (ICC).

The recent public order management law in Uganda, grants police and other security services wide discretionary powers to permit or disallow public meetings. It has generally been implemented to undermine or obstruct Ugandans’ assembly rights when protesting against the president Museveni’s government.

“We have no other option, if we give up fearing the government’s threats, we won’t survive the diseases or poverty, we will keep protesting until the international community comes for our help,” said Ssemujju. “Hundreds of Ugandans die everyday, because of the lack of treatment or simple medicine in the hospital. If we don’t keep this battle against this dictatorship that is no longer able to provide social services to its people, and surrender I don’t see any future for our country.”