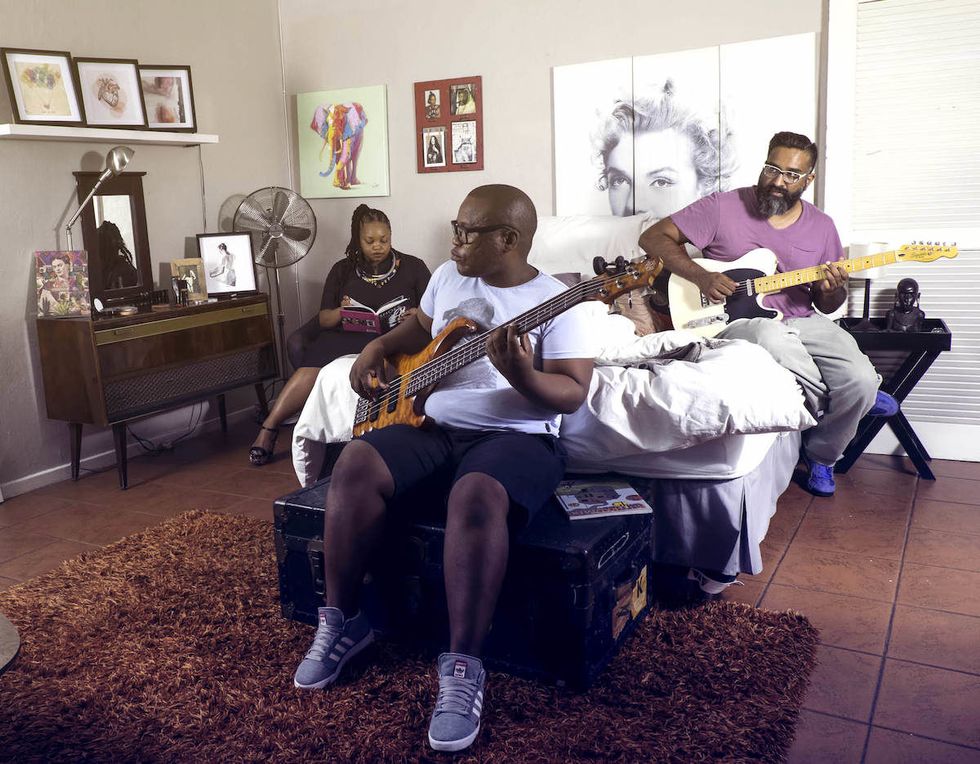 Categorizing Uju's music is near impossible.

The music that South African outfit Uju makes is near impossible to categorize.

It has elements of soul, funk, jazz, East Coast hip-hop, and even rock, among other genres. Lead singer Ntuthu Ndlovu’s Zulu vocals also give the music an authentic South African feel.

Her vocals shape-shift from a piercing soprano to a semi baritone to fit the songs she's singing over at a particular time. She sings mostly about relationships, admitting the lyrics are semi-biographical.

On their thirdEP, LUJULILE, Uju carry on this exploration and fusion of genres. Below we chat to Ntutu about the EP, which is their first release since 2010’s Free album.

The EP has been seven years in the making. We parted ways with Sony music about four years ago, and have had to finance the album ourselves. We worked with different people at different stages of the production. An initial recording was done last year for a movie project, but those recordings did not make it to the final product. What you hear now was produced by the band with Mpho Hlahla providing the technical support at Jaspa studios in downtown Johannesburg. This process took us just over four months from guides through to recording and eventually post-production and mastering.

What's the concept of the project?

The concept was really just a need to record and document the band’s repertoire that was written and performed over the last seven years. It also captures the metamorphosis of Uju from a seven-piece to a five-piece band, and eventually the current version as a stripped down and raw four-piece. We don’t look at the EP as a project in the traditional sense of a conceptual design with a deliberate beginning and end. It’s more of a need to mark a point in the legacy of Uju and the music we create at different stages in the band’s life.

Your music has rock, funk, jazz and other influences. What's behind your choice of sound on LUJULILE?

The influences you hear are generally a reflection of each of the four individuals’ own references. It isn’t necessarily a deliberate attempt to achieve a particular sound. It’s more of a snapshot of where we all are creatively at any given time and it evolves with our changing tastes and artistic experiences.

What more can we expect from Uju this year?

The digital launch of the EP at the beginning of August is the first step towards releasing the music into a broader audience. This will take the form of becoming more active on social media, traditional media and hopefully working towards radio airplay. We will also tour the album through a series of gigs, starting in Johannesburg and surrounds. As the music spreads, we will expand our live performances to other parts of the country. We also intend to take the music internationally to Europe and other parts of the world. However this is subject to us securing a partner and dependent on how the music is received.