Sons And Daughters Of The Fire: A Dispatch From Yesterday's Cape Town Student Protests 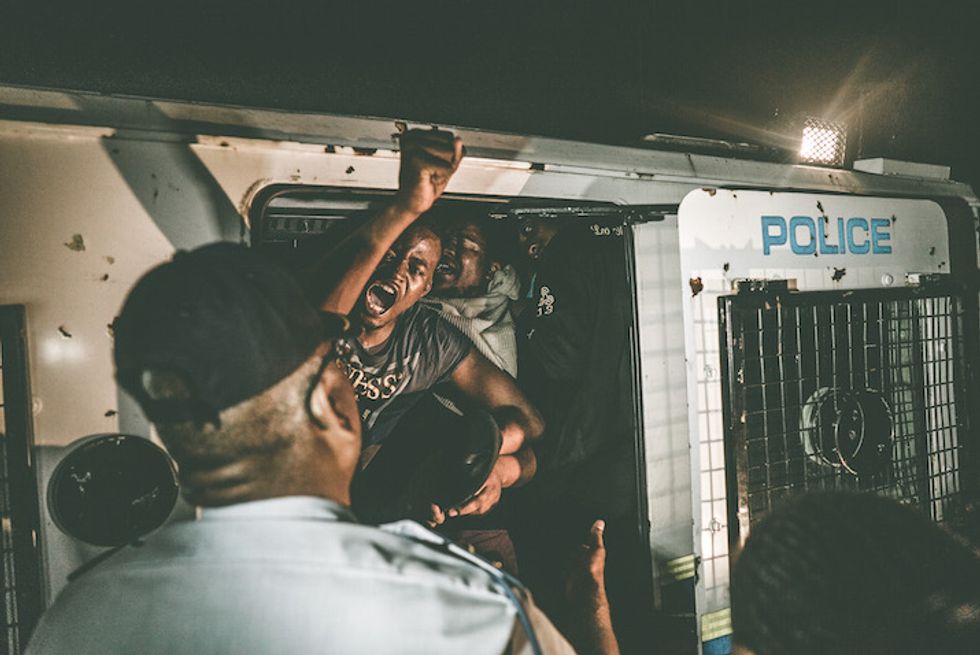 Imraan Christian documents the #FeesMustFall protests as they turn from peaceful demonstration to police standoff in Cape Town.

All photos by Imraan Christian

Last Wednesday, October 14, students at Wits University in Johannesburg began protesting in response to a proposed 10.5 percent hike in tuition fees for the 2016 school year. On Monday, the protests spread to Grahamstown's Rhodes University and the University of Cape Town.

Cape Town-based photographer Imraan Christian was on the ground to document the #FeesMustFall protests as they turned from peaceful demonstration to police standoff. Below is Christian's account from day one of Cape Town's student protests.

Yesterday, students at the University of Cape Town, led by a majority of young black radical women, followed the example set by their peers at Rhodes and Wits and shut down the entrances to their university to protest outsourcing and tuition increases.

The peaceful protest became a scene of horrific brutality, however, when police were given a court interdict allowing them to forcefully remove students from the premises. Students were attacked with stun grenades, threatened with loaded weapons and tear gassed. In one instance, the police Hippo [armoured personnel carrier], overloaded with 25+ UCT students, attempted to leave the premises, and as the students protested, the police set off 4-5 stun grenades and tear gas.

Forty people were detained and many injured last night, but the effect was that thousands of students were mobilized to occupy the streets of Rondebosch outside the police station in protest. Once everyone was released we sang protest songs until early in the morning and prepared for the next occupation which is happening today.

Despite all of this orchestrated violence, no amount of tear gas or stun grenades could stop the fire of connectedness I know many of us felt last night standing next to brothers and sisters of all races against what is clearly a manifestation of a deep-rooted evil. An evil that merely swapped masks after apartheid.

"Sons and daughters of the fire" is kind of what we all felt last night, being there together, occupying the streets. It was like a force of old liberated us to the point where we could feel each other's strength. The unity will be something I will remember forever.

The shut-down of UCT will continue today, with a mass meeting happening at 1pm, so if you consider yourself an ally, it’s time to walk the walk.

I won’t speak more about yesterday, as words fail to capture the electricity of a deep knowing that these moments and the moments to come will define history. History that we are creating together.