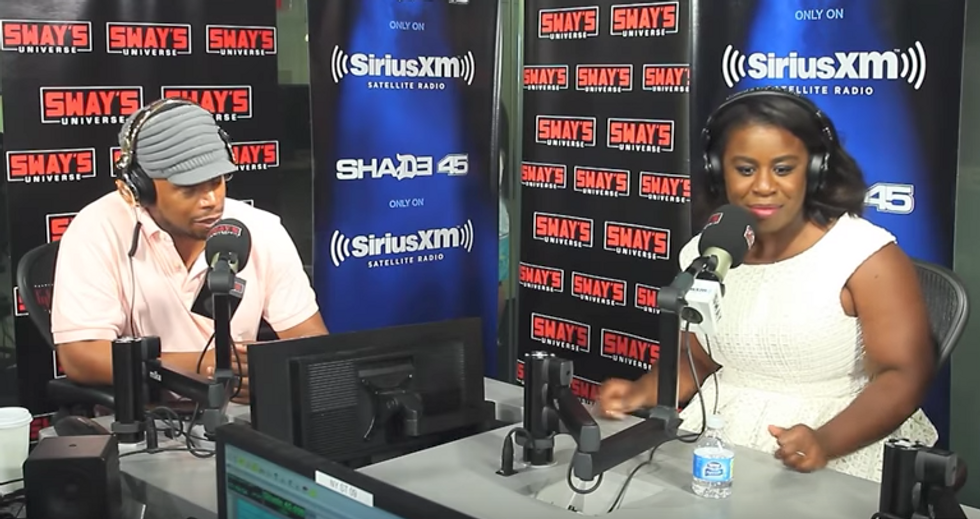 Things We Learned From Uzo Aduba's Sway in the Morning Interview

NEW YORK CITY—Nigerian-American actress Uzo Aduba known for her portrayal of Susan "Crazy Eyes" Warren in Orange is the New Black is currently doing press rounds promoting the new season of the show.

She stopped by Sway in the Morning to talk about the hit TV show, her Nigerian roots, and her childhood.

It's always a pleasure watching her do what she does so well: deliver quick-witted lines and dropping memorable anecdotes from her Nigerian upbringing.

Below are 9 things we learned from their conversation.

She became an entertainer thanks to a dedicated teacher

Before a teacher intervened, Aduba had never considered becoming a performer.“I thought I was going to become a lawyer until a teacher of mine came and kept me after class one day and said she thought I should go into performing arts,” she tells Sway.

She was an opera singer

Before she graced our television screens, Aduba was a performing opera singer. She even went to school for it—something her Nigerian extended family did not understand. As a treat to listeners, Sway made her perform an exclusive hip hop opera freestyle. Check it out below:

As a child, she wanted to change her name

Tired of teachers constantly mispronouncing her name and her peers laughing, she one day came home from school and asked her mom to call her Zoe. In typical African fashion, her mom had a quick retort at hand. “If they can learn to say Tchaikovsky and Dostoevsky, then they can learn to say Uzoamaka.”End of discussion.

How the cast reacted to Poussey’s death

Aduba reveals that the cast was devastated after hearing of Poussey’s death—echoing how many fans felt about the ending of season 4. On a more personal level she confesses that she dearly misses Samira Wiley.“She was in the ghetto dorm with us and I got to shoot with her every day so selfishly I was upset that I don’t get to have that experience with my cast member and friend on a daily basis,” she says.

More than losing Poussey/ Samira Wiley, she really took to heart how the character was killed-off

Poussey died from asphyxiation muttering "I can't breathe,"  in a scene that was hard to shoot and hard to watch given that it so closely resembled the way Eric Garner was brutally murdered. "At the time when we were making it we were seeing people on the news, it felt like every other day, losing their lives at the hands of law enforcement, and to see the play out on our show just further underlined that pain that you’re experiencing and living, it was tough,” she says.

Her hometown had a scared straight program

Aduba initially auditioned for another part

Aduba actually auditioned for the role of athlete Janae Watson. She thought the role was a great fit since she ran tracked in high school through college. So she was a little stunned when the producers called her back to audition for the part of Suzanne “Crazy Eyes” Warren. “It makes you wonder what part of the audition made them say, you know she’s not really quite right for the track star but she is most definite right for crazy eyes,” she laughs.

She’s in touch with a lot of her teachers

10 to be exact from kindergarten all the way to college—she even invited the teacher who inspired her to pursue a career in creative arts to her Broadway show.

She was vague about her favorite part of this season (she probably wanted to avoid spoilers), but she did give us some clues and scenes to look forward to—namely Crazy Eyes looking for heaven and the season finale.