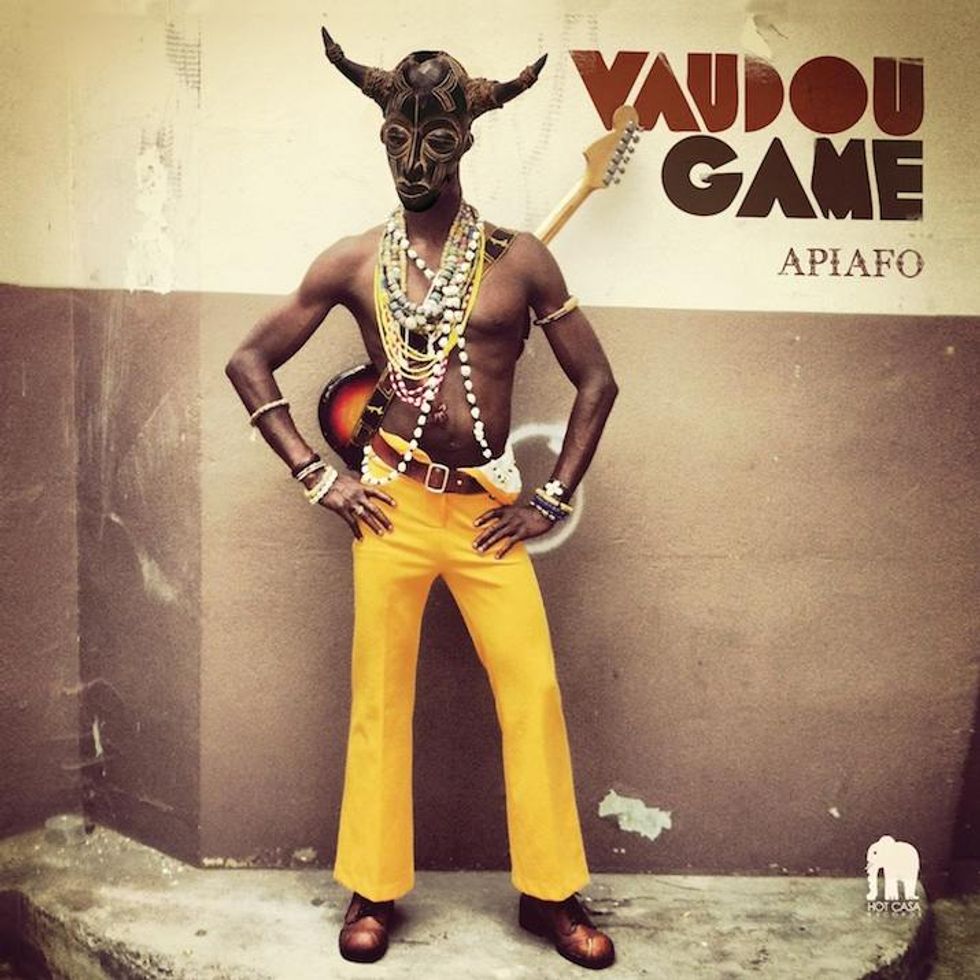 It may come as no surprise that the label housing the funk of Vaudou Game is Hot Casa Records, the Paris-based afro soul and tropical funk label founded by Julien Lebrun and Djamel Hammad. The link-up was natural and automatic, just like the sounds flowing from the group's forthcoming Apiafo LP. The record, which is due out September 22nd, delivers funky, danceable sounds that may seem new in jaded digital playgrounds. They've already won over the heart of Gilles Petersen, who showed them love when he inducted them into his record of the week club on BBC, and now the group is about to hit hard on the concert circuit.

The band of six is led by Peter Solo, a singer and composer born in Aného- Glidji, Togo, birthplace of the Guin tribe and home to voodoo culture. Solo is joined by Vicente Fritis on keyboards/backing vocals, Jerôme Bartolome on saxophone/percussions/backing vocals, Guilhem Parguel on trombone/percussions/backing vocals, Simon Bacroix on bass/backing vocals, Hafid Zouaoui on drums, and sound engineer Stephane Pauze. Their debut album Apiafo was entirely produced and recorded, mixed and mastered with old tapes and vintage instruments. Solo formed Vaudou Game in Lyon, France, with the vision of codifying the musical scales that are found in sacred songs of Beninese and Togolese vodun music. The terms "vadou" and "voodoo," which come from the word "vodun," refer to spirit and name a blended culture of voodoo practices from different West African ethnicities. Translating tradition into modern instrumentation, Solo states that he composed Apiafo based on the two main musical scales of voodoo tradition. The first track, "No Problem," comes out clean as it sets up the blueprints for the rest of the album to pull from tradition with a spirit of celebration.

The first of the two 'voodoo scales' that inspired Solo takes a deep draw off raw funk, linking in the flavor of 70s bands like L’Orchestre Poly Rythmo De Cotonou to El Rego. The funkiest tracks off the record, “Pas Contente” and “Wrong Road,” have guest vocals from Solo’s uncle, 70s soul pioneer Roger Damawuzan. Their collaboration on "Pas Contente" is a true highlight that smacks with psychedelic trance. The second of the two scales has never been translated for modern instruments. It evokes deep feelings and a sacred ambiance. The moving "Ata Calling" is an invocation to a supreme divinity, and a precious golden nugget off the record. The idea of integrating these haunting lines, sung in honor of the divinities, to an energetic 70s afro-funk was an obvious extension in Solo's mind of the analogy he found between this vodun tradition and Blues and Funk, as well as the R&B of James Brown, Otis Redding and Wilson Picket. “Meva” is another stand-out that moves listeners along the two scales. Upholding tradition with blazing psychedelic riffs, Vaudou Game are about to embark on a full European tour. See a list of dates and watch their latest video for "Pas Contente" below. Apiafo is due out September 22nd via Hot Casa Records.