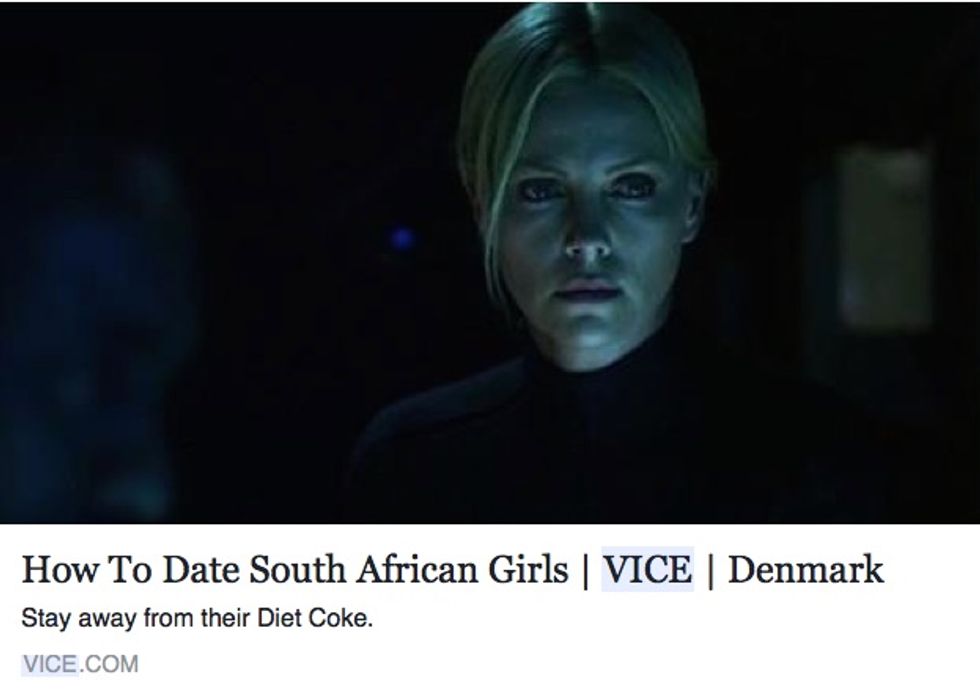 The article on Vice Denmark was a primer for “how not to write about South Africans.”

This morning, South Africans on social media were once again talking about a 2012 article from Vice Denmark that encapsulates everything wrong about frat-bro journalism. Basically, a primer for “how not to write about South Africans.”

For whatever reason, “How to Date South African Girls” had resurfaced, featuring that same photo of world-famous South African girl, Charlize Theron.

Surely it couldn’t be that bad if it’s survived the internet for four whole years. Oh boy was I wrong.

In the article, an Australian guy by the name of Jonno Seidler shares his tongue-in-cheek “treatise” on “dating South African girls,” which he uses to refer to rich and white South African-born women living outside of South Africa.

If you’re trying to access the full article via Vice, you won’t be able to. In the time between the article being resurrected by some Facebook user in South Africa and 30 minutes ago when I went to find the link to send to my colleagues, it was pulled down. “This article has been retracted following a review by VICE editorial,” it now says. You can however read the full text via this person’s Wordpress.

I can’t imagine something as horrendously misogynistic, racist and ignorant as Vice’s “How to Date South African Girls” would ever see the light of day in 2016. But considering it’s been one month since delusional white lady Louise Linton made her Telegraph debut, who knows what kind of fuckery will be written about the continent next.

And if you’re still wondering about the contents of Seidler’s checklist, I leave you with a few gems. And by gems I mean the most distasteful piece of writing you’ll see on the internet this week.

“The only dietary advice South Africans ever took to heart, aside from running 14 miles on the treadmill every morning while watching Oprah, is that sugar is the most destructive force in the universe. Most South African houses have wine cellars full of Diet Coke…”

“Because they grew up with servants in their homes, even younger South African girls who emigrated early on will still think that anybody with different colored skin exists purely to do shit for them. They will be horrible to waiters, concierges, car cleaners, valet attendants, retail workers, and anyone who has a name badge or is just trying to be polite. If you are remotely ethnic-looking, expect to always be treated like a second-class citizen. Add it to the list of things you should definitely not talk about until you’ve broken up.”

“Pronounced ‘ah-pwoar-tide.’ If you say it really fast it sounds like ‘opportos.’ Which is not funny. Nothing about apartheid is funny. Also, South Africans have no sense of humor.”

“...Before meeting you, a South African girl has had carnal knowledge of at least four or five boys from her tribe who usually look like her cousins i.e. much better than you and built like Channing Tatum in Magic Mike. Because you do not come off like a Boer Brad Pitt, you’ll never truly satisfy her anyway and 98 percent of orgasms will be faked. You can start cheating on her now because she’s almost certainly already doing it to you.”

“Dave Matthews comes from South Africa. That pretty much sums up the entire cultural experience you’re going to get here—a bland, unflinching dedication to shows like Grey’s Anatomy, where good-looking white people cry about the trials of being good looking and white while some annoying guy who could possibly be Dave Matthews moans monosyllabically…”