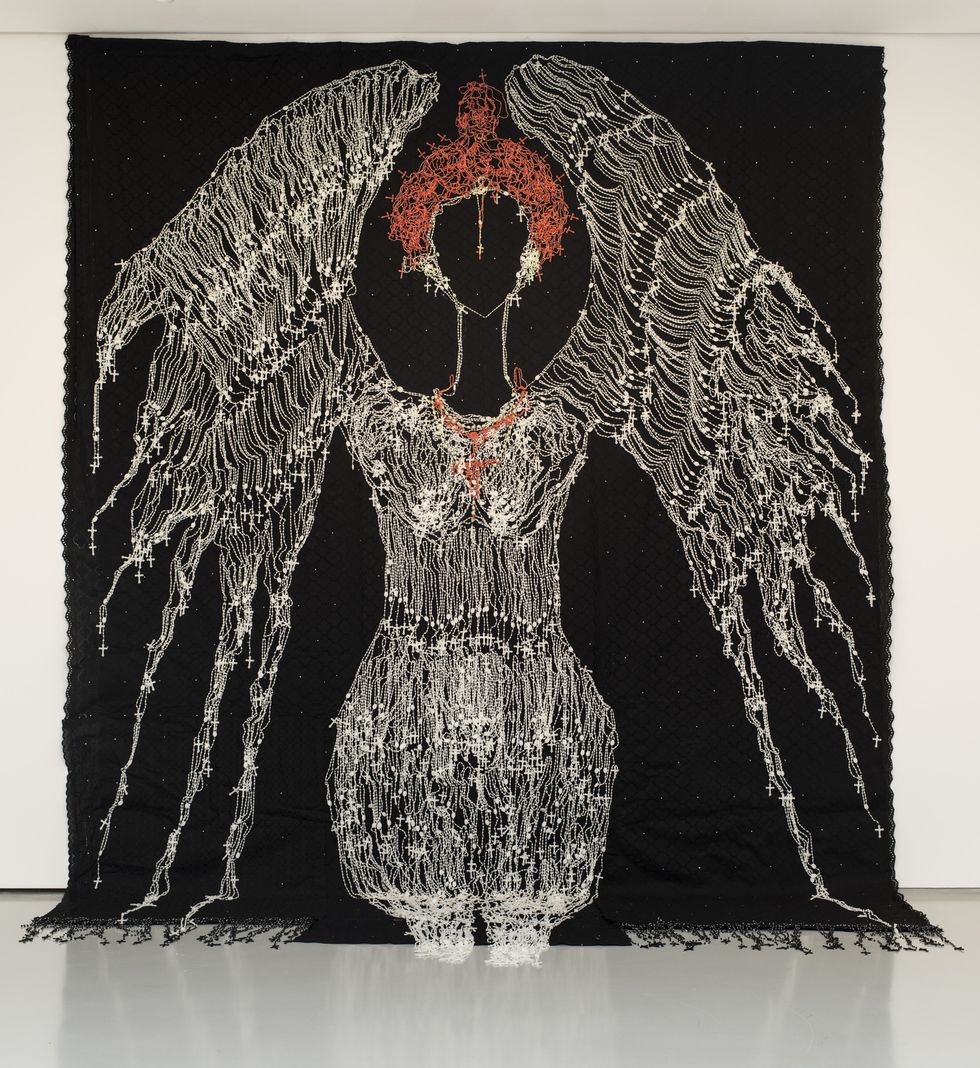 The Nigerian artist's latest is a direct response to last year's Venice Biennale in which sacred Yoruba art was stolen.

In May last year, Victor Ehikhamenor was at the center of a controversy with Damien Hirst, who he accused of reproducing the recognisably Yoruba headcast at the Venice Biennale in Italy. Referred to as the “Head of Ife," the naturalist work of brass is made from a lost wax technique dating back to the 14-15th century. It was discovered in Nigeria in 1938 on a building site in Ife, historically the heartland of Yoruba Kingdom as far back as 11th century.

“The British are back for more from 1897 to 2017. The Ooni of Ife must hear this," began Ehikhamenor in his Instagram post, which exposed Hirst's skimpily credited borrowing from the artefact which the British artist re-titled as “Golden Heads (Female)" at his own show at the biennale called “Treasure From The Wreck of the Unbelievable." The controversy overcast a notable achievement for contemporary Nigerian art; the opening of the country's first pavillion at what is considered the Olympics of the art world.

Ehikhamenor was one of three artists who represented Nigeria at the annual event in Italy, along with Qudus Onikeku and Peju Alatise. His own installation, “A Biography of the Forgotten," was the subject of a separate dispute, this time with the owners of space set aside for the Nigerian pavillion who said they had researched the images in his work and consider some to be associated with rituals that are not appropriate to the Christian religion.

“What they didn't know is that the Prayer Room was more religious than what I've done," he tells me at the opening of his exhibition at Tyburn Gallery titled “In The Kingdom of this World." In March, the gallery will present a solo project at the 12th edition of Art Dubai by Ehikhamenor, who is also one of the resident artists at the annual fair. The title of the show is in tribute to Ojiso which in Bini translates to “King of the Sky" and refers the the creation story of the first ruler of the Benin Kingdom in what today is southern Nigeria.

How did he feel when he received the email from the Nigeria team relaying the problem?

“It came as a surprise and initially I was quite angry, then I realized that there's nothing that can be done, you just have to make your statement and stand your ground. I wasn't going to change my work for them."

Had the allocated space been the only one available at the biennale, he may not have shown his work at all. “So imagine what is not being said that make African art or work from Africa not to get to certain places. This will detect where the works go, how much can this work go for and all of that," he explains.

With its focus on the origins of the Bini people and the intersection of their religious beliefs with the Christianity brought in by the Portuguese in the 16th century, are the works he's made for “In The Kingdom Of This World" a direct reaction to the near debacle at the biennale?

“It's a direct reaction. Something has to be a catalyst at every artistic point in life," Ehikhamenor says. “I'm just wondering if it was an American that brought those works that has bronze in them, would they call it fetish? So it goes back to the skin tone, your continental bondage and luggage that we have to carry. And at what point do we have to look beyond people and look at works for what they are?"

The three wall installations in the exhibition are the largest at 262 x 177 x 10 cm and stretch from the ceiling down and close to the floor: “I Am Ojiso, The King From Heaven," “My Last Dance As King Before Sir Harry Rawson's Army Arrived" and “I Am The Queen Idia, The Angle Of Kings." The first two are images of Ojiso, who is believed to be the founder of Benin Kingdom, and Oba Ovonramwen who reigned before the British conquest of 1897. They were made using chaplet rosaries which the artist fashioned from gold, white, bronze and coral beads, which are sewn onto perforated black lace fabric, itself mounted on a sturdy canvas.

The ornate assembly does convey the majesty accorded to both founder and later king, especially because coral beads are of utmost importance as indicators of wealth or high office—the equivalent to the insignia of knighthood. Syncretism is no more than a necessary compromise of an often indigenous and imposed religion, a practice which historically has been not just a common feature, but required for the propagation of the Christian faith. Ehikamenor's approach is a simple and clever way to depict this fusion which has evolved over the centuries.

The second set of works are designed perforation on paper, nine of which were on display at Tyburn, each depicting different figures with explanatory titles as such: “I'm Am Ohen, Custodian of Memories," “I Am Odibo, I Followed My King To The Grave" and “We Are Uzama-nihion, The Seven Kingmakers." The holes which give the works simplicity and elegance of shape and character are in fact detailed drawings the artist made on the reverse side with ink pens.

At first, clueless framers he went to would make the inked drawings the face of the works, until he corrected them. Why are the less striking surfaces more important?

“I like the purity of it, I like the way it breathes, the way it gives you a certain calmness," he says. “It has that celestial nature to it which I find interesting."

The plain surfaces which must have seemed uninteresting to the framers as to be the actual work to be displayed are in fact an exercise in spatial dimensions which Ehikhamenor has undertaken, similar to ideas of art that speaks to the present “space age" in Lucio Fontana's “La Fine Di Dio" (1964) which in his native Italian translates to “The End of God." Fontana's stated belief was that “making a hole was a radical gesture that broke the space of a picture"—as did slicing a canvas, all of which is true of Ehikamenor's paper perforations.